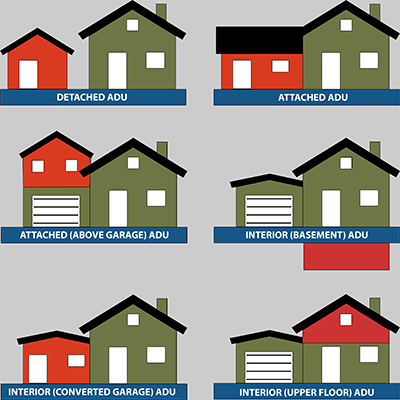 (Legalizing accessory dwellings in residential districts is one of the plan's recommendations | Image: APA)

This Wednesday, the Kenney administration released a new Livable Communities Action Plan developed in coordination with AARP’s Livable Communities Action Network, which comes with a long list of recommendations for changes to major areas of city policy in housing, transportation, and public space that would make the city more accommodating to people of all ages, and seniors in particular.

The plan is noteworthy for in many instances going much further on some housing and transportation issues than the administration has previously been willing to tread, with prominent support from Councilmembers Kendra Brooks and Derek Green, who lead the Council Committee on Intergenerational Affairs and Aging.

The significance of the plan is that it was developed by AARP and a 23-member coalition of groups with diverse interests and perspectives on the issues in question. The planning process combined qualitative in-person outreach to community groups across the city, directed by AARP, along with more in-depth policy-focused deliberation by committees of advocates and practitioners for each of the broad topic areas. Maria Gonzalez of HACE CDC, who is also the board chair of Philadelphia Association of Community Development Corporations, led the housing committee, Sarah Clark Stuart of the Bicycle Coalition led the transportation committee, and Shalimar Thomas of North Broad Renaissance led the public space committee.

The end results could be considered a rough consensus agenda for what many of the non-profits working in these issue spaces all agree on, and the circle of agreement turned out to be conceptually wider than what the administration has committed to in the past, containing some ambitious recommendations like:

- Evaluate drivers of construction costs and make recommendations for how to bring costs down (e.g. parking minimums, labor rate for affordable housing development).

- Encourage housing developers to use universal design concepts for new housing to support visitability and accessibility.

- Promote the allowance of Accessory Dwelling Units (ADUs or “granny flats”) as a right in residentially zoned areas to increase affordability and allow more seniors to age in place.

Some of these ideas are brand new commitments from the Mayor, while some others have shown up in weaker forms in the Mayor’s Housing Action Plan, and others mirrored items from City Council’s Poverty Action Plan.

There are dozens of recommendations in the plan, and what’s highlighted above doesn’t adequately summarize them, but some of these items were of particular interest because of how they run afoul of the density phobia some key members of City Council have. One important piece of subtext in the document is that aversion to higher-density housing is a priority that needs to fall in relative importance, if the city is going to make gains in accessibility, mobility, or aging-in-place living choices at any real scale.

Long-time observers of Philadelphia politics will be skeptical that City Council would really take the affordability and accessibility side of the density trade-off, but the good news is that the 2020 class of local elected officials keeps writing it down in all these official places that they want this, so there’s plenty of grist for people to hold them accountable for making it happen.