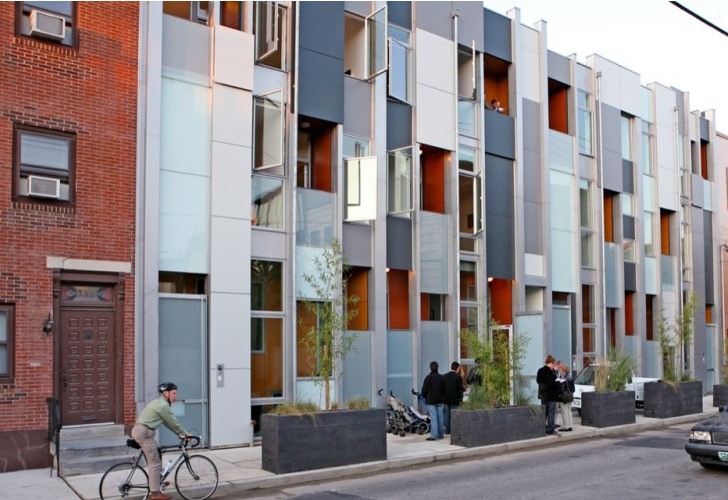 Affordable housing advocates demonstrated in Council last year in opposition to a move to open up the city's Housing Trust Fund to "workforce housing" projects, which are targeted at lower-middle class residents instead of the lowest-income residents. That measure still passed, but advocates had a good point: if there are only so many public dollars for affordable housing to go around, the most housing-insecure groups should come first.

But it's still unfortunate to see middle-class people and low-income people being pitted against each other in a Hunger Games-style contest for housing, since the middle-class housing problem is also very real and not getting political attention appropriate to the scale of the problem. People eligible for workforce housing in Philadelphia can make only up to 120% of Area Median Income, and sale prices can't be more than $230,000. Here's what that looks like for different household sizes.

Local housing costs and local incomes have been out of sync for a long time, and not just for people in deep poverty. The City has tried to address the middle-class housing issues with policies like the 10-year tax abatement on improvements or subsidizing very small numbers of workforce housing, but they haven't come close to supplying enough housing for people on the lower end of the middle-class earnings scale. Even if we quadrupled the amount of funding allocated to the Housing Trust Fund, we still wouldn't come close to meeting that need. And in many instances, City Council has tried or succeeded at making the problem worse.

A new bill from Council President and 5th District Council member Darrell Clarke is a good example of this. Clarke wants to ban duplexes (two dwellings on a single lot) in North Philly neighborhoods around Temple University for vague "neighborhood character" reasons, which almost certainly originate from resident complaints about students, parking, trash, and other issues common to areas around large universities.

Without minimizing the annoyances of living near a lot of undergrad students, it's difficult to see how a ban on duplexes would help matters in any concrete way. And while it's perhaps most defensible near a university, Clarke's made no secret about his desire to prohibit multi-family housing in a much broader are of the city—not just near Temple. That's what his new Council-controlled Zoning Code Review Commission will likely be recommending.

But if the goal is to achieve much more abundant housing in the workforce housing price range, the starting point has to be first legalizing low-cost housing all over the city. Rather than banning everything except for single-family homes, we should be using zoning rules to get as much low-cost housing as we can get for free.

Legalizing the low-cost housing that people want to build anyway, without public subsidies, has an obvious advantage over spending $400,000 per unit to create workforce housing units with public dollars, which is that it doesn't cost us anything besides Planning Commission staff time to simply allow more housing variety via the zoning code and zoning mapping.

And if people still find new duplex and triplex units too pricey, the zoning reform tool still isn't tapped out yet, because we're still not exercising the option to legalize and regulate SRO's, as L+I's Dave Perri has suggested Council do, which would further reduce cost barriers to private housing. As Akira Rodriguez points out in PlanPhilly, setting the bar to access private housing all the way up at single-family dwellings worsens our affordability challenges.

Akira Drake Rodriguez, a postdoctoral fellow of city planning at the University of Pennsylvania, said that single family homeowners often have disproportionate power to other residents, especially for politicians who are elected by narrowly defined geographic districts or wards. Even though the constituents who testified in favor of Clarke's bill were all African American homeowners of modest means, Rodriguez argued that banning multi-family variances would still be counterproductive to larger goals of affordability and equity.

“I empathize with Councilman Clarke’s district, which has no doubt been disproportionately forced to accept land use designations that wealthier and whiter districts do not,” Rodriguez said in an email. “But the City has lost more affordable units and added more market rate units, and banning multifamily (which often comes with affordable units) housing will only deepen these inequities.”

City Council keeps wanting to reduce more and more the types of inexpensive housing we can get for free if we allow it, and then making it up with a token number of workforce and affordable housing units that don't come close to matching the need.

As the new Zoning Code Review Commission weighs the successes and failures of Philadelphia's reformed code since 2012, they should pay special attention to this issue and opportunities to further reform the code text and the zoning map to get a lot more low-cost housing at no public cost.