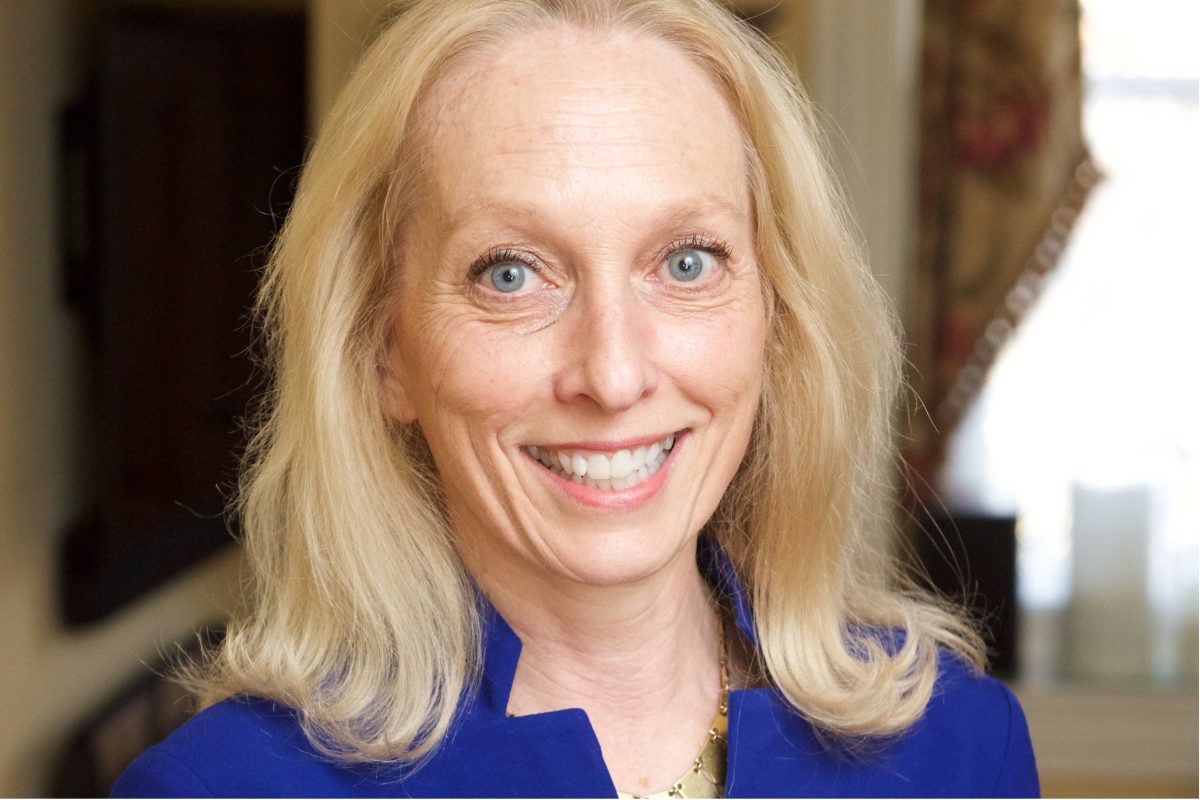 The results of our 'ranked choice' poll of the 5th Congressional District Democratic primary are in, and Mary Gay Scanlon won with 62% of the vote after 4 additional run-offs.

To be clear up front, this is is not a scientific poll. It was administered entirely online using the 'ranked choice' voting tool OpaVote, and it received a total of 84 votes over the last two weeks. We promoted it to our email subscribers, and also ran ads on Facebook to promote it outside of our usual base of support. There are some obvious problems with selection bias, and the demographics haven't been weighted to reflect likey voter demographics.

Still, the results have some value for identifying what high-information political partisans are thinking about the race, because they're paying the closest attention, and tend to have greater influence in primaries. A prior ranked-choice poll we did of the 2017 District Attorney primary showed huge support for Larry Krasner, and so did the eventual election results. Also, it provides some insight into which candidates are competing for which groups of voters.

This poll is a little different from the Krasner poll because Krasner won the first round of voting outright, making the ranked-choice element less exciting. This time, it stays interesting because no one candidate wins a majority until the 5th round.

In a ranked-choice election, the candidates with the fewest first-choice votes (Greg Vitali and Larry Arata, in this case) are eliminated in the first round. But their supporters' 8 votes aren't wasted—they are redistributed to their second-choice candidates. Molly Sheehan received half these votes.

That process played out over five rounds in total. Lindi Li was eliminated next, followed by Ashley Lunkenheimer, and Rich Lazer.

In the end, when the votes from those three candidates were reallocated to the final two remaining candidates, Mary Gay Scanlon had 44 votes (62%) and Molly Sheehan had 27 (38%.)

What does it all mean? You wouldn't want to read too much into it given the low sample size, but it also isn't vastly different from how local politicos have been handicapping the race. Scanlon seems to have a lot of supporters, and in this unscientific poll, she wins in both the first-past-the-post scenario and after all the run-offs. It's also interesting that Scanlon and Molly Sheehan benefit the most as candidates with less support are eliminated, at least among this group of respondents. 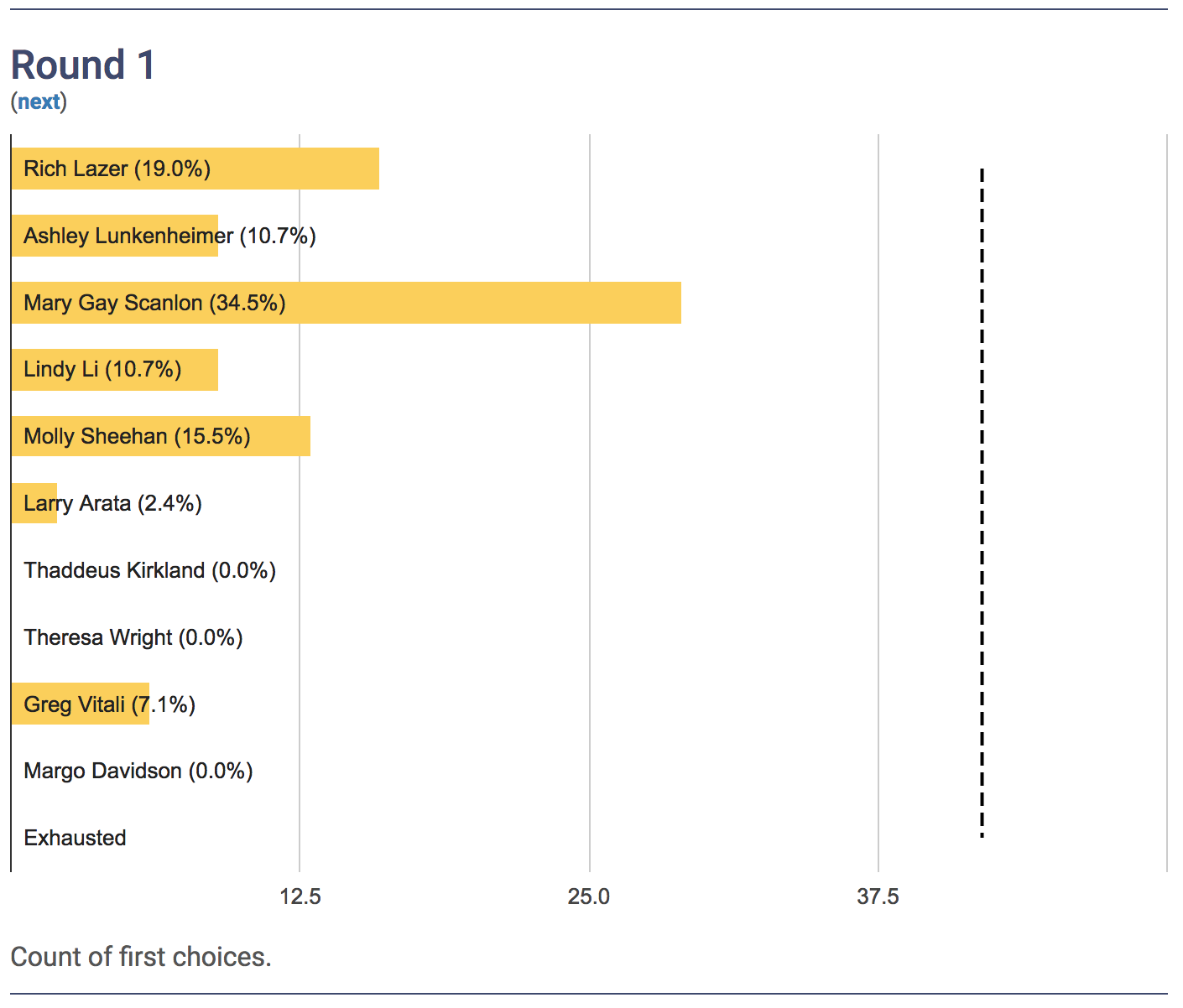 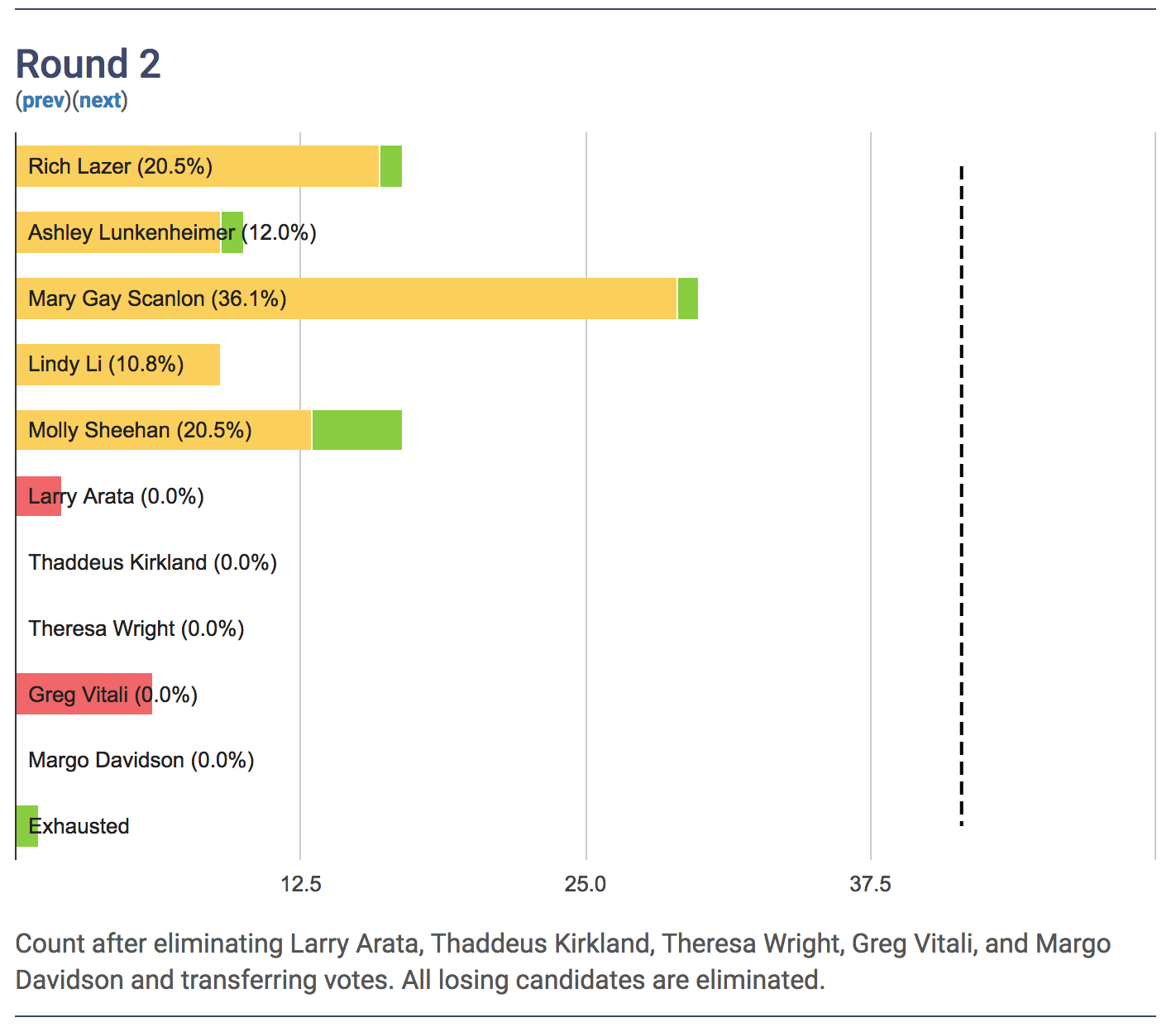 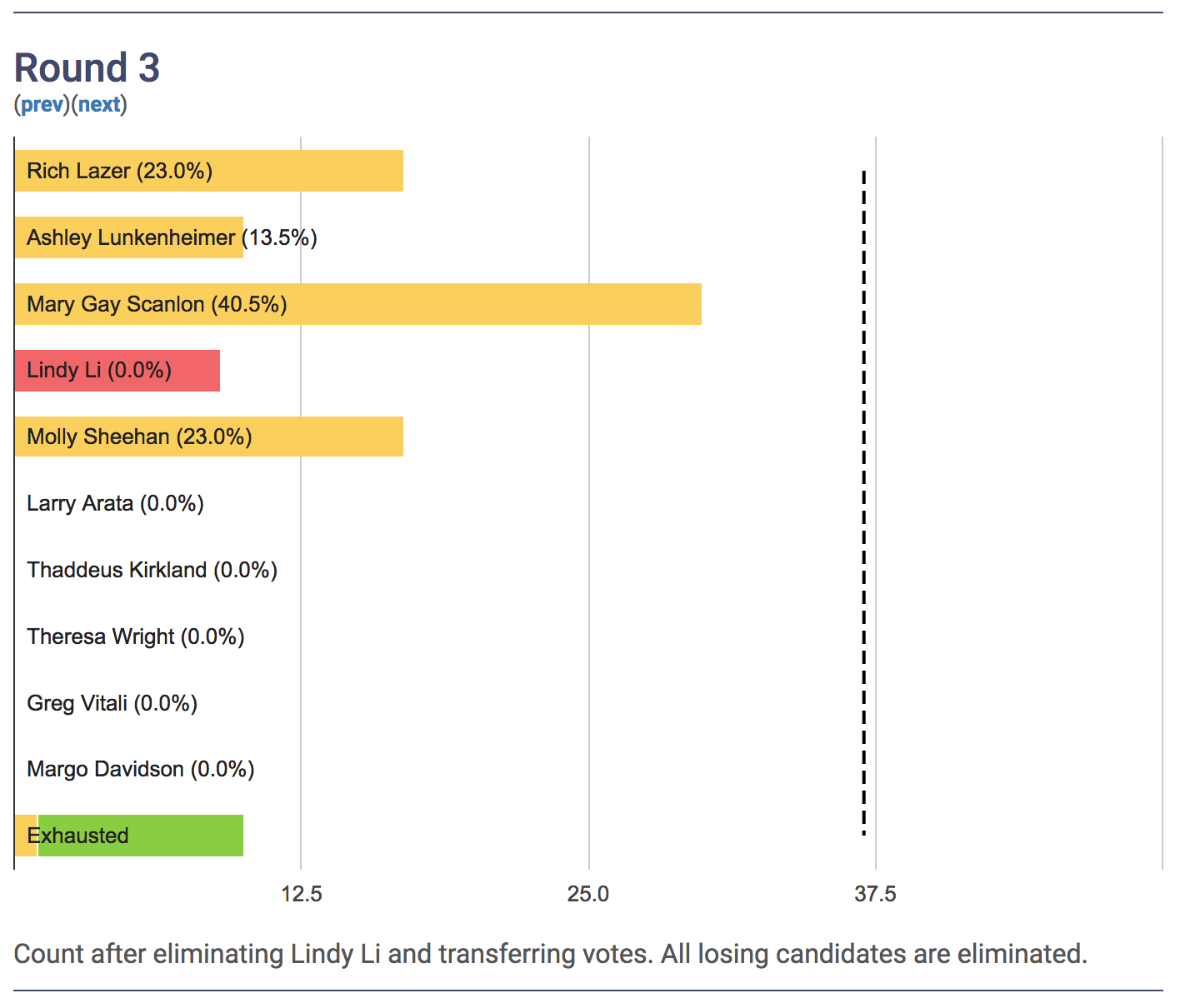 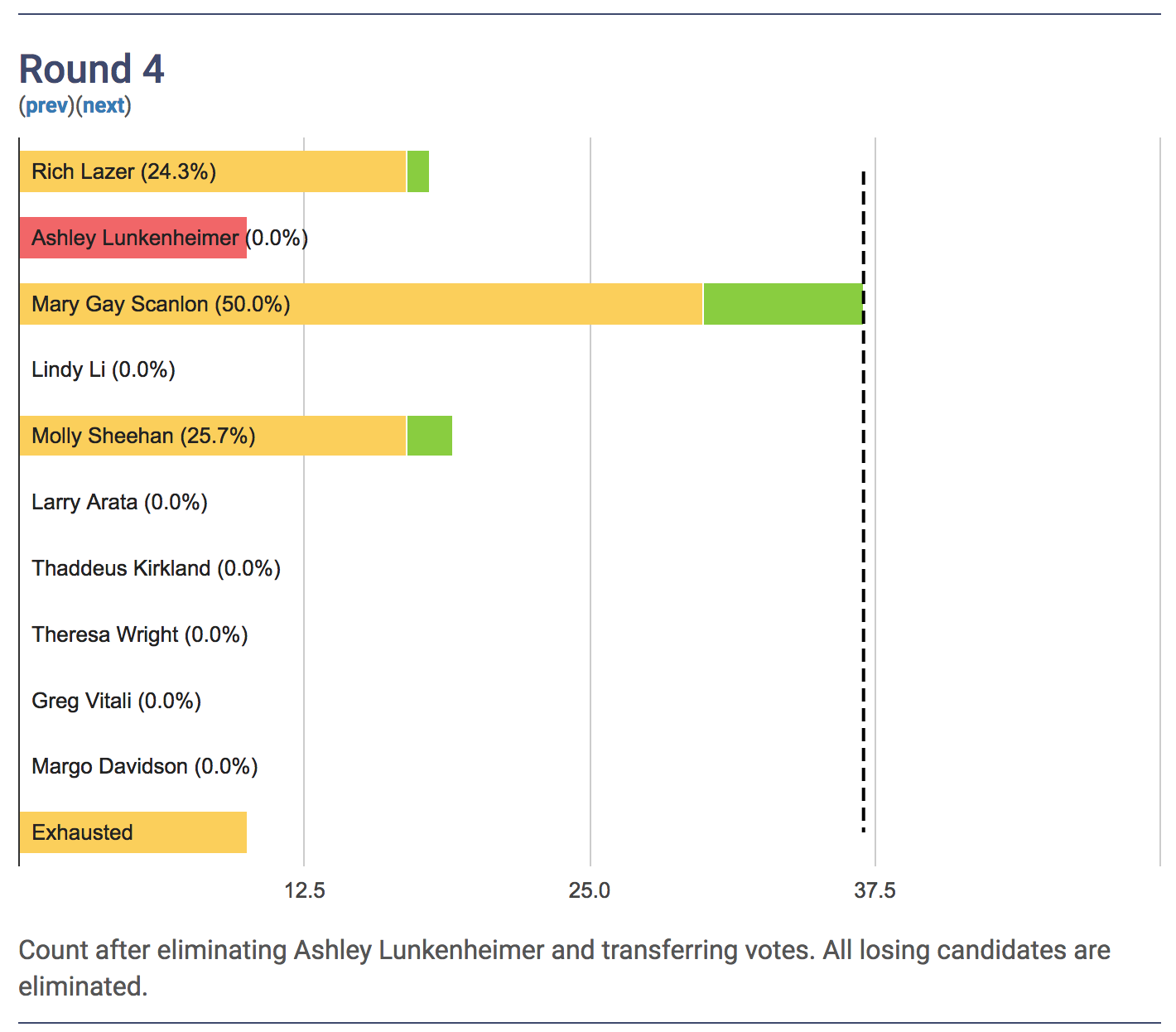 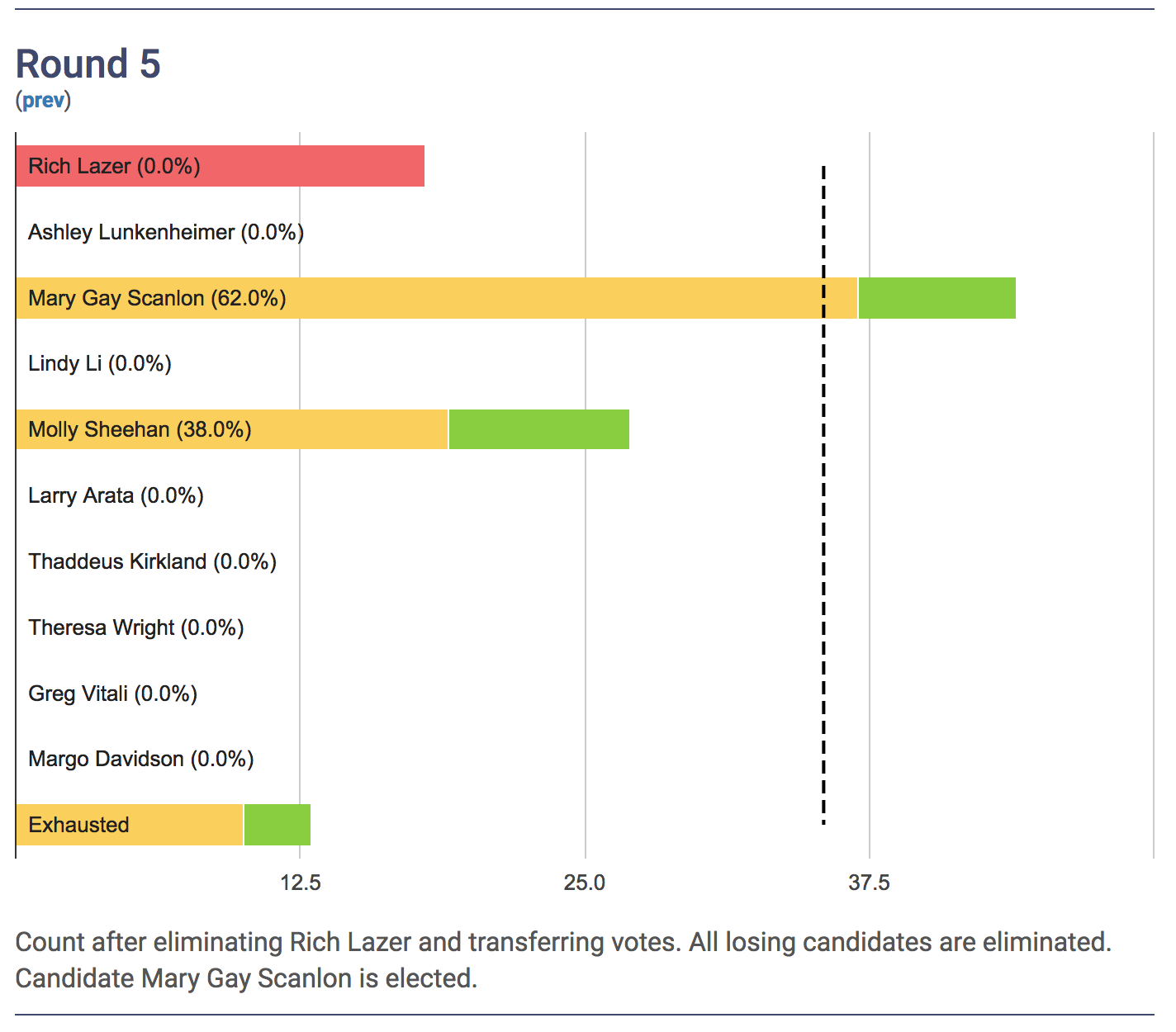 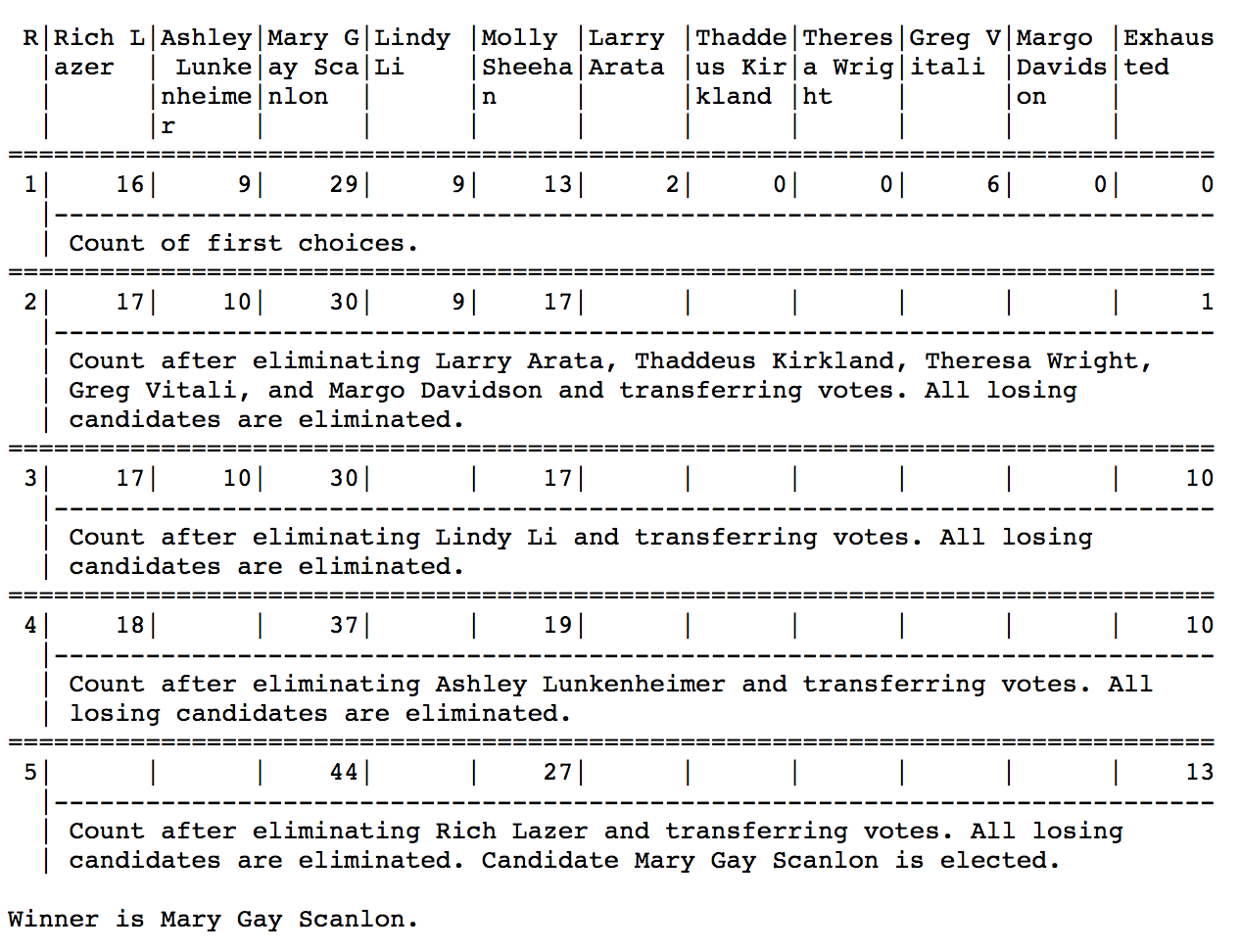