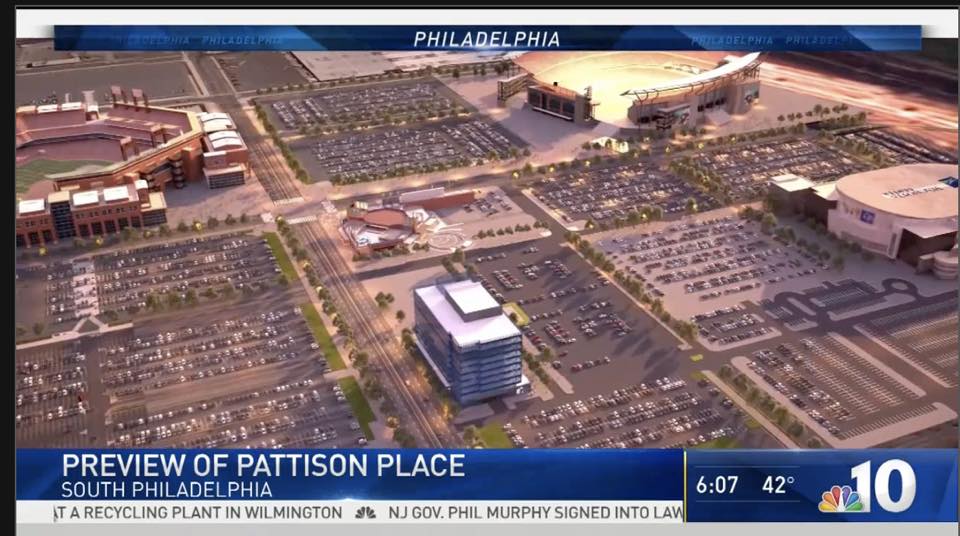 Philadelphia's Navy Yard office district has seen incredible growth over the last 20 years, and while that's been great for the city's economy, the area suffers from major transportation problems that, taken together, conspire to choke off that growth: the lack of a subway connection to the Broad Street Line, and the Navy's ban on residential housing in the area. Fortunately, there's a vast expanse of open land in the stadium district just north of the Navy Yard that features none of these problems, and would make a better target for the Navy Yard's future expansion.

Two recent articles from this week help point the way forward. The first article, from the Inquirer's Jason Laughlin, previewed three proposals from SEPTA for a Broad Street extension that contained some pretty bad news for project boosters.

First, the price tag of the project has somehow doubled since 2015. The cheapest options—a cut-and-cover approach that wouldn't require tunneling, and an elevated train—are for some reason off the menu, and the remaining options now range in cost from $869 million to $1.6 billion. If that's the sticker price now, the question we need to ask is what other possible transit capital projects might be a higher impact use of funds by comparison, particularly since the ridership projections currently aren't high enough to even qualify for federal funding.

The low ridership projections are partly the fault of the Navy's ban on residential development in the Navy Yard, which is something PIDC has been negotiating to have lifted for several years now to no avail. The lack of residential housing near the Navy Yard's office district means that every single person who works there needs to commute in from elsewhere every day, creating a major transportation problem. Essentially, continually increasing the number of employees working at the Navy Yard would mean continual increases in the number of cars and the demand for car storage, and continually worsening traffic congestion into and out of the Navy Yard during the morning and evening.

The shuttle bus services to the Navy Yard run by PIDC have been the one saving grace, and arguably the real headline story out of Jason's article is the news that they're actually going to be doubling the frequency of the buses from every 20 minutes to every 10 minutes.

"Now, shuttle buses ferry workers throughout the site but run only every 20 minutes, which is not as frequent as workers would like. The Broad Street Line has seven-minute headways much of the day.

On Tuesday, the Philadelphia Industrial Development Corp. (PIDC) approved $416,280 to be spent to run shuttles to the Navy Yard every 10 minutes, said Prema Katari Gupta, a senior vice president at PIDC. SEPTA also recommends eventually splitting the existing shuttle into two routes, one serving the western half of the Navy Yard campus and the other the eastern half."

PIDC wants to double the number of people working at the Navy Yard to 30,000 from the current 13,000, but it's hard to imagine how they do this without the subway extension, and it's hard to imagine how they get the federal funding for the subway extension with the current ridership projections—which are low because of federal inaction to lift the Navy Yard housing ban. It's possible that both of these problems will get fixed, but how soon? Having established the Navy Yard as a growing employment hub, we need a Plan B for its continued expansion.

That brings us to the second article from this week, where Jacob Adelman reports that Comcast Spectacor plans to build an 8-story mixed-use office building near the Wells Fargo Center, an area that currently looks like this:

That's obviously a ton of open land that already has great subway access, and wouldn't require $1.6 billion in transit improvements to serve a growing employer base. It's currently devoted mostly to stadium parking lots, but there's no reason why a few parking structures on site couldn't accommodate the exact same number of spaces if necessary while using up only a small fraction of the land area.

Adelman says that Cordish, the developer, is marketing the site's access to the Broad Street Line subway and proximity to the Navy Yard and Philadelphia International Airport as part of their pitch to prospective tenants.

"Plans for the tower, which could rise eight or more stories, follow the start of $250 million in renovations at Wells Fargo Center, which include new floors and seating, enlarged corridors, and upgraded windows.

A video prepared to market the office space touts its location among the home venues of Philadelphia’s football, baseball, basketball, and hockey teams, its public transit access to Center City via the Broad Street Line subway, and its proximity to the expanding Navy Yard office and industrial complex and to Philadelphia International Airport.

Weinberg declined to share details of any other plans for the 47 acres of city-owned land in the area that Comcast Spectacor has the right to develop through a ground lease. Now, the land is used mostly for parking.

Outside Philadelphia, Cordish has led the development of retail, entertainment, office, and residential districts surrounding sports arenas in cities including St. Louis and Kansas City, Mo."

Looking at the property records on Atlas, it turns out nearly all of this land is already owned by the City, so elected officials have significant say over what the land use should be like here. Currently the zoning is mostly SP-STA, or the Stadium Special Purpose district, which seems to allow the city to essentially play Sim City here doing land use policy through deed restrictions and changes to their Master Plan, as opposed to regular zoning (which isn't so different from how development is approved at the Navy Yard.) The Navy Yard and the stadiums are both in the 2nd Council District, currently represented by Councilman Kenyatta Johnson. 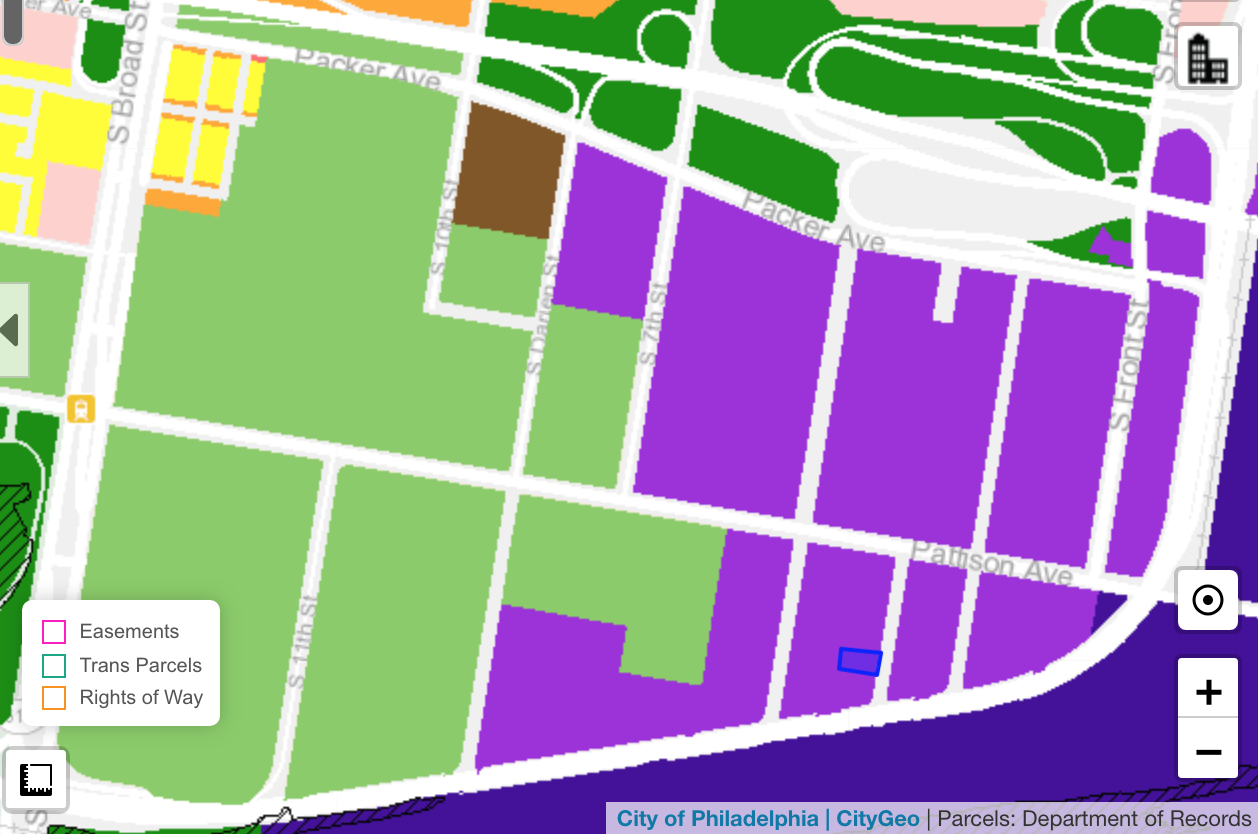 If Johnson wanted to, he could rezone this whole area for regular mid-rise and high-rise development like in Center City, and subdivide the parking super-blocks into more manageably-sized parcels that could be developed in the usual piecemeal way, rather than by a single large developer. The City could even continue to own the land and use ground leases to achieve their desired policy outcomes.

Even if the City were to create more commercial development opportunities on their land in the sports complex though, one major factor that would continue to favor the Navy Yard over the sports complex as a future growth hub, all else being equal, is the Navy Yard's designation as a Keystone Opportunity Zone, which confers some large state and local tax breaks on companies who choose that location. But it's hard to know what would really happen, since companies and developers do still choose sites outside of KOZs all the time for commercial development, and the sports complex also has a good value proposition in being close enough to the Navy Yard, but with subway access.

Given the existing control of vast amounts of public land, the prime location near an existing underused Broad Street Line station, and the disappointing results of SEPTA's Broad Street Line extension proposals, it's a good idea for city leaders to start putting more thought into bringing the Navy Yard commercial district north, rather than taking the Broad Street Line south.