Jeff Kneuppel Out, Leslie Richards Likely In as Next SEPTA General Manager 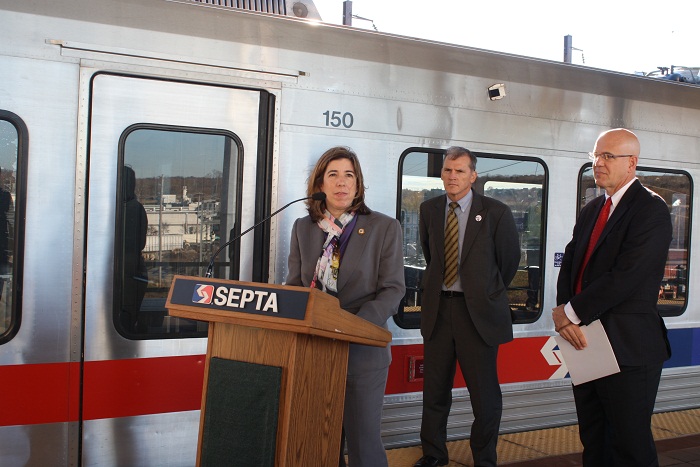 Multiple high-level sources inside the agency said that PennDOT Secretary Leslie Richards is being seriously considered as the next GM. Busch said the SEPTA board has not selected a final candidate, much less met to vote on a replacement.

Without being able to say for sure how Richards would differ in practice as General Manager, the choice nevertheless signals some important differences in perspective. Kneuppel served for 30 years with the Authority, first as an engineer and then working his way up to Assistant GM during the 2000's before eventually ascending to the top job. Richards' background is in urban and regional planning. She has a Bachelor's degree in economics and urban studies from Brown University, and a Master's Degree in regional planning from Penn. As PennDOT Secretary, one of Richards's signature initiatives was the PennDOT Connects effort to improve the public planning and engagement processes around large capital projects.

Her PennDOT bio page emphasizes her investment in "a broadened planning and project development process that considers input from all stakeholders reflecting a truly multimodal approach," and she also chairs the AASHTO Council on Active Transportation. AASHTO is the national professional association for state transportation officials, and given the propensity of that group as a whole to advocate for major highway projects and new road capacity as spending priorities, it's fairly revolutionary that it even has a Council devoted to active transportation. The Council was first created in 2017! That Richards became the leader of this group says something encouraging about her and the direction she'd take SEPTA.

Richards was also rumored to have been spotted house shopping in Center City recently, so it's possible she will even live in Philadelphia if hired as GM. Jeff Kneuppel, the current GM, lives in Perkasie in Bucks County. Representing a regional agency, all perspectives are valid of course, but there's no getting around the basic reality that somebody who takes city buses to work is going to have a different day-to-day perspective on what matters for transit than somebody who drives to a regional rail park-n-ride. She's about the most urbanist of the possible General Managers SEPTA could plausibly hire.

That matters because SEPTA's governance structure is kind of like the U.S. Senate, in that it allocates two representatives to each of the 5 member Counties, rather than basing it on each county's share of the ridership—an arrangement that would give Philadelphia the dominant voice on the board. Fully 80% of SEPTA's ridership is in the City Transit Division, which doesn't even include the ridership from in-city Regional Rail stations. Philly makes up closer to 85% when in-city regional rail ridership is included. Meanwhile, regional rail projects receive the majority of the authority's capital and operating spending.

Transportation reporter Jim Saksa reviewed 10 years of SEPTA's spending back in 2017 and found a huge disparity in how the agency allocates its funding that disfavors the core transit service that carries most of the people in the system:

"Broken down into per-trip figures, SEPTA spent $4.12 in capital expenses per unlinked trip on Regional Rail, but just $0.85 for heavy rail and a mere $0.51 per trip on buses. (Public transit agencies commonly use per-trip costs as a measure of financial efficiency.)

Looking at operating expenses, Regional Rail comes out on top again. SEPTA spent $2.8 billion on its railroad division during the last 10 fiscal years, compared to just under $9 billion across the rest of SEPTA’s operating divisions. That works out to $7.84 spent per trip on Regional Rail, compared to $2.98 per trip across the rest of SEPTA’s modes."

It's hard not to see this outcome as a function of the mismatched governance structure, and the political needs of SEPTA to maintain the favor of a large bipartisan coalition of southeast legislators to secure the state funding that is the Authority's largest revenue source.

But while it's important to maintain reasonable expectations for what even the most urbanist General Manager could do to rebalance things, there are still some critical changes that are either in the works, or within the realm of possibility, that Richards could do to make the parts of the transit system work better that serve 85% of the riders.

The Authority is considering phasing out the $1 transfer fee next year, for instance, but it's not a done deal. A strong signal from the new GM that this is a priority could get it over the line. And a Richards hire would also be a signal that the agency is revaluing the importance of public planning capacity—something it's traditionally not prioritized—and this could be taken as a sign that SEPTA is committed to doing important in-city projects well, like the Comprehensive Bus Network Redesign and trolley modernization that are going to require a lot more public engagement than the authority is used to doing.

SEPTA is at a critical juncture right now in its history. As much as 40% of their management will be retiring over the next decade, the SEPTA board could substantially change after the County elections this November, and major challenges loom from expiring state transit funding, increasing downtown congestion, and possible competition from autonomous vehicles somewhere on the horizon. The choice of new top leadership is the most important decision the board will make about the future of transportation in our region for a generation.