One of the big municipal success stories of the COVID era was the discovery that city processes really can become a lot more flexible very quickly when there’s the political will to make them so. Inga Saffron takes stock of a few ways that played out in Philadelphia this year and what would be good to hang onto going forward after the pandemic ends, and the section about the change in street rules is worth dwelling on because it's a huge and unsung success story for permitting reform.

The pandemic shows we can recalibrate our relationship with our vehicles in other ways. Before the virus hit, it was heresy to suggest that neighborhoods should give up some of their on-street parking for other public uses. But in a desperate effort to help local restaurants survive, city and suburban officials have been able to transform dozens of spots into outdoor dining rooms with barely a word of protest. While the furnishings at these “streeteries” range from rudimentary assemblages of planters to architect-designed cabins, they would improve greatly if streeteries became permanent. Surveying the eclectic canopies lining the 1500 block of Sansom Street, Sam Mink, owner of the Sansom Street Oyster House, said the block, and others, should “never be reopened to cars.” He’s right.

Street rules are an area where city government has been incredibly rigid pre-pandemic, with no appetite to take on anything related to curb parking or street use. It's the true third rail of city politics going back decades. Any time it's invoked, people invariably bring up the example of South Philadelphia residents throwing rocks and fruit at Mayor Dilworth in the 1950's for proposing paid permit parking. But then the pandemic hit, and some big changes became easy after a few months of heroic bureaucratic maneuvering and advocacy.

With indoor occupancy capped at a low level, the need to move most indoor activity outdoors for bars and restaurants created a space crunch that eventually forced politicians to deprioritize the usual taboos around messing with street parking.

And the need to act very quickly necessitated a pivot from what had been a City Council ordinance process that could take up to a year—even with a Councilmember’s support—to a by-right administrative process with an online application, where most people would receive their permits in about 3 days.

This idea was the brainchild of the hospitality working group convened by Councilmember Allan Domb's office, which included representatives from affected businesses, Business Improvement Districts, the Pennsylvania Restaurant and Lodging Association, the Commerce Department, Streets, and OTIS.

It was an incredible feat of policy-making, and the results speak for themselves. After Council put in place the new temporary rules for using sidewalk and parking lane seating, restaurants pulled a total of 798 permits (not counting any illicit streeteries) between June and today. 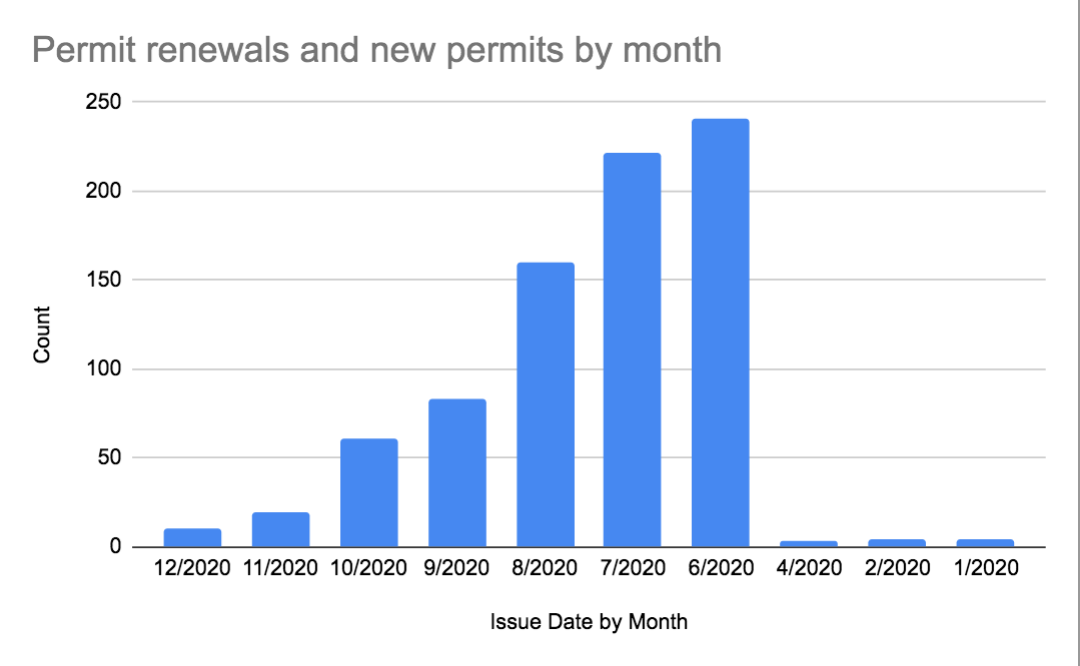 Prior to this, there had only been 282 regular cafe seating licenses issued for the entire city in the 16-year period between 2004 and December 2020.

Clearly, the emergency nature of the situation is what drove the 183% increase in the outdoor seating permits, but there’s also good reason to think there’s still a lot more unmet demand out there. The new permitting rules weren’t announced until June, and a lot of places didn’t invest in streeteries until well into the fall. Looking ahead to 2021, more people may be willing to invest when they know they can get an entire 8 or 9-month season out of a streetery investment. And the effect would be even larger if business owners had some assurances right at the outset of 2021 that the parking spaces would never be clawed back by the city.

Council members had the good sense to get ahead of extending the new permitting rules for an additional year through the end of 2021, instead of letting them sunset at the end of 2020 as originally planned. And city staff have since quietly expanded the rules to allow parking lane space to be used by non-food businesses like gyms and retailers. But what we’ve learned from this whole episode is that, despite only a handful of exceptions, the by-right permitting system has worked incredibly well, it's reportedly not been a major source of complaints to City Councilmembers, and so there’s not a good reason to ever let the temporary rules lapse.

On the merits, the streeteries are just a better use of space than parking even outside of corona-times. They’re cheerful and enliven our commercial corridors, and they almost definitely produce more tax money per-square-foot for schools from Liquor By the Drink taxes than paid parking ever did. The simplest case for keeping the temporary rules in place is that a much lower standard of regulation has proven capable of keeping the supposed harms at bay, and there’s no reason to impose something more arduous if a lower standard will do.

When Council comes back in session next year, they should consider a longer-term scope for their very successful program, and help restaurants make decisions about their operations this spring with the benefit of a longer planning horizon.

Subscribe to our weekly newsletter for more news, analysis, and action alerts about local politics in Philadelphia and Pennsylvania.