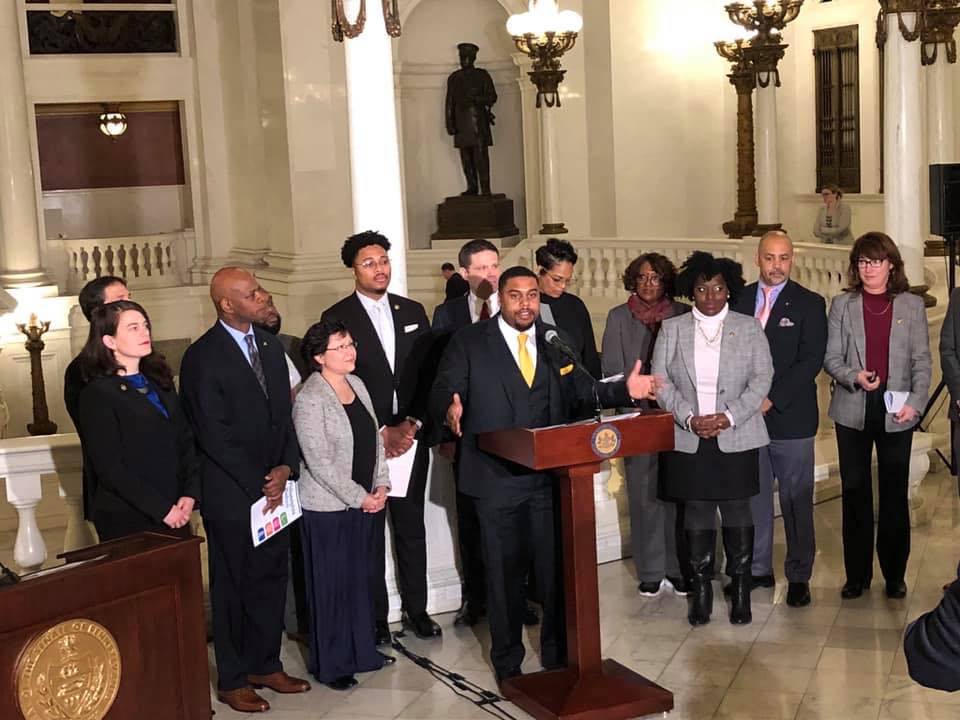 Philadelphia's delegation to the General Assembly in Harrisburg has had a lot of turnover in recent years, and there are now a majority of newer younger members in the mix who are changing the way the delegation operates for the better. Late last week we saw the latest fruits of these positive changes with the release of their Philadelphia Platform—an outline of the delegation's common priorities, anchored around the goal of reducing poverty.

Inquirer columnist John Baer caught up with some of the members to learn more about the origins of the plan and what the authors think about their chances of getting some of the proposals through a Republican legislature.

"Their platform came from more than a year’s effort by a working group started by then-freshman Rep. Jared Solomon, and including Reps. Donna Bullock, Jordan Harris, Chris Rabb and Joanna McClinton [...]

“It’s going to mean a more forward-looking, aggressive approach to the issues facing our city, the biggest being poverty and putting people to work,” says Solomon.

He adds, “It’s an accountability document. There are 23 specific policy proposals. At the end of two years, our constituents should ask, `Did they produce?’”

Dawkins says, “Our goal was to be unified for once. We’ve never been able to develop a plan from a generational standpoint that attacks poverty and joblessness at a young age and through school to adulthood … there’s a direct correlation between poor educational opportunities and poor job wages.”

This is refreshing in so many ways, most notably that they worked together at all on a proactive agenda in the first place. In contrast to prior sessions, it feels like there's finally a cohesive team effort with clear goals they're trying to accomplish.

It's also great that this isn't just a messaging exercise. Baer says the team of Reps who worked on it reviewed a lot of data and research, and existing reports and plans from city and state agencies to see what was already recommended, achievable, and would make a real difference. They also had the good political sense to peg their goals to some cross-over priorities of the Republican House majority, like workforce development, to increase the odds of passage. And lastly, they aren't shying away from asking voters to hold them accountable for getting it done either.

There's no predicting what will actually happen, but it's an encouraging sign that the new members won't be using their party's minority status in the legislature as an excuse not to bother trying to pass bills.

The workforce development section seems well thought-out, and it's especially encouraging to see some focus on adults. Too often ideas for reducing poverty focus entirely on youth education and pre-K, which are important, but don't help adults currently experiencing poverty.

And the section on commercial corridors is also a welcome addition, given the large number of these corridors in Philadelphia and the numerous positive upsides to supporting more jobs and commercial activity close to where people live in addition to the major business districts. It's really thoughtfully done, and worth quoting in full. Read the whole document here.

"In Philadelphia, a commercial corridor is the spine of the neighborhood. Its health determines and indicates the strength of the wider community; if it thrives, so too does the surrounding community, and vice versa. Corridors provide the platform for entrepreneurs to open their businesses, young people to get their first job, and residents of all backgrounds to gather and celebrate. Community, business, and government leaders have long understood this importance. That is why the City’s Commerce Department prioritizes them for investments in storefront improvements, small-business lending, and commercial corridor managers.

In fact, in 2016, the Department made $5.8 million in investments to the city’s corridors. While some of this is funded through state dollars, much of it comes from federal and city sources. Since many of these corridors are in fact state roads, the Commonwealth can do more to support these vital engines of community economic development. Right now, most of the state dollars that could be used to bolster these corridors go disproportionately (when compared with population) to other parts of the state versus the Philadelphia region. Moreover, grant and tax credit programs often reward those corridors that already have strong organizational capacity to apply for them, which are likely to be in more affluent or stable communities and rarely in neighborhoods outside the downtown.

But it is in these communities that three-quarters of all businesses and the majority of all jobs are located. And city and state leaders are going to continually rely on community leaders in these neighborhoods to implement policies to better the public realm, they need to boost these leaders’ know-how to enable equitable distribution of taxpayer resources around the city. A community-based not-for-profit organization should not have to hire a consultant to complete a state grant application. Furthermore, these corridors cannot succeed unless small businesses have access to capital to either get off the ground or expand [...]

Lastly, often the shared space along these corridors – the sidewalks, the roads – fall into disrepair or are unsafe for all users, thus holding these areas back from achieving their full potential. Many are indeed state roads. Again, those communities with the capacity and understanding to do so, target PennDOT grants to support streetscape improvements. However, planting trees, enhancing lighting, and improving safety should not be the exception, but the rule no matter the neighborhood.