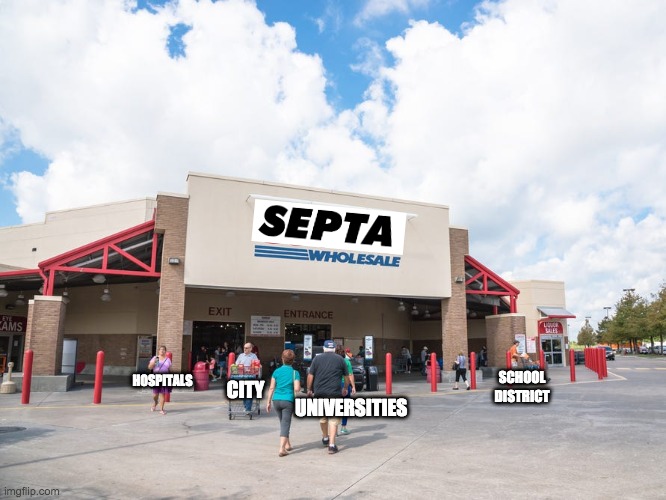 (When large institutions buy in bulk at SEPTA, everybody saves | Image: Jon Geeting)

Philadelphia has lost a lot more transit ridership over the last several decades than many of our big city peers, according to some new research from the Urban Institute.

Falling transit ridership is a big problem for all the obvious environmental reasons, but also because funding is tied to ridership, and if it keeps falling, so will our funding. It also means there’s less fare revenue coming in, which is some of the most flexible—and bondable— for SEPTA.

Writing in Governing, Jake Blumgart writes that the most significant reason for the decline has to do with the larger trend of job sprawl, which makes it a lot more difficult for transit to serve everybody's work commuting needs.

“The City of Brotherly Love has lost the most transit riders of any American metropolitan area since 1970. It is the only region that lost over 100,000 riders in that time period. The Philadelphia metropolitan area actually added 900,000 workers in that time, as many as the Boston region, where transit ridership grew by over 120,000 over the same period.

The difference is that more of Boston's new jobs, and population, have settled in the city center or one of the transit-oriented small cities — like Cambridge and Somerville — that border it.”

Reversing job sprawl and trying harder to win a larger share of the region’s jobs for dense areas like Center City and University City—whether by following Center City District’s prescriptions for regional competitiveness or something else—is no doubt the best way to reverse these transit ridership declines over time. 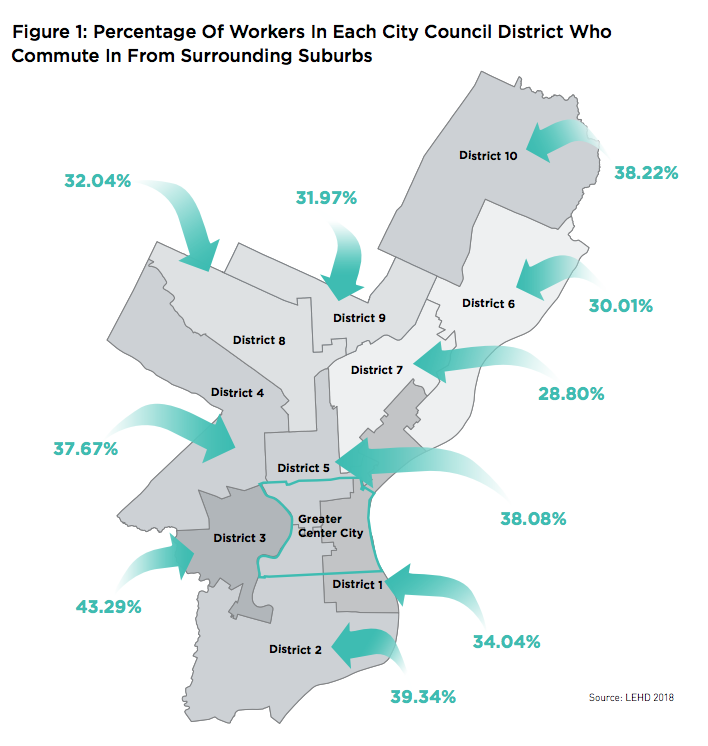 But city government only has limited influence over the job sprawl problem, and meanwhile, it’s far from the only thing city government can do to turn the transit ridership situation around.

There are a great many people living and working in Philadelphia today who don’t use transit that much now, but who would find it convenient to use more often if presented with better service and the right set of incentives.

One area where local government does have a lot of direct control over the level of transit ridership is through its own choices about things like what kinds of transportation benefits the city and school district workers get, which workers get city vehicles and parking spots, how school passes work for middle and high-school students, whether downtown employers have to administer pre-tax transportation benefits, and more.

There are a few good opportunities related to this right now that it would be a shame to pass up, particularly with the school pass situation. For the first time, students this year will be receiving their free school transit passes on SEPTA Key cards instead of the weekly paper cards, allowing for the possibility of giving students a regular Transpass. The hours will also be expanded slightly, starting at 5:30AM and going until 8:00PM now. But the passes are still only useable on weekdays, and not on weekends or during the summer.

Dan Pearson makes some great points about why expanding the days and hours of the student passes would be beneficial in his latest Inquirer column responding to the Key news. He calls on the powers that be to make the cards full Transpasses to give students more independence and economic mobility.

"My friends and I would take the Broad Street Line into Center City after school and try to score student rush tickets for the Philadelphia Orchestra. Saturdays might be spent at Temple University, which frequently hosted mock trial events. That’s without taking into account the many students who work after school and on weekends, something especially pertinent considering the nationwide surge in teen employment.

Today’s teens need this freedom just as much as my friends and I did — and a TransPass would open up the city to them in a way that might not happen otherwise. All of this was an essential part of becoming more independent and discovering ourselves. The fact that so much of the city was accessible to us via SEPTA made it all possible."

With the new Key card format, there’s no longer a technological reason why the City and School District couldn’t decide to do this, although it would require a little more local funding on top of the federal funding that covers the program costs now.

In the same vein, there’s also an opportunity to expand the number of students receiving the student passes by dealing in all the students who live within 1.5 miles of their school.

Currently, only students who live outside of that radius qualify for student transit passes, but an expansion of eligibility combined with an expansion in the pass hours to include weekends and summers could mean a lot more ridership for SEPTA, as well as a new stable local funding source. Expanding the passes to more people would also be a net revenue raiser for SEPTA because they also make some money from administering the school passes.

The other opportunity coming up has to do with the new contracts being negotiated this fall for the city’s public sector unions. A city administration that wanted to treat falling transit ridership as a serious problem could try and make a difference by including “free” transit passes in all municipal workers’ benefits under the new contracts.

Making transit benefits universal for city and school district workers by having the city government buy bulk passes for everybody from SEPTA at a discount would be likely to increase transit ridership by making transit the “free" default option for more people.

Would every single city worker necessarily choose to use the free transit benefit to get to work everyday? No. But should the city still put a paid-for transit pass in the hands of every worker whether they ask for it or not? Yes. It’s a nice effective raise for city workers if they can save on transit, or avoid the costs of having to drive to work. And who knows when it might come in handy on the weekends, or to get to a sporting event or any number of other activities outside of work?

And more importantly, from SEPTA’s standpoint, it’s not necessarily a bad thing if the city ends up paying for some passes that rarely get used. What matters is that the city government can get a better deal on transit passes by buying them at a bulk rate than workers can get buying them individually, and that this would be a very stable, bondable new source of local revenue for SEPTA.

It would be smart for SEPTA to use this moment of rebuilding from its current low ridership to begin to try and introduce this kind of institutional pass model more widely at large institutions in its service areas like universities, health systems, large employers, and city government.

The City doesn’t control every single lever you’d need to rebuild transit ridership and service in Philadelphia, but they do have a lot of direct influence through their position as a large employer, and it's time for the administration to start thinking more about how these decisions about benefits—whether for city workers or middle and high school students—can be another venue for making progress toward the Mayor's political commitments on economic opportunity, climate mitigation and transportation.