Mayor Kenney's Police HQ2 Deal is Even Worse Than You Think 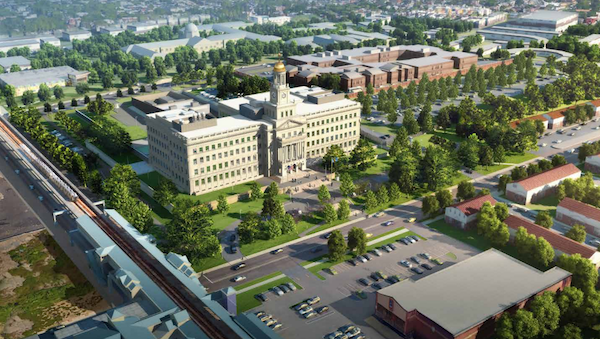 The Provident Mutual Building saga continues with Jacob Adelman reporting that the Kenney administration is moving forward with a plan to sell the noted white elephant and surrounding 13-acre property near 46th and Market for just $10 million, after taxpayers recently invested about $50 million into renovating the building for a new police headquarters. They're going to lose $42 million, which sounds bad, until you realize it's even worse than that.

The recent history of the project is that back around 2010 when the Barnes Museum moved to the Parkway, the City moved the Youth Study Center from the Parkway to a site in West Philly next door to the 13-acre Provident Mutual property, and PIDC acquired that site too from the Urban Education Development Research and Retreat Center.

PIDC commissioned a study of some different potential uses, and determined that it would be a good fit for redevelopment as a new Police Department headquarters, as the police had outgrown the outdated Roundhouse building. The Nutter administration signed onto the plan around 2014 and began rehabilitation work, investing about $50 million into the building, mostly to stabilize the roof and install new windows.

Mayor Kenney was elected in 2015, the exterior work was completed, but then the city curiously began dragging its feet on the planned interior work. David Gambacorta then reported in May 2016 that the Kenney administration was considering scrapping the Police headquarters plan, in response to "grumbling" from the police.

"You might recall that former Mayor Michael Nutter’s administration spent several years mapping out an elaborate plan to move the department’s headquarters to the grand Provident Mutual Insurance Building at 46th and Market streets in West Philadelphia.

A ground-breaking ceremony for the $250 million project was held in 2014; the 13-acre plot was slated to be renamed the Public Safety Services Campus, and house the Department of Public Health and the Medical Examiner’s Office. City Councilwoman Jannie Blackwell introduced two bills to secure funding for the project, which was expected to be finished in 2018. And last fall, plans for a $675,000 public art installation were announced [...]

"Many cops privately grumbled over the planned move to 46th and Market. The department’s current headquarters — the unloved concrete slab known as the Roundhouse — has plenty of drawbacks, like frequent flea infestations. But its location at 7th and Race is close to the Criminal Justice Center, the FBI and the U.S. Attorney’s Office, places that detectives and top brass have to regularly visit.

Housing the M.E.’s Office, the Health Department and the Police Department on the same West Philly campus would bring a surge of activity to the surrounding neighborhood, which could be a good thing. But the practicality and high cost is clearly a concern for Kenney’s team."

Spokesman Mike Dunn said Mayor Kenney wanted to make "a responsible choice for taxpayers" but then amazingly, the new Mayor allowed the police to reject that location mid-renovation, and began talking about moving police headquarters to the old Inquirer building at 400 N. Broad instead. The building was available because developer Bart Blatstein was positioning it as one of the possible new casino locations, but his proposal was not selected by the state.

The newspapers’ former offices would allow cops to remain close to all of those offices and the courts, as well as the highway. “The building on North Broad Street is available and vacant.  It is large enough to do a bunch of things,” Kenney told WHYY reporter Tom MacDonald and other reporters earlier today. “You could move police headquarters in there.  A couple of districts in Center City could move in there. We’d free up developable space in Center City, which is lucrative.”

The arguments for the Inquirer building aren't bad on the merits, but the administration had already invested $40 million in the West Philly location and didn't have another plan for what to do with the Provident Mutual Building.

Later, Kenney made the call to move the police headquarters to the Inquirer building, and was about to get kind of a bad deal on it until Councilman Allan Domb, a real estate expert, stepped in to renegotiate with Blatstein and saved the city about $10 million. It was later announced that a deal was in the works to sell the Provident Mutual building to the developer Iron Stone to create a new campus for behavioral health and community services, with tenants including CHOP, the YMCA, Penn, and PHMC that would cost around $70 million to build out.

Kenney has insisted that the city would "break even" on the deal, by bizarrely trying to count proceeds from the sale of the Roundhouse toward the sunk costs from abandoning the Provident Mutual headquarters plan. Tom MacDonald quoted Kenney saying it would break even as recently as August 2018:

“To say they were selling other properties to make up for the loss, that doesn’t make any sense,” Domb said.  Proceeds from “selling those properties should go to the new police headquarters, not the one that was a failure.”

Fast forward five months, and the Philadelphia Tribune is reporting the City will not break even, and will actually lose $42 million selling the 13-acre Provident Mutual property for just $10 million, if the vote to sell the property goes as planned later this week.

What's more, the City also has to pay debt service on the bond that was issued to finance the project, to the tune of $4 million a year, for the next 20 years, putting the total loss at closer to $100 million.

The real loss is even worse than that though since it's not only the difference between the roughly $50 million spent renovating Provident Mutual, and the $10 million the City will recover from the sale, but also the difference in what it will cost to build out 400 N Broad for the police headquarters, as opposed to if they had stuck with the West Philly site.

As we pointed out previously, there's also money being left on the table due to a confusing bonding issue that kept the large surface parking lots on the 13-acre campus—a big section of the land area—out of contention RFP for redeveloping the site. The administration's inability to sort out the legal problems there and make that land developable as part of the package lowered the sale value of the site.

And finally, Councilmember Jannie Blackwell's failure to complete passage of the Transit-Oriented Development zoning overlay she introduced—which would have increased development rights on the site, and therefore its sale value—prior to the start of the bidding was another careless and avoidable error that could have reduced the tens of millions of dollars in lost revenue from the Mayor's political cave to the police.

One other point worth pulling out from the Tribune article is that the 4601 Market property is assessed at over $100 million, which may ultimately say more about the Office of Property Assessment's unreliable land valuation method than the scale of the losses, although the square footage land value isn't drastically out of scale with other square footage land assessments around that area. This, obviously, should raise a lot of skepticism about whether the Kenney administration has positioned city taxpayers for the best possible deal, and the wisdom of rushing toward a vote on a sale before the end of this Council session.