Philly's New Voting Machines Can Finally Randomize Ballot Position. Let's End the 'Ballot Lottery' Once and For All 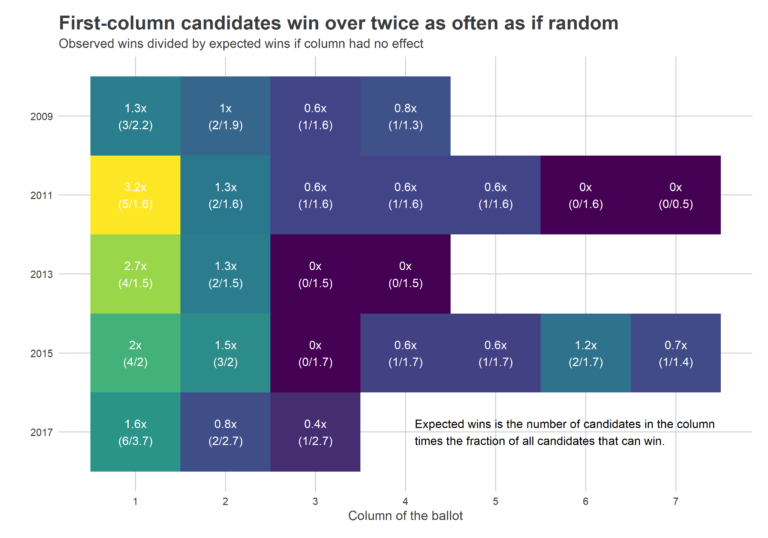 Philadelphia’s judicial elections are a lot like a lottery system, where a candidate’s randomly-selected ballot position tends to be the most influential factor in the race. Sixty-Six Wards writer Jonathan Tannen, in a 2016 analysis for Econsult, found that candidates who draw the top left-most ballot position can triple their vote total as a result of their lucky draw.

This calls for the obligatory aside that this is obviously a terrible way to hire people for such an important job as a judge, and the state should outlaw judicial elections and move us to a different type of selection system. But for now, it’s the system we have, and there are ways to make it less like a lottery that election officials ought to look into.

This week, candidates who filed to get on the ballot this spring partook in the annual tradition of selecting a ping pong ball from out of a Horn and Hardart coffee can to determine their ballot position. That, to date, has been the best we could do to remove any unfair intentionality from the ballot order, but what happens next is that it locks in a statistical advantage for a few people by placing them in the most advantageous spots to be in on every single ballot across the city.

Randomizing the candidate order on each voter’s ballot has been tossed around as a possible solution, but until Philadelphia ordered new voting machines recently, it was only really theoretical. Now, the new machines have the technological capability to actually run an election like this, along with other more sophisticated voting systems like instant-runoff ranked-choice voting.

Northwest Philadelphia Rep. Chris Rabb sees the opportunity to remove this unfair advantage from the system, and has introduced a bill in Harrisburg for the second time requiring that voting machines randomize ballot positions in primaries. 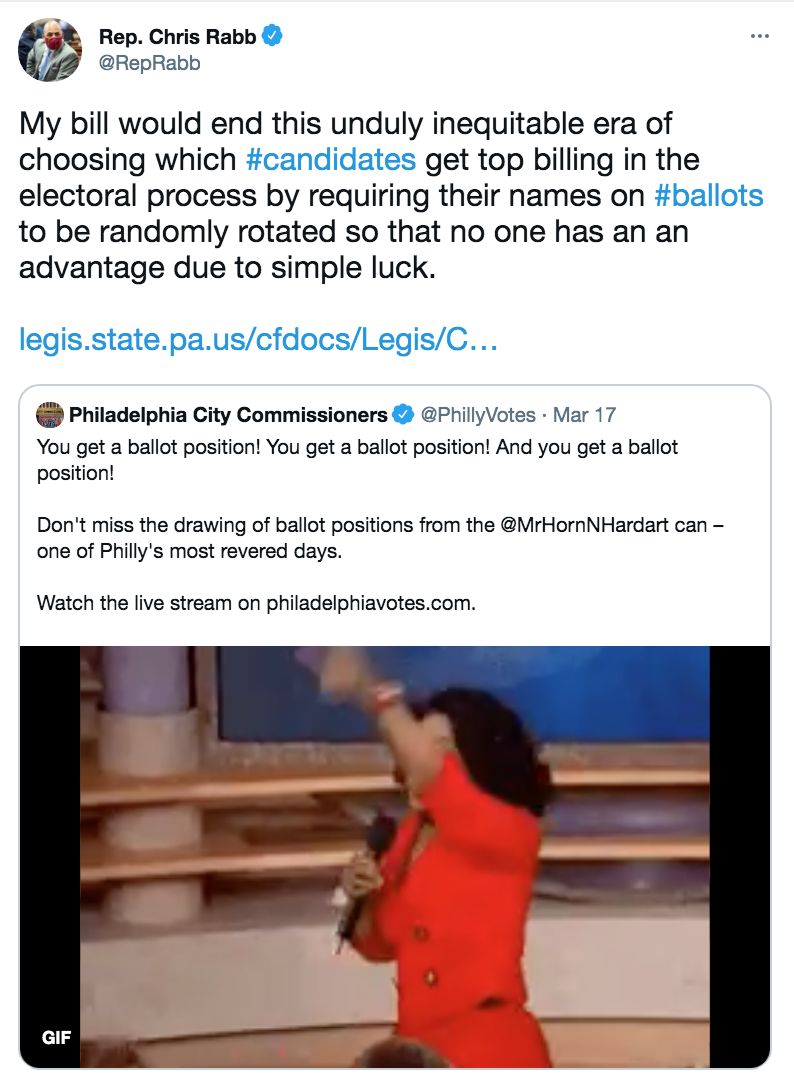 There are different possible versions of how this could work, with some potentially doable under existing state and local law, and some requiring authorizing legislation. One of the hiccups that would need to be resolved concerns the requirement that participants draw “lots”–which to date has been interpreted to mean the actual ballot position, but could potentially be interpreted differently in a way that would be compatible with a lot more variation in the order between different wards or divisions, even if not randomization exactly.

It’s important not to let the perfect be the enemy of the good when thinking about how to implement this.

While maybe ideal in theory, randomizing the candidate order for every individual voter’s ballot likely isn’t possible. Another 2019 post from Tannen looked at a few different ways we might pursue randomization, and estimated that even just scrambling the order differently for each of the 66 wards would eliminate about three-quarters of the ballot position effect on voting outcomes. Maybe one day we could do even better than that, but a three-quarter reduction in the ballot lottery effect would be a massive win and would be very much worth pursuing.

One new challenge for this idea is Pennsylvania’s new vote-by-mail system, where anything approaching true randomization would require some new software capable of randomizing what is printed on the paper ballots, which already have to contain very specific information down to the precinct level. This is yet another reason why the relatively simpler objective of ballot randomization by ward could be a good near-term goal, while working toward even more fine-grained randomization in the medium-term.

Some operational compromises will always be necessary, but some type of randomization scheme is definitely possible to implement if the political will exists to do it. The recent technology upgrades and policy changes expanding vote-by-mail in Pennsylvania have opened up another frontier in the fight for expanded democracy and voting access, which is the imperative to continually keep expanding our laws and policies to take advantage of all that is now technologically possible to do, rather than accepting the policy constraints imposed by past technologies.