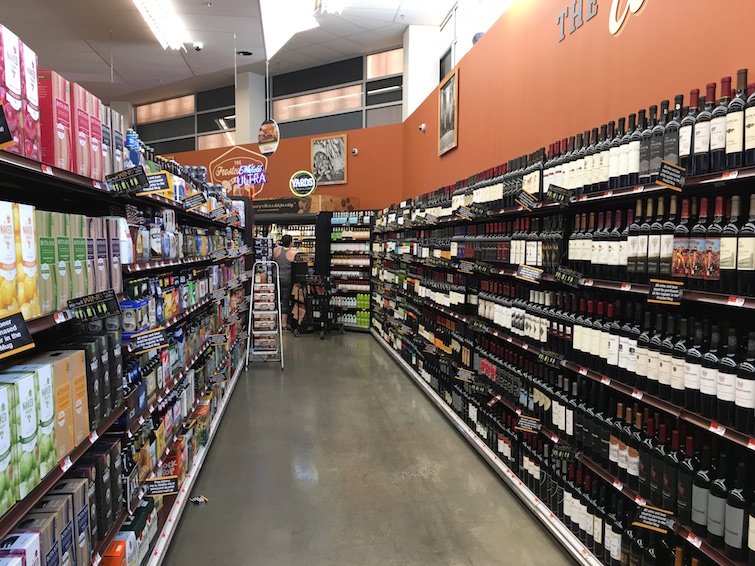 Writing at Billy Penn this week, wine expert Jason Malumed reported that the LCB dipped into its reserves to pay half of its annual contribution to the state budget this year, and if nothing changes significantly, they’ll be fully broke by 2019. The problem, he says, is that Act 39—a package of wonky tweaks to the liquor code that the state legislature passed last year—was projected to raise $139 million more in tax revenue from expanded alcohol sales which has mostly failed to materialize.

But since the legislature still budgeted the revenue of $213 million, the LCB still had to hand it over to the General Fund, which meant taking $112 million from their reserves. For context, LCB’s entire contribution to the general fund last year was just $100 million. (They also remitted about $484 million in state liquor and sales taxes.)

Clearly, the LCB needs to start raising some more revenue, soon. Luckily for us, there’s a solution to this, and some of the other problems created by Act 39 and exacerbated by recent case law: printing some more liquor licenses.

As the federal government was repealing Prohibition in 1933, Pennsylvania Governor Gifford Pinchot—a Prohibition supporter—set out to create an alcohol distribution system for the Commonwealth that would make purchasing alcohol “as inconvenient and expensive as possible.”

Pinchot succeeded, and though there have been small adjustments to elements of Pennsylvania alcohol policy over the years, his basic framework is still in place. That includes the state system of Wine and Spirits stores everyone knows about, the state wholesale system that the state stores buy from, and a tangle of regulations governing who can sell which kinds of alcohol, and in what quantities.

The state store system gets all the political attention, probably because it’s the most visible to everyone, but arguably the most economically damaging and under-appreciated aspect of this framework is the County Quota system governing liquor licensing. Pennsylvania caps the number of liquor licenses for bars and restaurants (called R licenses) at 1 per 3,000 people per county. There are other types of licenses too, but this is the most common.

This cap has always made liquor licenses an expensive purchase in PA, particularly in the suburban counties where low population density makes licenses scarcer than they are in Philadelphia. Currently, most new restaurants don’t even buy their licenses from the state, but from other license holders, in an auction, often after a restaurant shuts down—which means usually, the state doesn’t even make money on the transaction. The licenses started to become even scarcer—and a whole lot more expensive—after 2010, when the Pennsylvania Supreme Court decided that a Western PA Wegman’s counted as a restaurant because they have a seating area, and thus were eligible to bid on an R license to sell beer.

Now any grocery or convenience store with a seating area, a separate entrance to the beer area and separate cash register, and a kitchen is eligible to bid on R licenses to sell six-packs and poured beer on-site. And Act 39 made R licenses even more valuable by allowing anyone selling six-packs to also sell wine.

This is why we’re seeing so many grocery stores throughout Philadelphia installing seemingly-random seating and check-out areas they don’t really need: it’s to get in on the six-pack action.

The problem is that for every new supermarket that gets to sell six-packs, one less bar or restaurant can open. The cap on liquor licenses means that supermarket chains like Acme or Whole Food, who are backed by deep-pocketed investors (Amazon, maybe!), are able to outbid everyone for restaurant licenses, leaving fewer, but drastically more expensive, licenses available for everyone else.

As a result, the price of a liquor license in Philly has exploded, from around $55,000 in 2005 to almost $200,000 today. (License prices nearly doubled in the last year alone.) Outside of Philly, licenses are even more scarce. They routinely go for $200-300,000 in the suburban counties, and a license auction in Cumberland County recently set a statewide record, with Giant submitting a winning bid of $556,000.

State lawmakers realized when they passed Act 39 that license prices would increase, so they increased the supply somewhat by reinstating some expired licenses, or “zombie licenses” as they’ve been called in the media. But with the first tranche of 126 zombie licenses going for $277,382 on average earlier this summer, it’s already clear that this small number of zombie licenses won’t be enough to tame the inflation problem the legislature has created.

Expensive licenses are bad for the restaurant economy

Just like how movie theaters will mark up popcorn and soda in order to cross-subsidize movie tickets, restaurants use alcohol to cross-subsidize the food. At least, that’s what they do everywhere else, but in Pennsylvania we force most food businesses to subsist on low margins from food. It would be better for the restaurant economy, and for the economic stability of the people who work in restaurants, if more food businesses had access to this superior business model.

While inflated liquor license prices may be good for incumbent license holders, both as an asset and a barrier to entry, they’re bad for the hospitality economy overall, because they’re going to make it harder for first-time entrepreneurs to open new restaurants. That’s a big deal in Philly, where the leisure and hospitality industry has been the city’s leading growth industry over the last decade. Hospitality is also one of the few industries where people without a 4-year college degree have a real shot at upward mobility. It’s not unheard-of for people to start out as dishwashers, learn some cooking skills, and eventually open their own establishments. But high start-up costs break that career ladder.

And citywide, we’re likely going to see more licenses migrating away from commercial corridors on the city’s edges toward greater Center City, where it makes sense to open a super-fancy restaurant that’s worth financing a $200,000 license.

Turn on the printer

There are a few different ways we might approach a solution to this problem, but they all essentially boil down to one thing: printing and auctioning off more licenses with the explicit goal of deflating the prices. This will allow the state to generate more funds for the LCB’s budget, and open the door again for smaller independent restaurateurs.

The state’s zombie license offset was a gesture in this direction, but it didn’t go far enough. In fact, they’re explicitly auctioning off the zombie licenses in small batches over a long period of time so as not to drive down the value of existing licenses. Rather, they should actually strive for lower prices as a matter of policy.

The first thing the state legislature could do is take the national supermarket chains out of competition with regular bars and restaurants by creating a new class of ‘G’ grocery license that is distinct from the R license for restaurants and bars. Supermarket chains are always going to be able to pay as much as they have to for these licenses, so we need to take them out of competition with the small independent operators.

To start righting the ship at LCB, grocery stores should be able to buy G licenses directly from the state for a fee, with no cap on the total number. What’s the right price for a grocery license? $10,000? $25,000? That’s for lawmakers to decide. But the LCB needs some cash, and there’s not a great reason for the state to limit its own money-printing capabilities in this situation.

In addition, the state could create new, cheaper licenses for each type of alcohol sold. There’s already precedent for this in the liquor code with ‘E’ licenses that allow beer sales only; and a few years ago, Rep. Dan Moul (R-Adams County) introduced a bill that would have created a new unlimited class of wine-only license that would allow people to open wine bars that don’t sell beer or liquor. You can imagine these less-appealing licenses allowing for more low-fi corner bars, while fancier full-service bars and restaurants that want to sell beer, wine, and liquor continue to labor under the County Quota system.

The trouble for any proposal to solve the license inflation problem is that it will run into a buzzsaw of opposition from incumbent license holder interests, like the PA Tavern Association. The people who recently paid $300,000 or $400,000 for a license aren’t going to be pleased with an agenda of deliberately deflating those prices to a more reasonable $40,000 or $50,000 just so that small independent businesses can continue to have an on-ramp into the hospitality economy. From their perspective, that barrier to entry is a feature, not a bug.

But the imperative to keep Pennsylvania’s high-growth hospitality economy dynamic and inclusive should outweigh that kind of base rent-seeking as a political priority for any public-spirited elected official, and with license prices spiraling out of control, there is an urgency to act quickly.