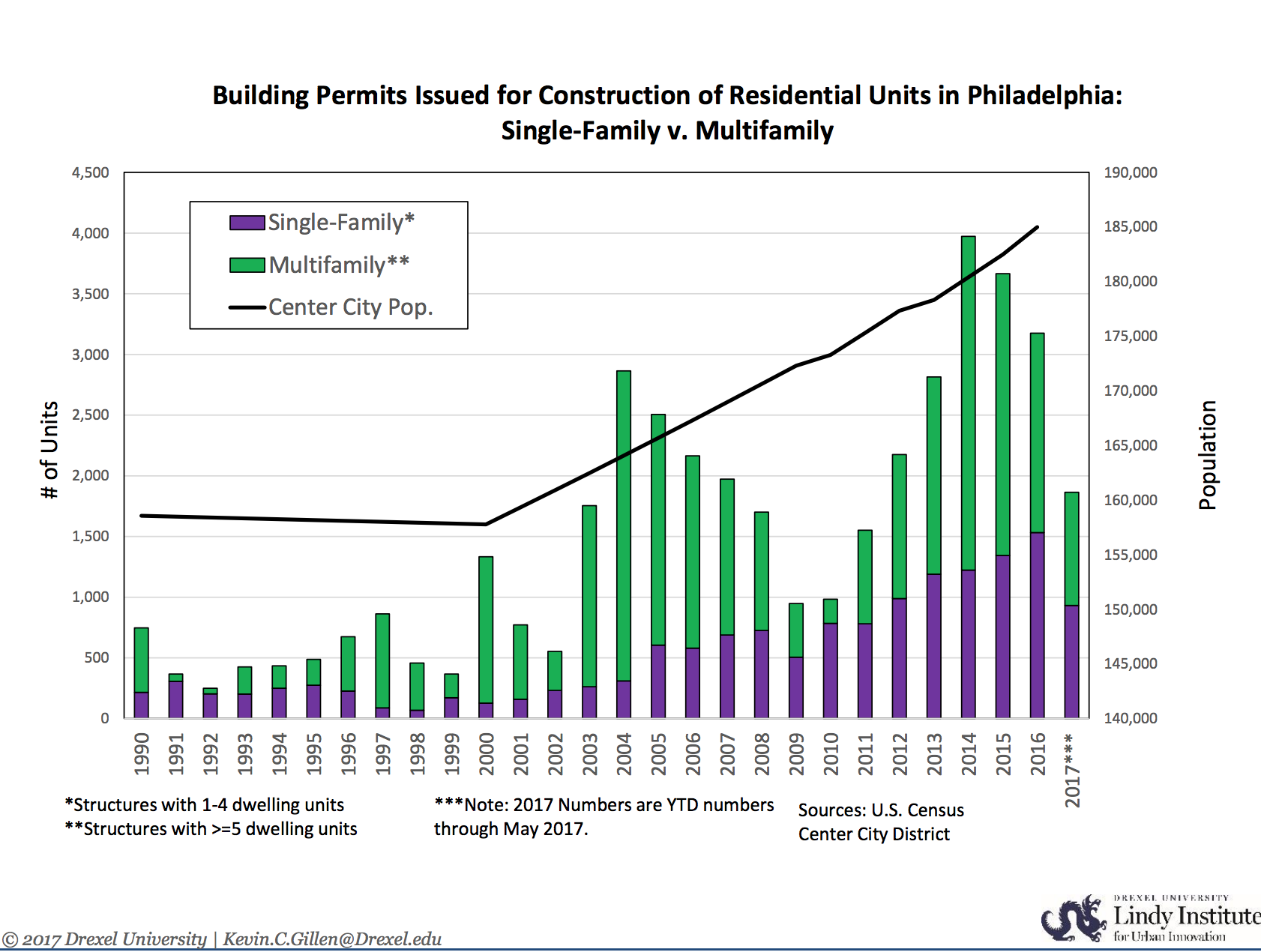 Bobby Allyn at WHYY says the rental market is finally softening after years of extremely tight occupancy, at least at the very high end of the market, and landlords are finding themselves in the unfamiliar position of offering enticements to prospective renters.

With the city in the midst of an apartment construction boom, renters have more options than ever, meaning landlords are increasingly dropping rents and sweetening the pot to woo tenants.

“Two years ago, we’d do a Craigslist post, and we’d get 20 hits instantly,” said longtime Philadelphia real estate broker Mike McCann. “Now, I just had one, a little one-bedroom on Ninth and Spruce for $1,100. We had no hits in a week.” [...]

With a glut of new units, competition is brutal and rents are softening. According to Zillow, median rents in Philadelphia are down for the first time in seven years.

Anecdotally, the numbers are bearing out across the city.

Some observers have been itching to call the top of the rental market since as far back as 2014, but the "over-supply" fears have so far failed to materialize for the boring reason that developers have been building about as many new units as are warranted by population growth.

We've been building a lot, but the number of people has been increasing by about the same amount, leaving the vacancy rate unchanged—and very tight at around 2-3% vacancy—until just the last few quarters when we got into the 5-6% vacancy range.

The basic housing story of the post-recession period is that Philly's population continued to grow during the recession, but developers didn't build as many units then because financial markets were extraordinarily risk-averse and less willing to lend. The supply of rental housing became very tight, and then once financial markets increased lending again, we had a few years of V-shaped growth as builders moved to fill the pent-up demand. The supply of housing units only overshot population growth in one of those years, in 2014.

Now we're at around 5-6% rental vacancy in Center City, and while nobody really seems to have any good data on this, it's likely that vacancy rates are still tighter in outer neighborhoods where there's been much less multifamily construction.

About 3.4 percent of apartments in Boston-Cambridge-Newton were empty in 2015, according to data published by the United States Census Bureau. Bluestone, also a professor of the political economy at Northeastern University, argues that a healthy percentage is double that – between 6 and 7 percent. Rents will continue to rise under this vacancy rate, Bluestone said, but it will climb “no faster than normal inflation, which is by 2 – 3 percent each year.” [...]

“The vacancy rate is the critical index of what will happen to rent and prices,” Bluestone said. “Landlords can raise their rents in a market where you have extremely low vacancy rates, and that’s what we’ve seen happen in Boston.”

Rather than a "renter's market" as the WHYY headline suggests, Center City is really more of a neutral market right now that should still support rent growth at about the rate of inflation. It would probably take a few quarters of 7-10% vacancy to really start to see a drop in the price level, as opposed to just the slow growth we're seeing now.

Further bolstering this point is an infographic released today by JLL showing that absorption and prices remain steady despite the large number of units coming on the market. 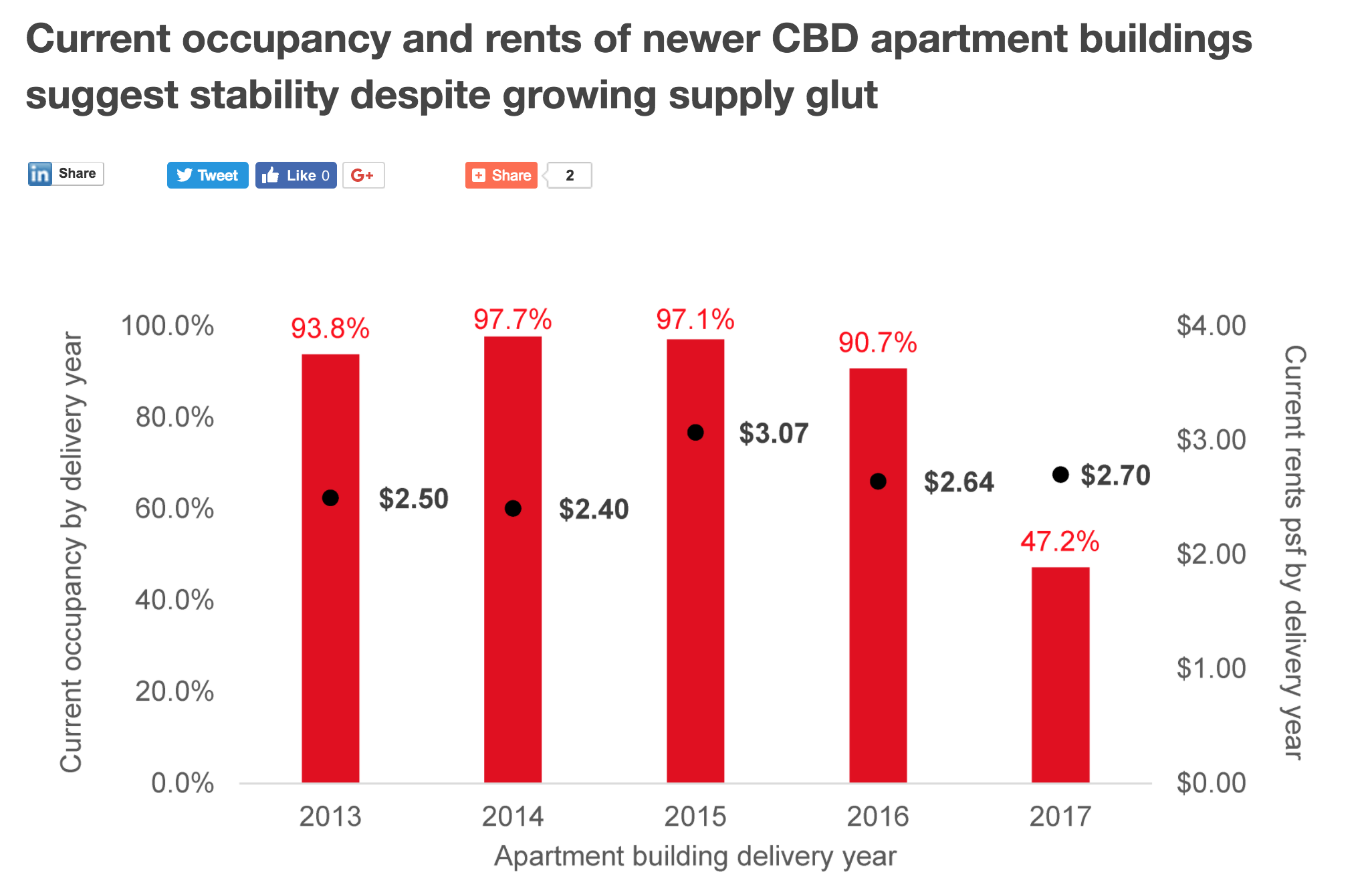 "Pricing at the 2017 deliveries remains above the five-year average despite the slow absorption. While growing supply will lower asking rents and increase concessions for the time being, steady employment growth in recent years indicates that Philadelphia can fill these units, though it will take longer without an uptick in the job creation rate."

The narrative around this issue matters because there's a lot of attention to affordability issues right now, and the multifamily market trends show that those of us advocating for more liberal multifamily zoning as a means of keeping prices in check have a point.

Most people renting housing in Philly don't receive any kind of public subsidy, and never will, and they pay the market price. City policy currently has nothing to offer this group, and even the overzealous inclusionary zoning bill in Council right now would offer no benefit to the vast majority of these folks.

Zoning is the main policy lever we have to impact the price of market-rate housing, though politicians generally don't think about it in these terms. But they should, because the more multi-family housing we permit by-right, and the more land coverage for multi-family zoning that there is, the longer the rental market is going to stay in this 6-7% sweet spot where landlords don't have the market power to demand huge spikes in rent.