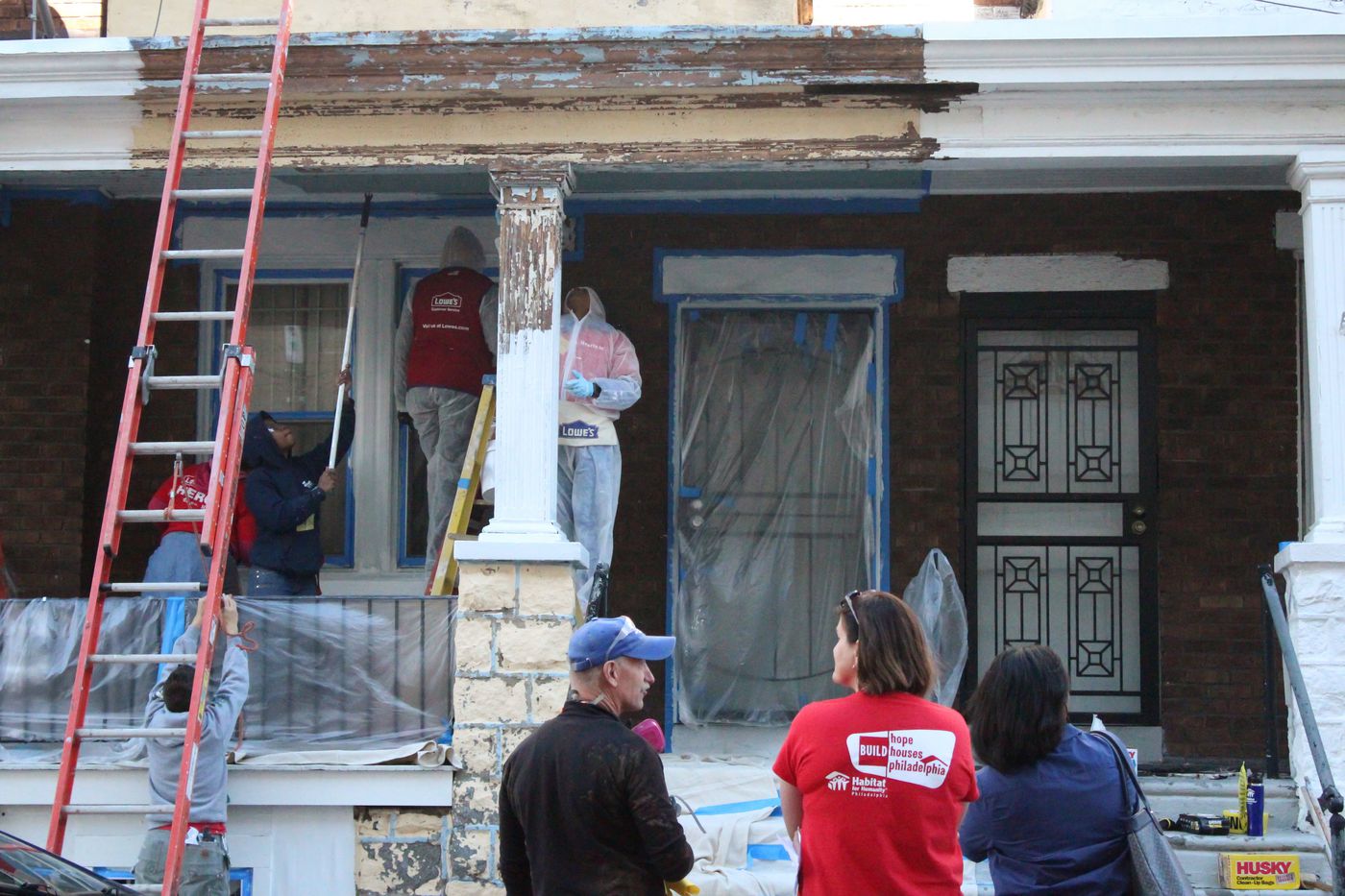 The study uses a difference-in-diffence analysis to examine the relationship between grants awarded to low-income homeowners under Philadelphia’s Basic Systems Repair Program (BSRP) and crime statistics..

​​The BSRP, which is funded out of the city’s Housing Trust Fund, makes grants of up to $20 000 for eligible low-income homeowners for structural repairs to electrical, plumbing, heating, and roofing. Eligible homeowners must meet income guidelines, which are set by the US Department of Housing and Urban Development and vary from year to year.

The stand-out finding from their analysis is that home repairs funded by Philadelphia’s Basic Systems Repair Program (BSRP) are associated with a 21.9% reduction in total crime, and that the greater the number of homes receiving BSRP grants on a block, the more pronounced the crime reduction benefits were. Notably, when they break it down by types of crimes, the 21.9% reduction also holds for homicides specifically—something local elected officials are very attuned to at the moment, for good reason.

This study found that the BSRP intervention was associated with a modest but significant reduction in crime. These findings suggest that intentional and targeted financial investment in structural, scalable, and sustainable place-based interventions in neighborhoods that are still experiencing the lasting consequences of structural racism and segregation is a vital step toward achieving health equity.”

As the authors note, this builds on other evidence finding that place-based interventions like vacant lot trash removal and other cleaning initiatives, or even increases in tree canopy coverage, can have significant crime reduction benefits. This is the first study to look at the connection between the city’s main home repair program and crime statistics, and while it’s not surprising there would be a connection, the size of the effect is impressive and should prompt some rethinking of the city’s funding priorities.

The researchers posit some reasons for the possible causal link (though stop short of asserting causality) including reductions in financial stress and increased social cohesion. In line with this theory, Tacony CDC director Alex Balloon pointed out on Twitter that if 5 households on a block are using BSRP, it's likely because news about the program spread by word of mouth, suggesting more social cohesion on those blocks. He noted that in his experience with the city's Storefront Improvement Program, these kinds of improvements can set off a virtuous cycle of more privately-funded improvements happening too. 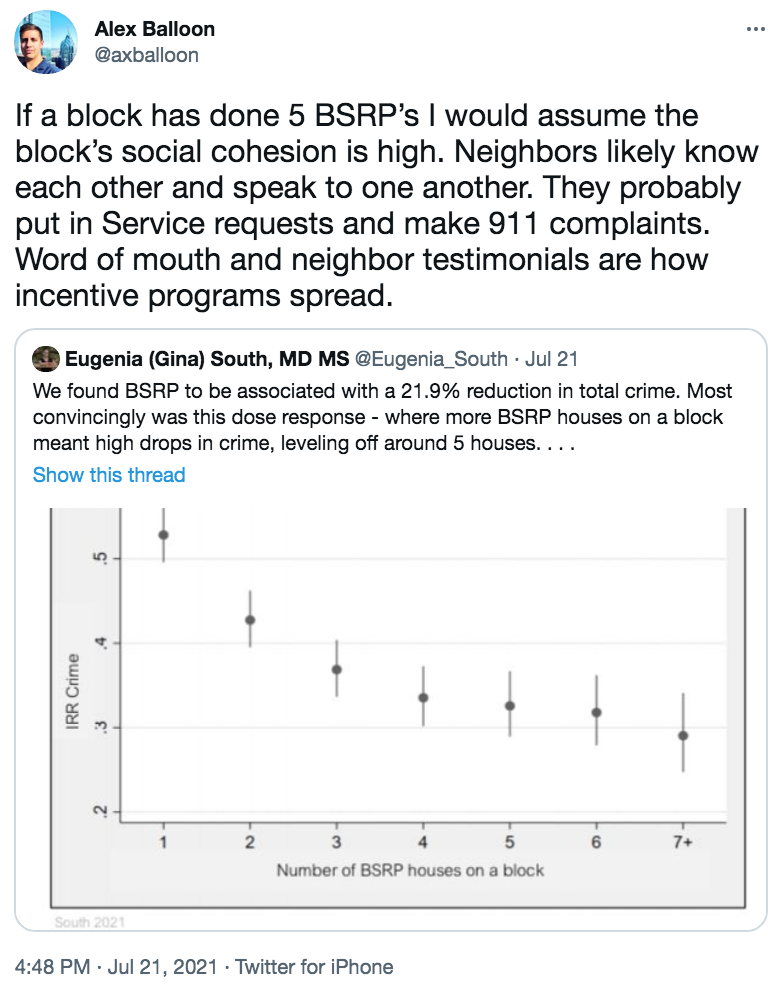 One observation to make is that this all goes hand-in-glove politically with the recent emphasis on non-punitive approaches to crime reduction. District Attorney Larry Krasner’s easy reelection shows there’s an appetite for this in the electorate, but concerns about crime are still very high among the voters, and the city so far hasn’t done a good job of bringing crime down in reality.

Elected officials led by Councilmember Jamie Gauthier have been calling on Mayor Kenney to make a gun violence emergency declaration, and this week Councilmember Gauthier joined with Controller Rebecca Rhynhart in releasing a plan with more targeted strategies to reduce gun violence in the 14 zip codes where most of the shootings have been concentrated this year. The problem is much, much bigger than some more housing funding can solve, but what the research does suggest is that more Basic Systems Repair funding could complement the other kinds of targeted place-based strategies Gauthier and Rhynhart are thinking of.

Another key point this raises is that the Planning Commission and City Councilmembers should try to be less blasé about the impact of different policy choices on the level of Housing Trust Fund funding.

The best new source of Housing Trust Fund funding that City Council has come up with in the last few years is the Mixed-Income Housing Program, where builders can get some zoning relief to build somewhat taller and denser buildings in exchange for payments into the Housing Trust Fund. That program is on track to raise over $20 million for the Housing Trust Fund since it took effect in 2019—quite a bit more than the roughly $3.6 million a year that Council projected at the beginning.

Zoning relief costs the city nothing to provide in terms of public funds, as the additional development rights are created out of thin air, and exchanged for money that goes into the Fund.

Unfortunately, a recent bill authored by Mayor Kenney’s Planning Commission, and introduced by Councilmembers Maria Quinones-Sanchez and Jamie Gauthier, would make the Housing Trust Fund payment option much less usable, and raise less money in favor of getting more on-site below-market units in private developments. The bill was held at the end of the last City Council session for further changes, but because it already passed out of the Rules Committee, the Department of Licenses and Inspections is currently enforcing it as though it had passed, under the "pending ordinance" rule.

Free money for the Housing Trust Fund, which can be appropriated to the Basic Systems Repair Program, is a pretty valuable thing on its own, and it’s even more valuable with the new and better understanding of how it impacts crime reduction, with this issue being near the top of the public's agenda at the moment.

In making the case for caring less about how much money the Mixed-Income Housing program brings in, Planning director Anne Fadullon and others have resorted to making a lame argument about the inability of the city to technically dedicate any funding to the Housing Trust Fund. The argument is that since the city is not allowed to establish dedicated funding sources for specific budget priorities under the Charter, technically these in-lieu payments under the Mixed-Income Housing program are really just payments to the city's general fund, which the Kenney administration can spend however they want.

This is basically the same argument that the opponents of the soda tax were making about that revenue stream—that because it's all general fund revenue, you can't be 100% sure it'll be directed solely to Pre-K or Rebuild programs. The Kenney administration was very vocally pushing back on this idea in that particular instance, but when it comes to the dedicated-ness of the Mixed-Income Housing payments, they’re taking the opposite position.

Rather than arguing they'll continue to be untrustworthy with the in-lieu fee money, the Kenney administration should make a public commitment to start doing what City Council intended when they wrote the law.

While Councilmember Derek Green’s idea for a city Charter amendment to guarantee a minimum amount of funding for the Housing Trust Fund is a good start—although apparently is opposed by Mayor Kenney—setting a higher floor still doesn’t absolve the administration or City Council from each doing their part to make the density bonus system produce more money for Basic Systems Repair and other HTF programs. The Green amendment would set a decent floor, but the City still wouldn't be flush with cash for everything they want to do on affordable housing funding, so it still matters whether the other funding sources perform well or not.

On the Council side, that should mean leaving in place the in-lieu fee payment option for smaller apartment projects and “Missing Middle” housing types, and turning the gaze more more toward larger multi-family projects as the better supplier of more on-site below-market units. By all means, hike the in-lieu fee if it seems too low, but the bigger problem is that the legislation bans smaller projects from making the in-lieu fee payments at all, and these are the ones that really need more flexibility.

Council can also rezone more private land for the few zoning categories that are allowed to use the Mixed-Income Housing program—a point that Councilmember Helen Gym has echoed on a few occasions, but hasn't yet introduced legislation that would do this. At the very least, Council should stop downzoning land in the most obvious locations for larger MIH projects, like on commercial corridors and near public transit.

On the administration side, Mayor Kenney should commit to honoring the logic of the Mixed-Income Housing program by appropriating exactly as much in-lieu fee money as it raises, and not raiding the funding for other priorities. City Council is right to be skeptical after not seeing the full funding amount allocated to the HTF last year, but the better solution is to fight for that commitment from the Kenney administration, not to kill the golden goose prematurely.

For the cost of one below-market apartment in a new building, the Housing Trust Fund could instead collect equivalent funding to provide 15-20 more Basic Systems Repair grants for low-income homeowners that help keep people in their homes, improve people's living conditions, and reduce crime and homicides by a non-trivial amount—all paid for it with free money from builders. There's no comparison in terms of the number of people who would be helped, and this new research offers some even more compelling reasons to prefer having the Basic Systems Repair funding.