Ten Out of Ten District Council Members Have Challengers in 2019

Philadelphia is coming off of two unusually competitive and high-turnout election cycles in 2017 and 2018, in the wake of Donald Trump's surprise 2016 victory, and while we're still too far from Election Day to know whether 2019 will fit the pattern, early signs point to another lively change election. Case in point: ten out of ten District Council members are facing a primary challenge.

The period to circulate nominating petitions begins next Tuesday, so in about a month we'll know for sure who will be on the ballot, but in the meantime, the most authoritative source on the current candidate pool is the Board of Ethics's running list of who's filed.

Here's who's filed with the city to run for District Council seats so far as of February 14th: 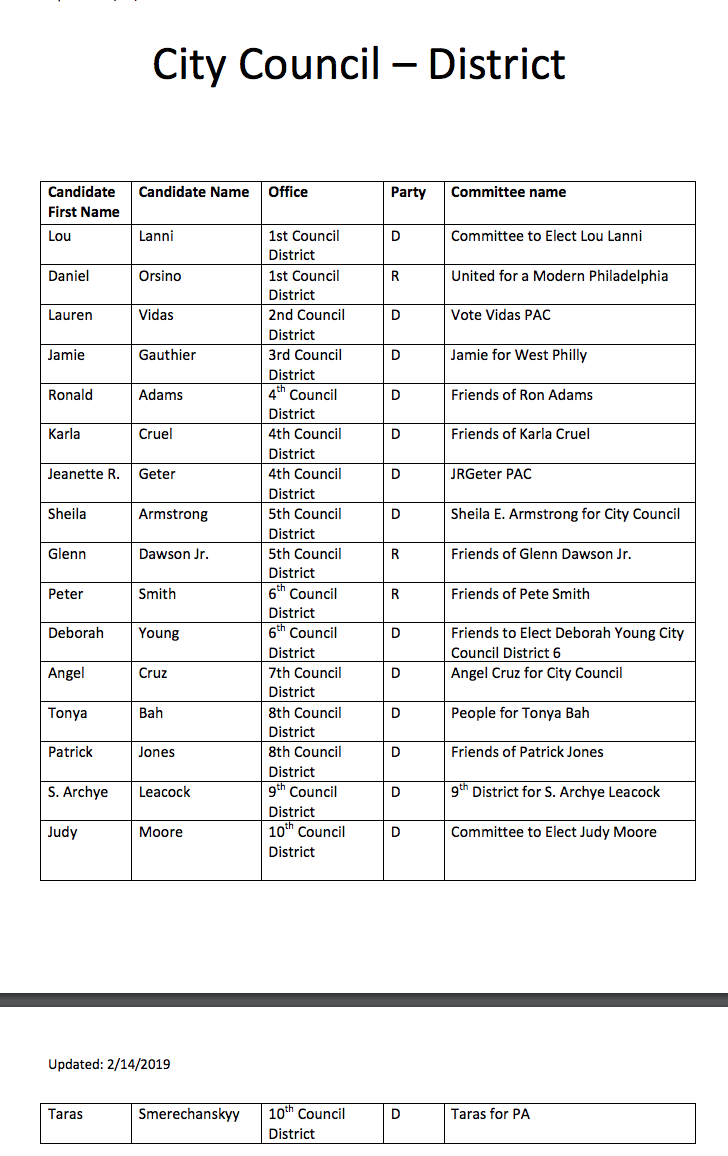 Some of these people are starting out with more name recognition or resources or other advantages than others, but what's surprising is the high percentage who could plausibly run a real race. In contrast with prior cycles, where it was really only the 7th and 8th Districts seeing any competition, this year there isn't one incumbent who can afford to take their reelection for granted.

On the At-Large side, there are as of now 21 Democrats, 7 Republicans, and 2 independents vying for 7 Council seats, according to this document, and only one of those is an incumbent (Helen Gym.) Derek Green recently announced he would run for reelection, and Allan Domb is also expected to file again.

There are also competitive downballot races for Sheriff, with Rochelle Bilal and Malika Rahman challenging confirmed sexual harasser Jewell Williams, and a 9-way Democratic primary to replace chronic no-show City Commissioner Anthony Clark, who, rather unsatisfyingly, is retiring at the end of his term.

So far there are also 44 judicial candidates either confirmed or rumored to be running this year, according to the Philly Judges site.

As we've said in the past in the case of the 2018 ward elections, the antidote to the despair over federal politics is to get more involved in these local races, where even a few hours of volunteering or a small donation to a candidate you support can really make an outsized difference in the elections this May 21st.

With petitions starting this Tuesday, it's a great time to reach out to one of the campaigns you're interested in and help collect signatures to get them on the ballot. And if there's anyone in particular you're interested in connecting with, send us an email at [email protected], and there's a good chance we can help.