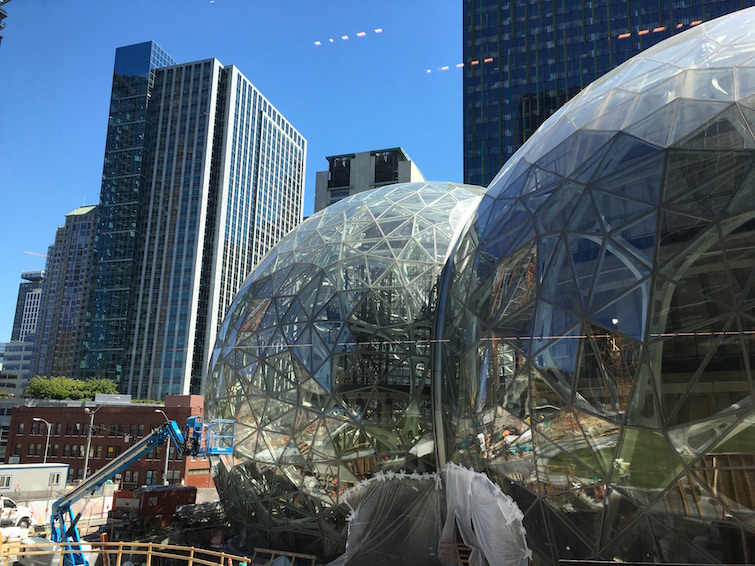 Two weeks ago, the City submitted its bid (two days early!) and now the waiting game begins. Smart money is on Amazon announcing a shortlist and letting those sites battle it out. In the meantime, here are ten quick thoughts on the bid, the shortlist, and what this all means for Philadelphia.

1. When will Amazon announce the shortlist?

All we know is that Amazon is announcing the HQ2 winner in 2018. But presuming they want to vet the finalists—the City is already planning for potential visits by Amazon execs—they’ll get the shortlist announcement out soon. In all likelihood, they’ll announce the shortlist in the first quarter of 2018 and let the finalists bid against themselves and each other through the summer. Then they’ll announce the winner in the fall of next year.

Odds that they announce the shortlist with an ad during the Super Bowl? Better than zero.

2. What will the shortlist tell us?

No one has any idea who will make the shortlist, but odds-makers have Philadelphia squarely in the running. Making the shortlist is like making the playoffs; once you’re in, anything can happen… except if it’s already a done deal (see: Boston, Austin).

3. What if there are other real cities on the shortlist?

New York: If New York’s on the list, it demonstrates that the notoriously cheap tech giant has decided that talent is a bigger factor than cost. That basically rules out Philly, and also puts real pressure on Seattle. Seattle is already hearing that Amazon isn’t looking for an HQ2, but a future HQ1, in response to an inhospitable political climate, a shortage of high-skill workers, and a difficulty getting transplants to stay in the city for more than a couple of years. Like everyone else considering a move, if Amazon decides they have to be in New York City, it’s only a matter of time until they end up in New York City.

Washington, DC: Same as above, plus the Washington Post and Jeff Bezos’s house.

4. What if there are kinda cities on the shortlist?

Atlanta: If Amazon lands in Atlanta, it suggests their priority was checking the most boxes while prioritizing an extant corporate culture and the cost of doing business. Atlanta has a huge metro, the country’s busiest airport, and cheap construction. It’s also home to twelve Fortune 500 companies, including Home Depot, UPS, Coca Cola, and Delta Airlines. By way of a comparison, Philly’s got three, soon to be two, which is as many as there are in Akron.

Charlotte: If Amazon ends up in Charlotte it means they were always looking to build a suburban corporate campus in a business-friendly southern state. Nothing to see here but low taxes, streamlined bureaucracy, and a place that passes for a city if you’re from the suburbs.

Somewhere in Texas: Easy to see why they’d end up in Austin: Whole Foods, a monster tech economy, and a nearly limitless potential for sprawl. Dallas and Houston are also in the running, owning to their own robust IT ecosystems and the general Texas-ness of the business tax structure. The logic with all three is the same as with Charlotte. If it’s Austin or Houston, it might spell the end of Amazon in Seattle. And if it's Austin, it was probably always going to be Austin.

5. What if there are non-cities on the shortlist?

The Research Triangle: If the Triangle makes the list, it’s clear Amazon prioritized talent/ease/cost over urbanism/transit/access. The two-million-person metro at the intersection of Raleigh, Durham, and Chapel Hill doesn’t have an urban core or real transit to speak of, but is an exceedingly easy place to live and run a company. If Amazon includes any suburban options on the shortlist, it becomes much more difficult for locations with more complex (read: challenging) bureaucracies to shine through. Cheaper and warmer is a tough combo to beat.

Northern Virginia: Same as above, with proximity to DC as an added value.

Our level of disappointment should be filtered through the cities that make the cut. If it’s all Sunbelt and/or the suburbs, we never stood a chance. If Chicago’s on the list, that hurts. Boston and DC would be nearly as aggravating. Philadelphia is a unicorn bid: we’re the only affordable major city on the east coast with a real urban fabric. If that’s what they want, there’s only one option. But they could be looking for something completely different.

7. Will it be University City or the Navy Yard?

University City, without a doubt. As we’ve argued before, University City is the best site in the country, and nowhere else tops the constellation of advantages offered by Schuylkill Yards. The Navy Yard, on the other hand, is our version of the Research Triangle. If a suburban-style corporate campus is what Amazon wants, they’re going to a place in the south that does that better/cheaper/faster than we do.

8. How much of a role will incentives play?

The assumption is that Amazon will Thunderdome the finalists and ride with the site that offers the richest incentive package. Almost no one has publicized their incentive packages, but Chris Christie gonna Chris Christie, and he’s on the record saying that New Jersey is in for $7B. A huge number, but New Jersey’s taxes are outrageously high. States with lower tax burdens can offer much less by way of incentives and still be the better deal, a combo might be appealing to a company that doesn’t want to look like they’re getting unfairly beneficial treatment.

9. What states are the biggest players?

Only three states can lay claim to multiple contenders: Texas, North Carolina, and Pennsylvania. If there’s one finalist from each of those three states, it’s going to be hard for Pennsylvania to play. And say what you will about Texas and North Carolina, but people want to live there. Texas is the second fastest growing state in the US, behind only El Paso-sized North Dakota, and North Carolina’s twelfth. Pennsylvania is bringing up the rear in 42nd place, with half-percent growth between 2010 and 2016. And from an outsider’s perspective, the likelihood of hateful legislation coming out of Harrisburg is roughly the same as Austin and Raleigh. See also: presidential election results, 2016.

This is, of course, an impossible question to answer, as the process is and will continue to be a total black box. But we can speculate about the highest-level questions. Do they want to stand out or blend in? Do they want to take a risk or make the easy choice? Do they want to tell a story or slip into an existing narrative? If it's the former, Philadelphia has as good a shot as anyone; if it's the latter, we’ve got no chance. More than any other city, our bid is all-or-nothing. We’ll know more in a few months.