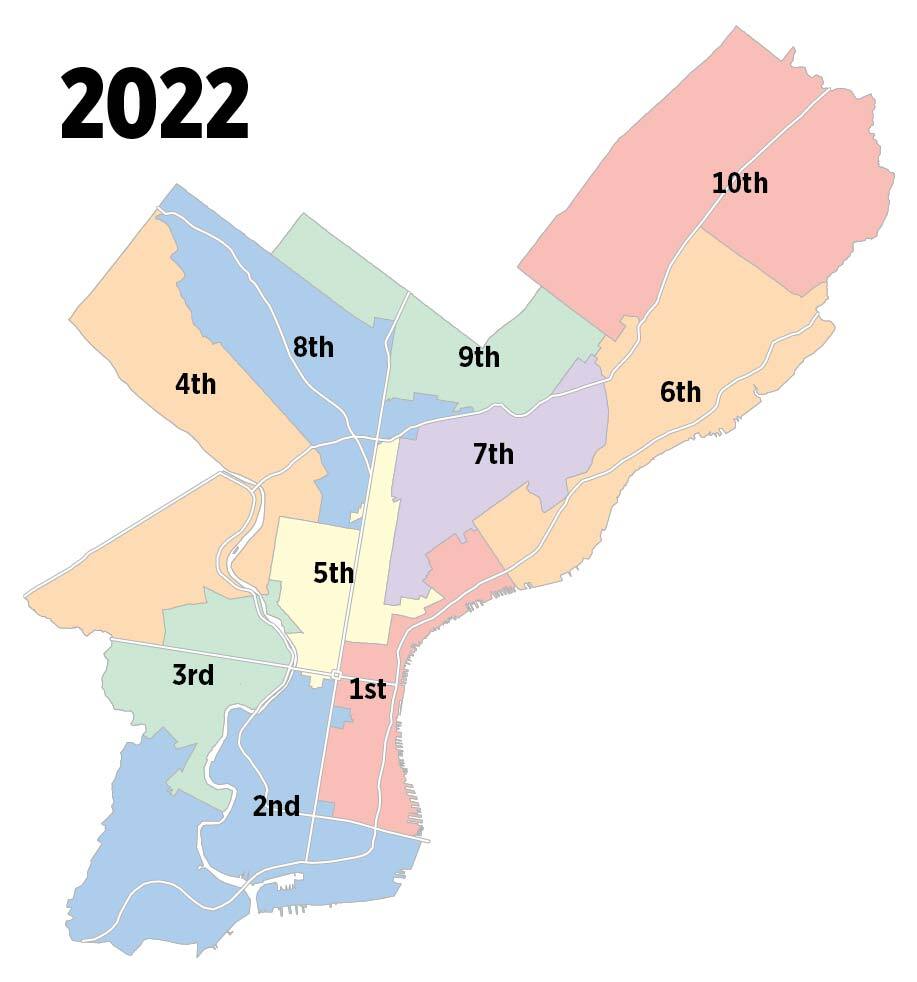 Philadelphia City Council will host their one and only meeting to take public comment on their proposed new City Council District map on Wednesday, January 26th between 10am and 1pm, and residents interested in testifying about it will have to sign up by 3pm today (Tuesday).

To testify at the meeting, email Chris Goy at [email protected] or call 215-821-6625. When you call, you’ll give the following information:

Speakers who submit the above information by 3pm today will be called during the public hearing and invited to the remote hearing. They will be given additional instructions by the Committee Chair when they're connected.

Under the City Charter, Council is only legally required to host one public meeting about the new map, and that can be the same meeting where the map is officially voted on, making the whole exercise very pro forma.

Indeed, if Council doesn’t pass a map by February 12th, the Charter says the members will stop being paid until they do. So there is some real pressure to get something done fast, even though according to news accounts, several members had not seen the proposed map until it was released to the general public last Thursday. The map appears to have been drawn entirely within the Council President’s office, with little input from the other members, some of whom are allegedly pretty angry about the way their new districts were drawn.

Because the map doesn’t entirely have Council buy-in, and because of some other sloppy choices that may have put CP Clarke’s map in violation of the “one person, one vote” principle, it’s possible some meaningful changes could still be made to the map on Wednesday before Council votes on it.

Those revisions could even happen during the meeting, and that’s why it’s so important for people who care about the outcome here to sign up to testify today before 3pm, and make sure to get that feedback on the record while the situation is still in flux.

So what substantive changes would happen under the proposed map?

The Inquirer created some side-by-sides of the 2011 and 2022 maps for comparison. As reporter Sean Collins Walsh points out, the district shapes are overall very similar, but there are a few important changes, and some of the choices could put the map on the wrong side of voting rights law if someone decides to bring a challenge. 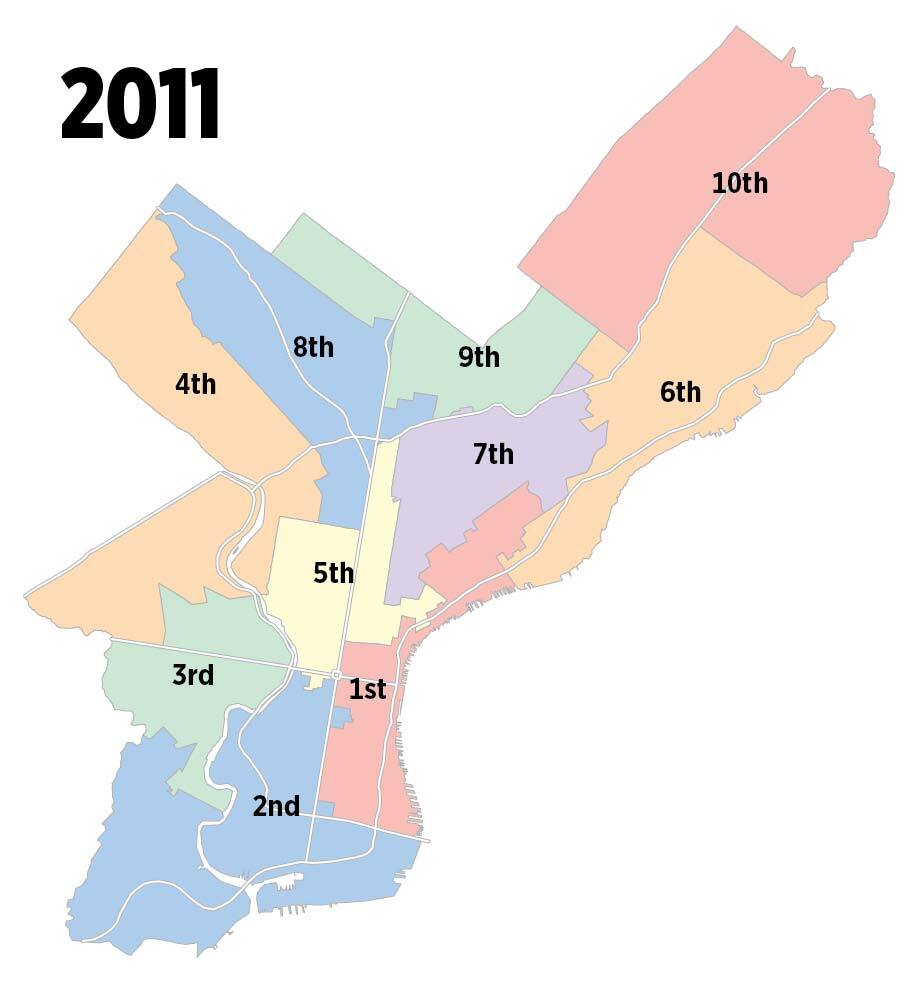 “​​The U.S. Supreme Court has ruled that, except in special circumstances, the population of the least and most populous districts in a redrawn electoral map must be within 10 percentage points of each other.

Under Clarke’s proposal, Councilmember Curtis Jones Jr.’s 4th District, which stretches across the Schuylkill from Overbrook to Roxborough, would be 10.2 percentage points smaller than the Lower Northeast Philadelphia-based 6th District, which Bobby Henon represented until he resigned on Thursday following his conviction on federal corruption charges [...]

​​The exceptionally small population of the 4th District and other choices made in the redistricting proposal confounded many who analyzed the map Thursday and Friday.

Clarke’s proposal, for instance, adds a small part of Brewerytown in North Philadelphia to Councilmember Jamie Gauthier’s West Philadelphia-based 3rd District, which previously did not cross the Schuylkill. That sliver of Brewerytown borders Jones’ territory, and would not have to cross the river to be included in his underpopulated district.”

The proposed map also includes some odd changes breaking up communities of interest in growing areas of the city, like the Riverwards neighborhoods and Fishtown in particular, which appear to serve more of a political purpose.

In the Fishtown section of the 18th Ward, one ward is split into 3 different City Council districts within a 0.1-mile span, right in the middle of the neighborhood. 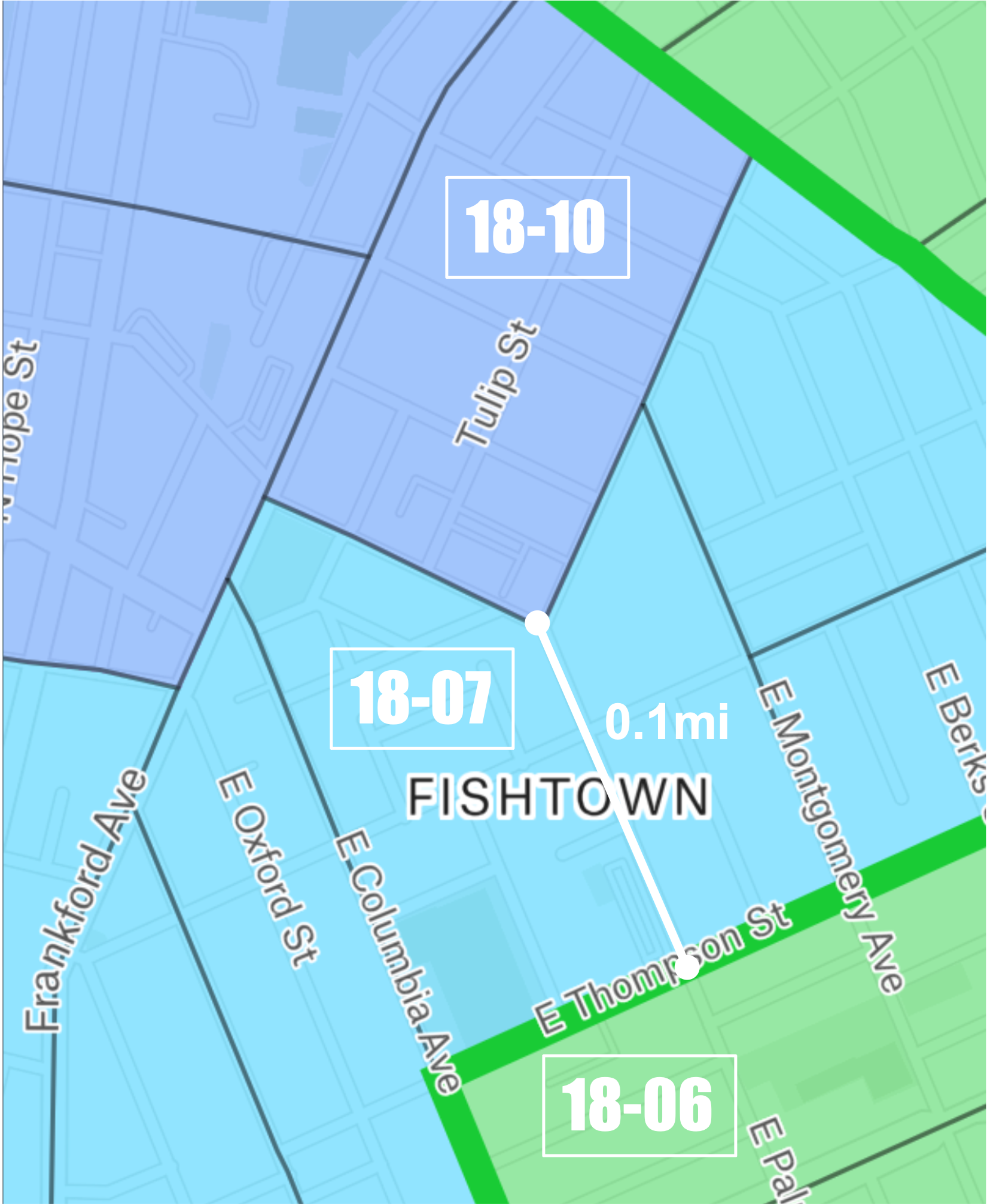 Council President Darrell Clarke needs to have division 18-01 remain in the 5th Council District for residency reasons, but achieving this doesn’t require cracking Fishtown to such an extreme extent.

Without breaking any divisions, it’s possible to put the Council District boundary more cleanly along Frankford Avenue while keeping 18-01 in the 5th District. Here’s a good example of how that would look from an otherwise-very-similar citizen-drawn map made with Azavea’s DistrictBuilder tool, which manages to achieve fewer ward splits than the CP Clarke map.

But cracking a growing area of the city can also have other political advantages for incumbent self-preservation, and that more likely explains the decision to break up the neighborhood even more than it already was under the 2011 map. It’s especially important that residents in places with 3-way splits make it to the meeting to testify on Wednesday.

Azavea’s Daniel McGlone on Twitter pointed out some other three-District ward splits that have the effect of cracking the vote of other growing areas of the city too, like the 42nd Ward, a majority Hispanic ward covering parts of Feltonville and Olney, and the 54th Ward, where neighborhoods with fast-growing Asian immigrant populations would also see their vote split between three different Council districts. 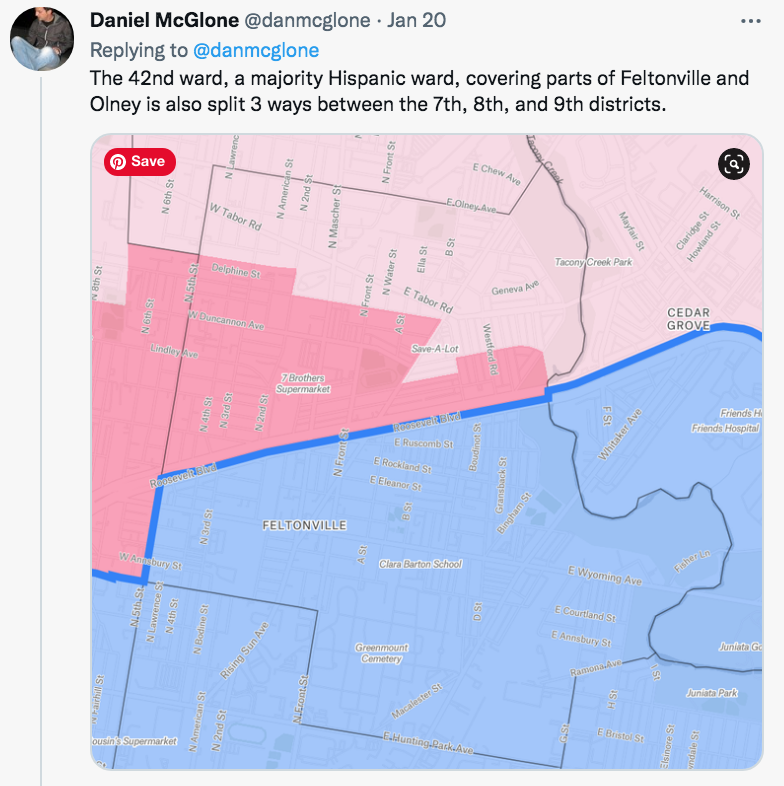 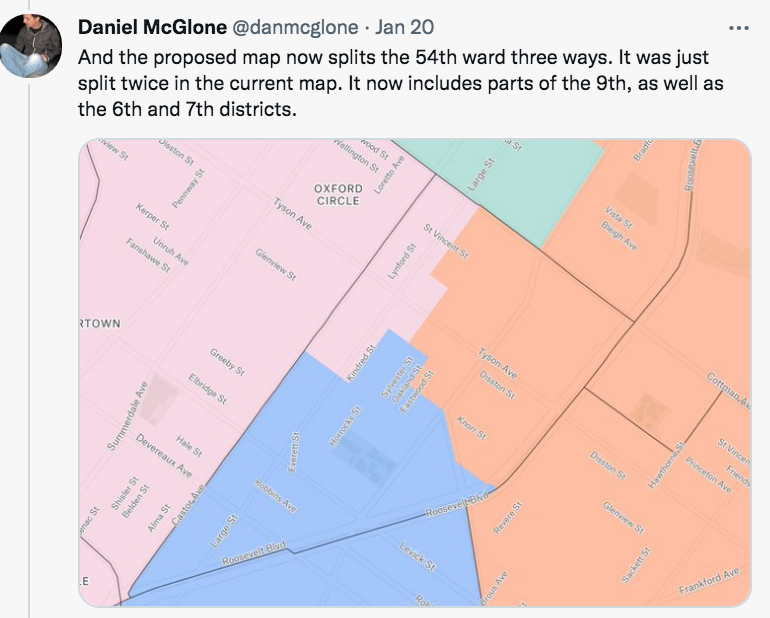 The bottom line is that it’s possible to draw fair, legally acceptable districts that avoid splitting neighborhoods and wards and other communities of interest, and city residents should sign up to help deliver that message to City Council at the hearing tomorrow (Wednesday) from 10am-1pm.