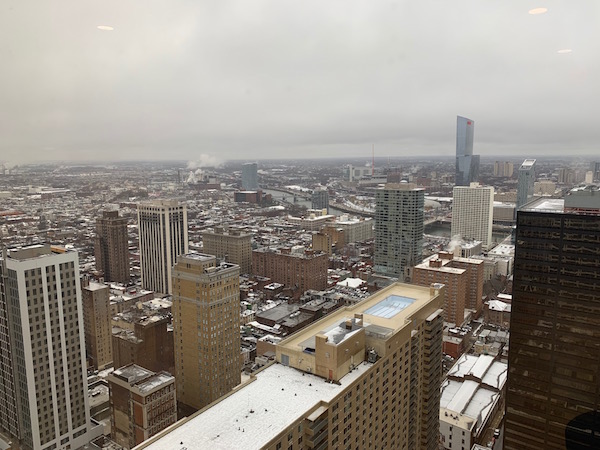 Philadelphia has been seeing a lot of new residential high-rise construction since the mid-2000's, but we haven't had as much new commercial office tower construction despite reasonably strong downtown job growth. Why is that the case? Glenn Blumenfeld has an interesting op-ed looking at some of the math behind it, and why we're unlikely to see an office tower boom in the near future.

Blumenfeld writes that the pending sale of BNY Mellon Center for about $350 a square foot—much higher than the $125 a square foot that trophy buildings here used to fetch not too long ago—is historically high for Philadelphia. And with prices like that, you might think we'd be seeing even more new office buildings proposed. But because that's about half the cost of what it takes to develop a brand new building, it's more economical to buy existing ones. Blumenfeld says no one has made any money selling a new office building in Center City in over three decades!

Today, given historically high construction costs, a trophy tower costs about $600-$650-per-square-foot to develop. Thus, even as it sets a new sales price record, BNY Mellon will trade at only about 54 percent of replacement cost. And that, in a nutshell, explains why no one (other than Comcast) has been building new office towers in Philadelphia outside of tax advantaged zones. In fact, except for Comcast Tower and Bell Atlantic Tower (which was really a sale/leaseback), no one has made money selling a new office building in Center City in over 30 years. Why build a new trophy tower when you can buy an existing one for half the price?

The underlying issue is that while trophy office rents are at a recent high, they're not yet high enough to make building a new one worth the investment, except under certain circumstances. Trophy tower rents right now are in the mid-to-high 30's per square foot, but they need to be in the 50-60 range to start hitting the "replacement cost rents" needed to make new construction attractive.

Why should we care about any of this? As Center City District's Paul Levy likes to point out, the office districts in Center City and University City combined hold 53% of all jobs in the city and employ people from all across the skills and education spectrum, not just professionals. So while you'll sometimes hear political rhetoric pitting Center City against "the neighborhoods" the reality is that more job growth in Center City is a net benefit for neighborhoods, because lots of people have jobs downtown but live in other places. It's the most opportunity-rich area of the city.

Blumenfeld points out that companies in Boston, Chicago, Washington, D.C., and New York City are all paying rents in the $60-80 range, which is why you see more new office buildings going up in those cities. On the one hand, it's good that Philadelphia is a relative bargain compared to those cities. On the other hand, there's a bit of a chicken and egg problem where a preponderance of older, dingier office inventory and a lack of available Class A office space makes it less attractive to locate here.

Those are the fundamentals, but there are cases where that logic doesn't hold, and Blumenfeld cites the last Philadelphia office tower boom in the late 80's and early 90's as an example of a situation where some high-rises were built even though rents were below replacement costs. But the factors driving that—a much larger quality gap, larger law firms driving status competition, and a less stringent lending environment—are absent today.

As for what could set off the next office construction boom, Blumenfeld suggests that a new large employer requiring more than 200,000 square feet of space might do the trick, or perhaps it would come from increased interest in development opportunities in office building-friendly locations in the new Opportunity Zones like University City, the Navy Yard and North Broad Street.

According to BLS statistics, the unemployment rate in Philadelphia is the lowest it's been since 2000, currently standing at 4.9%, and the number of employed Philadelphians is the highest it's been since they started recording in 1990. It's far from a rosy picture for everyone, of course, but there is an underreported good news story on jobs that's been playing out the last few years, and before long, we're going to start seeing the impact of that on the Philadelphia skyline.