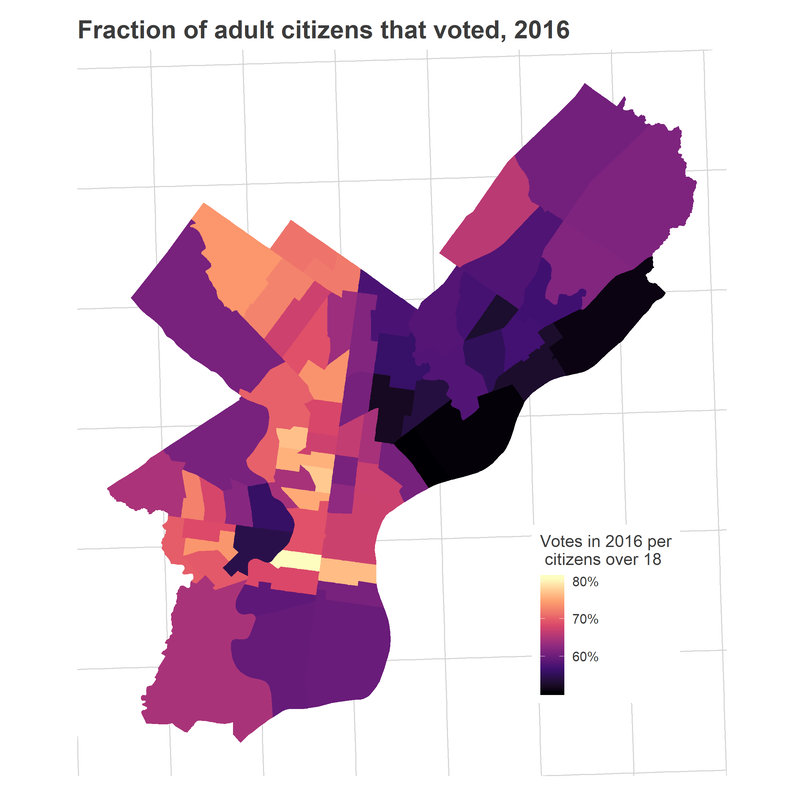 Philadelphia saw record midterm election turnout this November, with 53% of registered voters participating in the election. This is the way we're all used to thinking about turnout—as a percentage of those registered—but Jonathan Tannen's latest post at Sixty-Six Wards provides some interesting alternative ways of conceptualizing it as a fraction of all adults of eligible voting age—arguably a more useful way for wards and other political actors to think about it.

Thinking about it this way, strategies to increase "turnout" would be different depending on whether a neighborhood or ward is lagging in any of these particular areas. "If a ward has a low proportion of citizens that are registered," he writes, "registration drives make sense. If a neighborhood has very low turnout in midterms vs presidential elections, then awareness and motivation is what matters."

So in the 2018 elections, 53% of registered voters turned out, but only 46% of eligible adult U.S. citizens over the age of 18. Here's a map from Tannen breaking it down by ward:

Tannen dives much deeper into all the different layers of this question in the post, so read the whole thing if this is of interest, but there's one more map worth pulling out that gets at the problem with measuring turnout as a fraction of registered voters.

Because Philadelphia doesn't purge our voter rolls all the time and kick people off the rolls when they don't vote for a few election cycles (generally a good policy) there are a lot of places with big overages. In some places its even led to a ridiculous-sounding situation where the percentage of citizens registered to vote is over 100%. That's actually the case in 22 wards!

While people tend to use facts like this to suggest conspiracy theories, Philadelphia's ratio is actually quite typical for the state, across wealthy and poor, Republican and Democratic counties. [See below!]

And it's very (very) important to point out that this is good for democracy: being too aggressive in removing voters means disenfranchising people who haven't moved. And we have no evidence that anybody who has moved is actually *voting*, just that their name remains in the database.

This makes it difficult to accurately describe voter turnout as a percentage of registered voters who came out to vote, since the places with over 100% of citizens registered are always going to come out looking bad, even if the true number of residents votes at a rate that's relatively in step with the rest of the city.

Read the rest of the post for more insights on the interplay between registration, population, and turnout dynamics, and why this matters.