The Urban Exodus That Wasn't 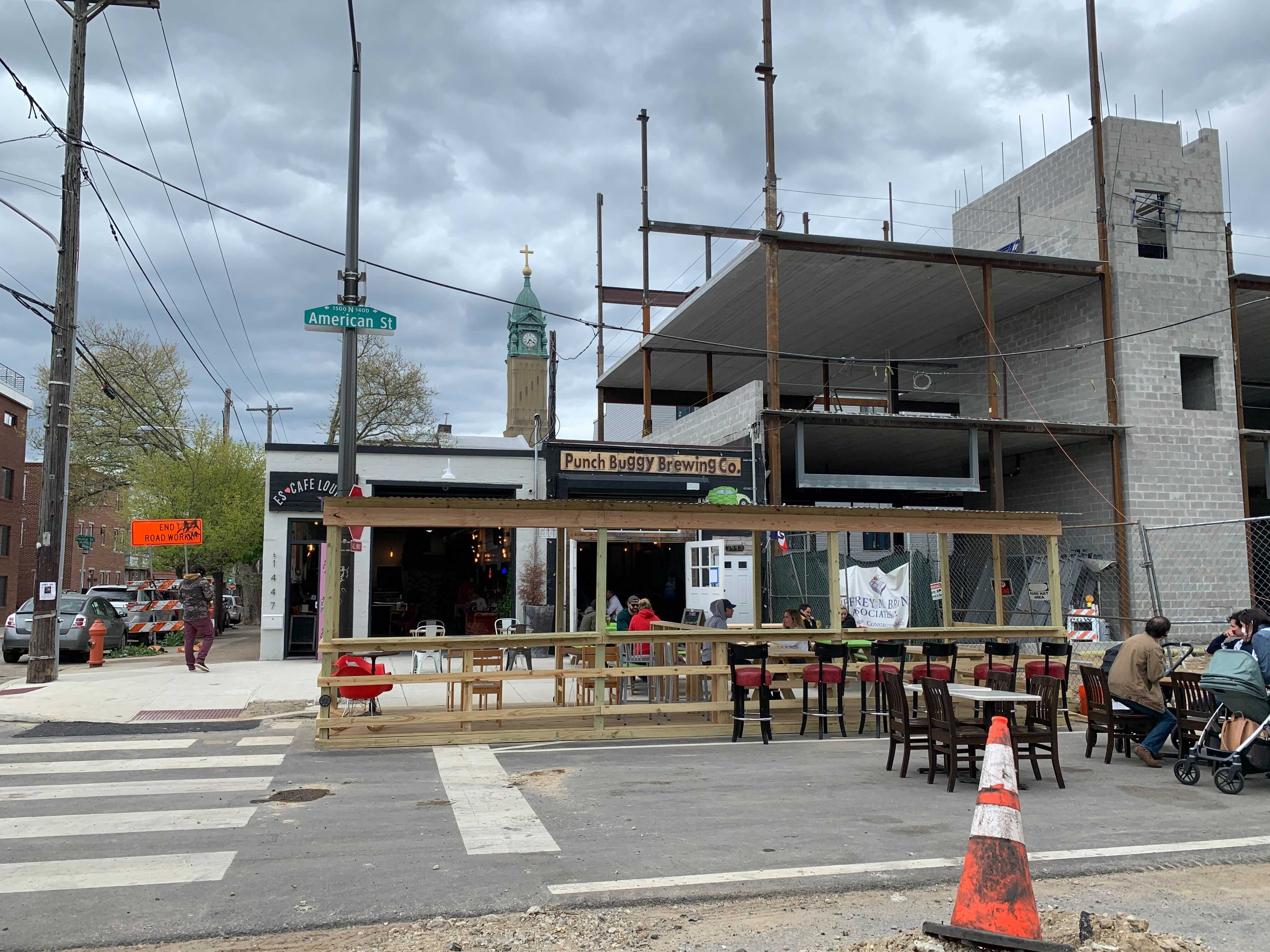 Philadelphia’s upcoming budget debate involves more of a guessing game than usual, with several significant unknowns about the pace of public health recovery, the pace of economic recovery, the extent of the structural changes favoring remote work, residential population changes, and more.

We won’t know the answers to many of these questions by the time Council will need to vote on a budget, but a few articles and reports out this week hold some clues about where the local economy may be headed, and what kinds of policy opportunities we might focus on.

First, Jed Kolko, chief economist for Zillow, and journalists Emily Badger, and Quoctrung Bui wrote in the New York Times with an analysis looking at moving data from the past year, which found very little significant departure from ongoing migration trends during the pandemic. Cities that were already gaining population continued to gain residents, and places that were losing population kept losing. And importantly, apart from the higher levels of out-migration from the top coastal cost-crisis cities, New York and San Francisco, the oft-predicted mass exodus from dense cities turned out to be pretty muted or non-existent.

“But about 30 million change-of-address requests to the U.S. Postal Service in 2020 show that with these two very visible exceptions — and a few smaller ones — migration patterns during the pandemic have looked a lot like migration patterns before it. Some smaller regional metro areas and vacation hubs benefited. But in general, areas that were already attracting new residents kept attracting them. Those that were losing migrants lost more. And there are few examples, at least in the data so far, of previously down-and-out regions drawing people in.

In short, as disruptive as the pandemic has been in nearly every aspect of life, it doesn’t appear to have altered the underlying forces shaping which places are thriving or struggling. The graphic below shows that the metro areas that gained the most net movers in 2020 — or lost the most — are almost entirely the same as those in 2019: 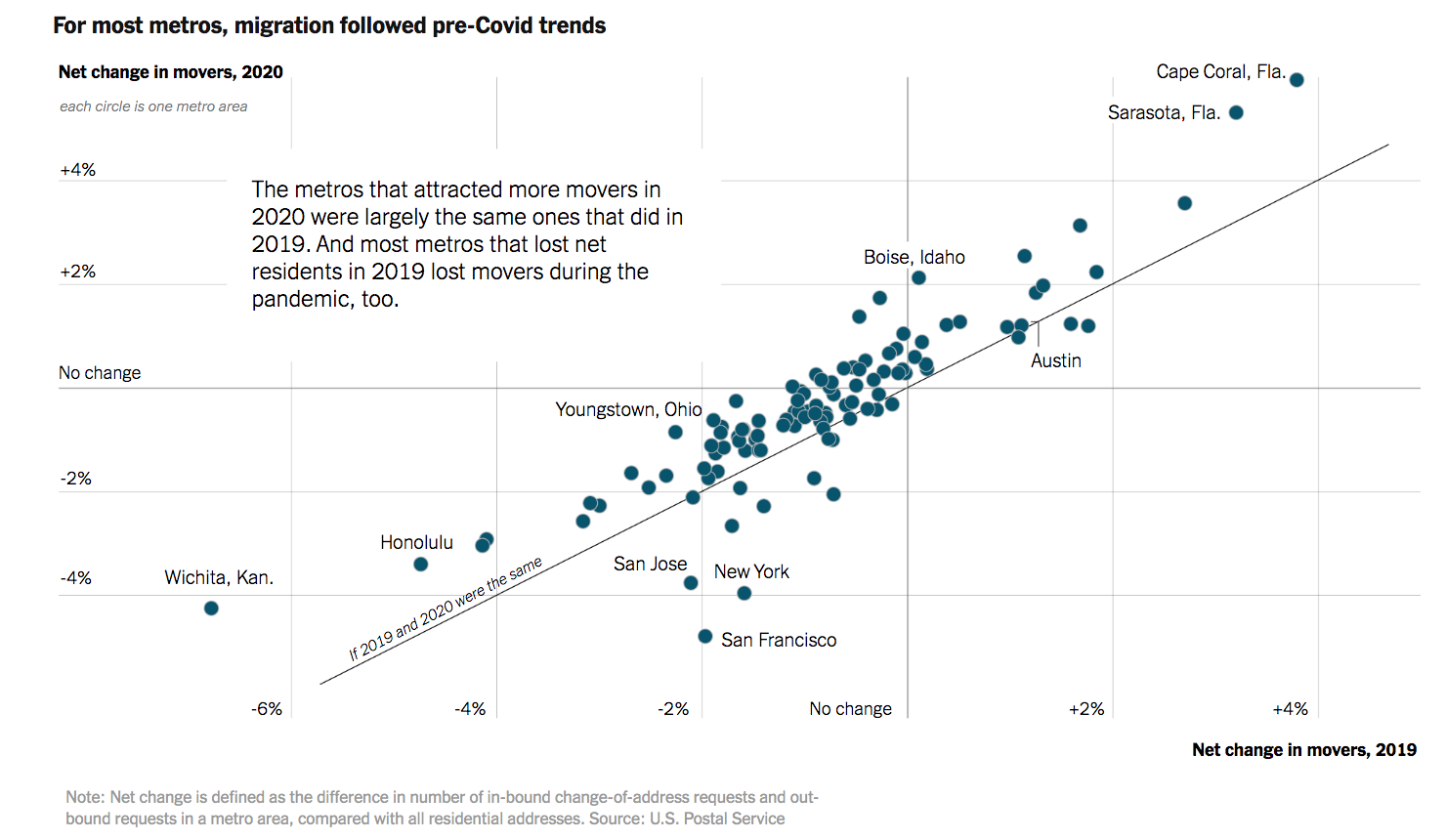 Postal Service and credit reporting data all suggest that the greatest beneficiaries of migrants who did leave New York and San Francisco were other communities relatively close by. Other analyses by The San Francisco Chronicle and the California Policy Lab found that people who left San Francisco mostly stayed within the state, or even within the Bay Area.

It won’t be until later this spring that we’ll get a Census estimate of population shifts in 2020, but some of the reporting over the past year has suggested Philadelphia is benefitting from New York’s population losses. Philly has seen net population gains from New York for several years now, and it would be intuitive that accelerated population loss from New York would redound to Philadelphia’s benefit, although it’s too early to say. There’s early evidence that this is happening in the Poconos, and there’s no good reason why Southeastern Pennsylvania couldn’t enjoy a similar boost by allowing more home-building.

It does matter a lot for tax base reasons where in the Philadelphia region people move to though, and on that point, there is some cause for concern about lower-tax suburbs capturing a suboptimally high share of movers who then wouldn’t pay taxes to Philadelphia.

What we do know, based on analysis from Pew’s new State of the City report and Center City District’s most recent housing report, is that Philadelphia’s housing market has held up very well over the last year. Building permits were up 58% over the previous year, with half the permits issued in the last 3 months of the year.

As the Pew report authors note, the scheduled changes to the 10-year tax abatement on real estate improvements at the end of 2020 (which were later postponed) surely played a role in the race to get permits, but it wasn't just that. Alongside that trend we also saw drastically tightening home inventory and rising prices, both indicating strong demand for housing. There’s also some additional pandemic-related weirdness going on nationally with low home inventory and reduced sales, but the fundamentals have remained positive for housing demand in Philly, with little indication we could start seeing an overall depopulation trend.

At the same time, the city unemployment rate remains stubbornly high at 11.2%, as of February 2021. That’s down from the 2020 high of 18% last June, but it’s still almost double the 5.9% unemployment rate that Philadelphia had last February.

The American Rescue Plan passed by President Biden and Congress, combined with Federal Reserve Chair Jerome Powell’s determination to return to full employment seems likely to drive that down further. But for the moment, it suggests elected officials should be a lot more concerned about economic development and doing all they can to grow jobs in the city using the limited tools in the municipal government toolkit.

One of the things currently working in our favor is that a non-trivial number of people still want to come and live in Philadelphia, and that’s a great situation to be in when the main axis of competition that matters right now is competition for the residential population share of remote workers within southeast PA and the larger mega-region, and municipal government has a lot of power over how much more home construction to allow in Philadelphia. The need to capture more remote worker population share and create more jobs should push everybody to think a lot bigger on that front.