Which Wards Received the Most Money from 2017 District Attorney Candidates?

Azavea 'Summer of Maps' fellow Gabrielle Beaudry has a new blog post up about a fascinating data project she worked on with Committee of 70 analyzing the flow of money from the 2017 District Attorney campaigns through Democratic ward organizations. The results help shed light on some of the less-understood low-level political machinations in our elections, and Beaudry offers helpful advice on improving campaign finance record-keeping to allow for easier citizen analysis.

Beaudry finds that the wards receiving the most money from D.A. candidates in 2017 were the 50th Ward in Northwest Philly, at that point run by Marian Tasco, and ward 40A in southwest Philly.

Next up were the 58th Ward in Northeast Philly, and the 10th Ward (right next to the 50th in the Northwest.) Check out the Philly Ward Leaders site to learn more about some of the political personalities involved in these areas. 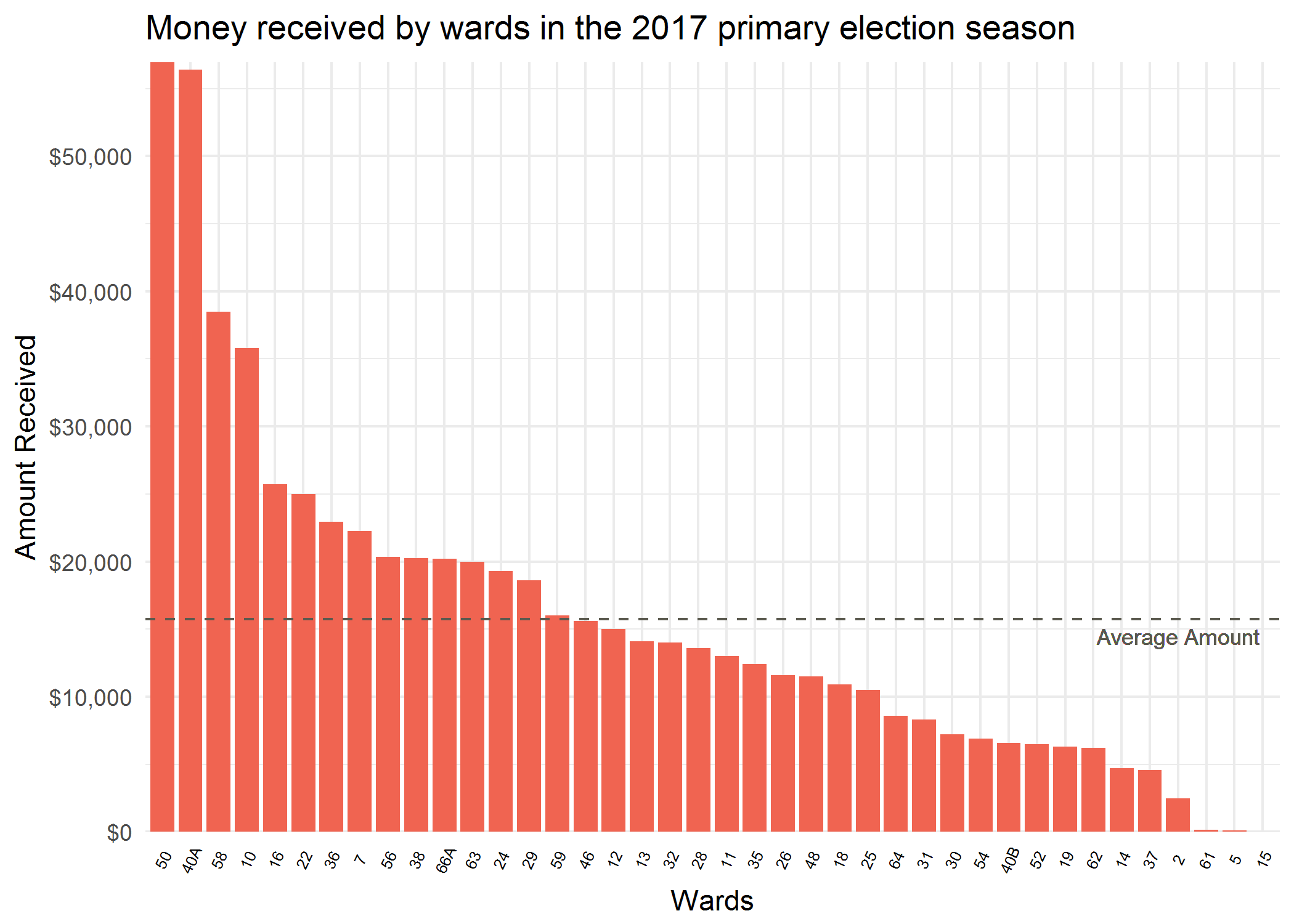 It's important to note that only 35 of the 66 wards, or about half, filed campaign finance reports at all for this cycle, so this analysis only covers the campaign spending we know about.

Beaudry also broke down the campaign spend in different wards by each of the D.A. candidates. Michael Untermeyer seems have done the most overall ward spending and spread his money around the most, while most of the other candidates targeted a handful of wards presumably to drive turnout among their base voters. It would be interesting to see a follow-up analysis of whether these contributions actually did materialize into higher turnout for the donor candidates in these wards.

She also shows how much money each ward received from each candidate and the discrepancy in filing between what the wards reported receiving and what the candidates reported giving. Campaign finance reports are filed by both candidate PACs and ward PACs, and detail both money received and money spent, along with the recipients of the spending.

The post also goes deep in the weeds on using R to analyze campaign finance data, and the difficulty of creating a useful data set due to inconsistencies in how Ward PACs are referenced by the campaigns.

"In order to analyze money flowing into wards, it’s necessary to group all transactions involving each ward together. However, each ward is accounted for in the YTD Transaction file a number of different ways because they are hand entered [...]

To overcome this reporting issue, Beaudry suggests using identification codes for each political entity (ward committee, ward leader, candidate, PAC, etc.) to standardize reporting for each entity, and including only the final versions of campaign reports in the dataset.

"Codes would be available online for easy look-up, and any activity related to that entity would be easily searchable. Policy makers and citizens alike could query a candidate’s spending record, or how much money a ward is receiving from a candidate without the prerequisite of a working knowledge in a statistical programming language. It would also be useful for in-kind contributions to be filed with an estimated dollar amount for the worth of the contribution, and thus lend themselves to inclusion in monetary analysis."

We hope the relevant officials will heed Beadry's advice, as this kind of analysis shows a lot of promise for tracking an important source of political influence in downballot elections, as well as insights into candidates' perceptions about who their voting base is, or which areas of the city have the power to get them elected.