City Commissioners lost a bunch of voter registrations in 2017

So it turns out the City Commissioners processed a ton of voter registrations really late and lost a bunch more. This is not good or surprising news. 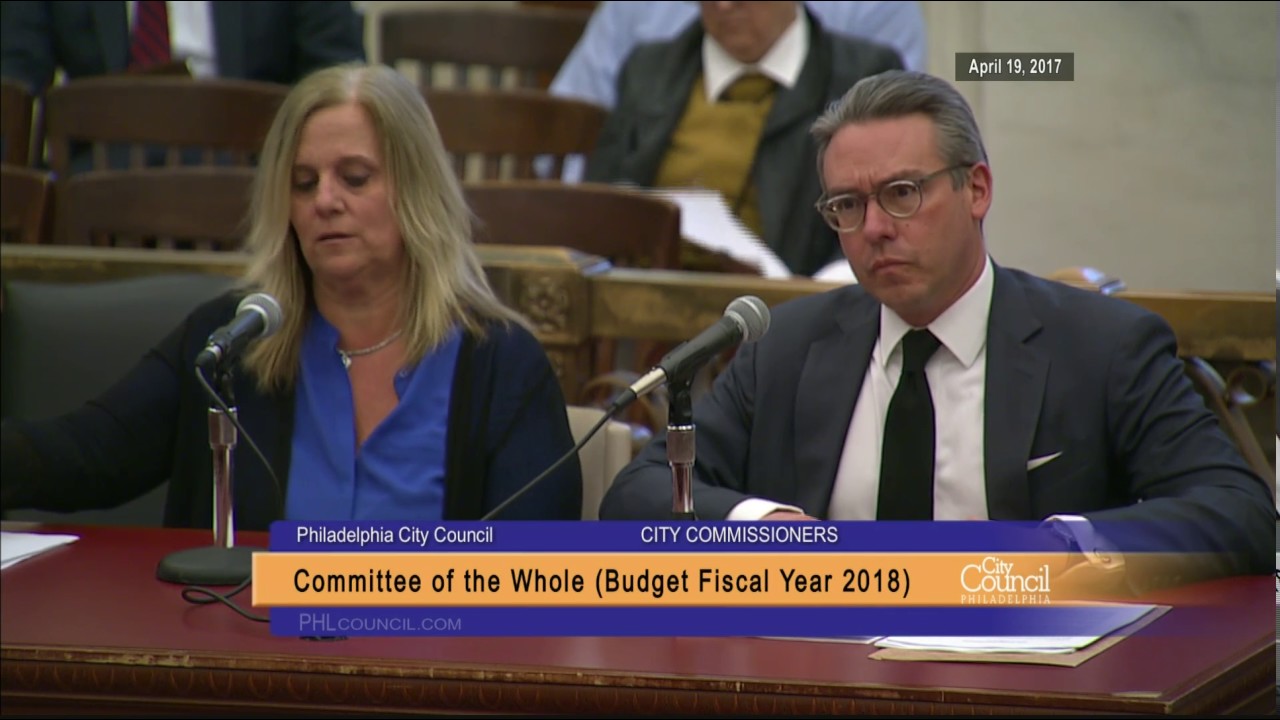 (Two of the three City Commissioners at this year's budget hearing; the third doesn't even pretend to give a fuck.)

Yesterday, the election modernization group Keystone Votes released a report outlining two major problems that arose in the lead-up to the November general election. Their analysis determined that the City Commissioners 1) processed tens of thousands of voter registrations late, and 2) flat out lost a bunch more.

These are separate but related bureaucratic failures, so let's start from the top.

The late-processed applications story is a bit complicated but highly instructive. After the election, the Public Interest Law Center requested statewide voter registration data from the PA Department of State. From this data, the Law Center determined that 25,429 valid voter registrations that were submitted on-time weren't processed until October 31st or later.

These voters made it onto the rolls but likely didn't receive a voter card and probably weren't included in the main poll book. Neither of these issues is disenfranchising, however both are seriously discouraging. It would take a pretty sophisticated voter to know, in the absence of a registration card, how to confirm her registration status online. Similarly, only a really knowledgeable voter knows to ask a poll worker to check the supplemental poll book if his name isn't listed in the main poll book.

Notably, this isn't just a "Philly is really big" issue. Allegheny County, the second largest county in the Commonwealth, knocked it out of the park. Out of 163,949 total applications, only 386 (or 0.2%) were processed late. It's also not a "presidential years are really busy" issue, either. The Commissioners Office knows that registrations peak every four years--not only that, they can look at historic registration data to track day-to-day trends--and have all the info they would need to oversee operations accordingly.

In response to this part of the report, City Commissioner Al Schmidt told Billy Penn, “It isn’t possible to address these allegations without knowing how they arrived at their numbers.” But it's entirely clear how the Law Center arrived at their numbers! They looked at the voter roll and identified on-time registrations that weren't added to the rolls until less than eight days before the election. The Commissioners could repeat this work and would end up with exactly the same number as the Law Center.

This one is simpler: The Commissioners Office lost voter registration applications. This issue came to light when some of the groups Keystone Votes works with began flagging the same issue over and over. These groups--Asian Americans United, Project HOME, and Penn Law American Constitution Society--were tracking the registration statuses of folks they registered and noticed a bunch weren't being added to the rolls. 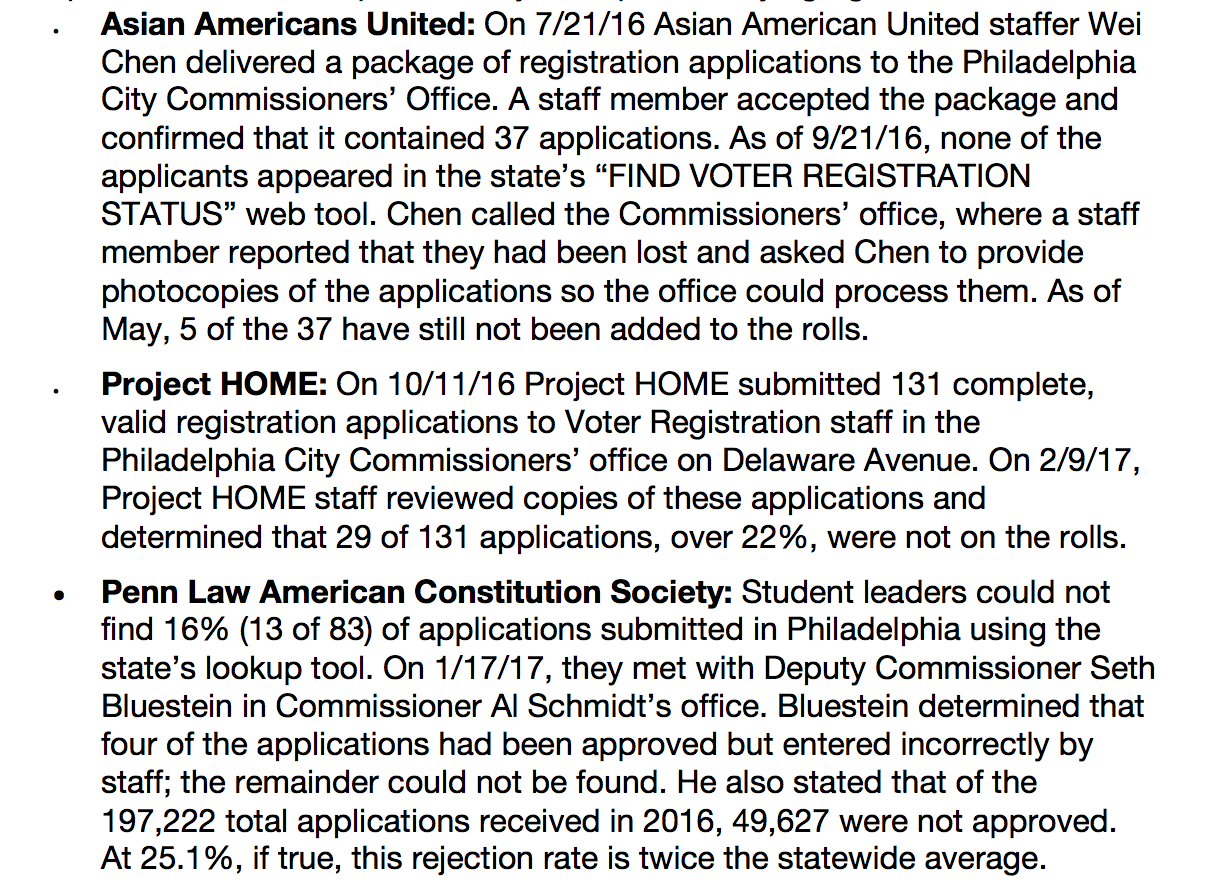 After hearing this story a bunch of times, Keystone Votes worked with the Committee of Seventy and some Penn Law volunteers to see how bad the lost registration problem could be.

The groups analyzed a sample of 2,149 registrations submitted by Keystone Votes' partner groups, almost all of whom had photocopies of the registration cards they submitted. Some of these registrations were good, and some had disqualifying problems.

From this sample, Seventy and Penn ASC determined that 1,880 applications were valid and complete. Of those, 1,582 were added to the rolls but 352 were not. That is to say, their random-ish and representative-ish study (ed note: I'm a social science PhD and I approve this method) revealed a lost rate of 19% (352/1880). This is insane, and if the actual lost rate is even half that, the outcome is catastrophic.

What does this all mean? Well, it means that a bunch of Philadelphians were disenfranchised. The PA Department of State had a great response:

"We are reviewing the findings in the Keystone Votes report and will continue our ongoing work with the counties to identify ways in which processes can be improved.

"The Keystone Votes report confirmed a key belief of Governor Wolf and the Department of State – that Online Voter Registration (OVR) is the single most effective way to ensure that voter registration applications are received and processed in a timely fashion. With OVR, there are no incomplete or illegible application forms. With OVR, citizens can track their application as it moves through the verification process. Moving forward, wider use of the Department's new OVR Web API will greatly mitigate the problems encountered with traditional paper-based applications used in most voter registration drives."

Yes to all of this. But that's not going to happen overnight. And it doesn't address the emergent and acute issues facing Philadelphia County specifically.

As voter experience demonstrates again and again, the City Commissioners office doesn't work. We're the only county in the US that elects three people to do nothing except oversee (75% of) elections. That's why 3.0 is advocating for the elimination of the City Commissioners Office and the creation of a Department of Elections. It is well past time that we overhaul our broken election system, and this report adds more fuel to the fire.