A new behavioral research study undertaken by the City of Philadelphia and three prestigious university research partners has confirmed something so painfully obvious it's actually insane we're wasting time arguing about it: that putting out more public trash cans reduces litter on the streets.

The significance of the study is that, inside the Streets Department, some people actually believe that taking away public trash cans reduces litter. Putting out pubic trash cans, the thinking goes, will only make things dirtier by attracting more trash, sometimes even household trash and commercial trash, and the solution is to take cans away:

This study was inspired by debates within city government about whether more or fewer trash receptacles result in less litter. In 2011, New York City began experimenting with removing trash receptacles from select public transportation stations. While this effort was initially praised, as it seemed removing the receptacles counter-intuitively decreased litter at the stations, recent audits have revealed that the removal actually increased litter and track fires at the affected stations. However, there has been growing interest in the City of Philadelphia and other municipalities regarding the introduction of similar changes. Here, we sought to assess the influence of both increasing and decreasing the number of available trash receptacles in public spaces on citizens’ waste disposal [...]

A major impetus for conducting this experiment was an operational debate that occurs in many City operating departments that deal with trash between the adding and removing of public waste receptacles. Some operations staff err on the side of public opinion that Philadelphia needs more public waste receptacles, while others disagree and feel that removing receptacles will prevent household trash dumping and force people to either hold onto their trash or waste less.

It isn't hard to imagine why the counter-intuitive and self-serving idea that taking away public trash cans is Actually Good would catch on within Streets. It's less work for them, and it makes streets cleaner? What's not to like?

The trouble is, as the preamble to the study says, this has been debunked by recent audits of the New York City program which found the extremely intuitive story about how this works is basically correct, and removing public trash cans increased litter in the long run and even contributed to some subway track fires in places it was tried. Yikes! And yet, according to the authors there has still been "growing interest" in implementing these failed ideas in Philadelphia, because of course there has.

The study itself is well-done and offers persuasive enough evidence that increasing the presence of public trash cans would be an effective litter reduction strategy.  The topline findings were that when there were fewer trash cans, less trash was generally collected, but reducing the number of public trash cans "dramatically" increased the amount of trash collected as litter, and increased the hours that Parks staff had to spend cleaning up litter.

Great experiment. Important findings. Also: Duh! Fucking duh! Everybody knows this is how it works. On our neighborhood Facebook groups in Fishtown, several times a month there are 100-comment threads about how much trash and litter there is everywhere, and how badly we need more trash cans and street sweeping. People know what's up. 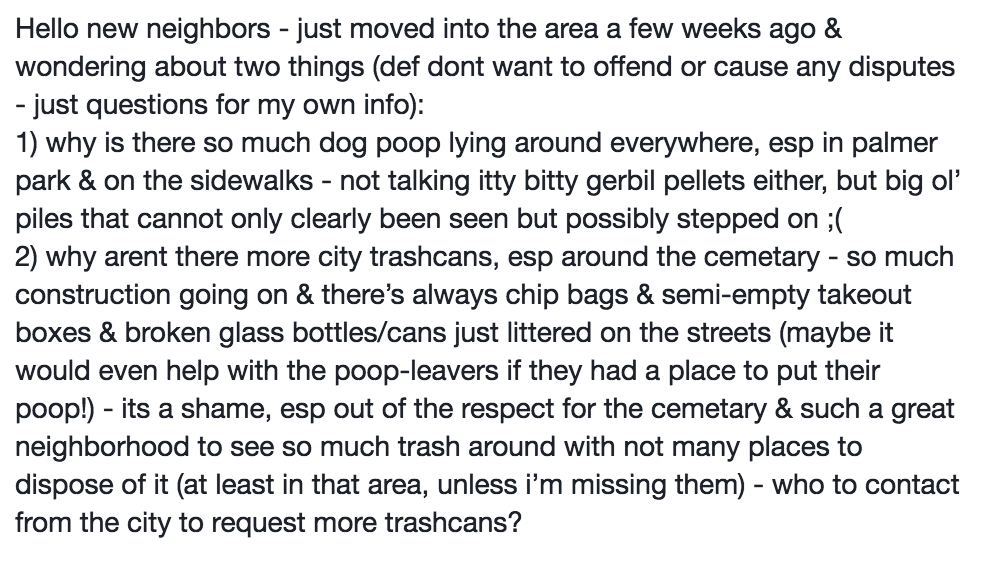 In the Recommendations section, they say the City is going to take this finding seriously and put out more street trash cans, but there's some concerning stuff here too about exactly how that will occur, with references to an expansion of "adopt-a-can" business programs.

The Clean PHL initiative in the past has used the Feed the Fish program from Fishtown Neighbors Association (where I am a board member) as a replicable example of how the City can expand public trash cans, at least on commercial corridors. Speaking just as an individual, not for FNA, it's been frustrating to me watching the City unfurl a Mission Accomplished banner over the trash situation in Fishtown, as anybody who lives in the neighborhood will tell you it's still plenty dirty! The adopt-a-can program is a necessary but insufficient bandaid on a much larger set of problems caused by miserly municipal sanitation services, and it's just misleading to advertise it as an alternative to a more robust municipal program.

The replicability is also way overstated. The major capital costs of Feed the Fish are paid for by grant funding from Penn Treaty Special Services District, which is a resource neighborhoods without casinos aren't going to have. And then you have to get the wire basket trash cans from Streets. I don't say this with the intent of embarrassing anybody, but I think it's important context that when I tried to get 10 wire basket trash cans from Streets to help FNA expand Feed the Fish this past year, it took about four months of active lobbying at the highest levels of the Streets Department to make it happen. People who definitely shouldn't have had to be involved in the minutiae of resident trash can requests were involved. Over 10 baskets.

Let's not make people become activists just to get the trash picked up and the streets swept. Make it easy. Put out enough trash cans. Pick up trash from public cans on a frequent enough rotation. Pay people to sweep the streets a few times a month. It's maddening that a municipal solution to this set of problems has so far gone untried, but has already been ruled out as unworkable by top brass at Streets. Hopefully this study gives Mayor Kenney whatever evidence he could possibly still need to reject the cult of can-lessness.