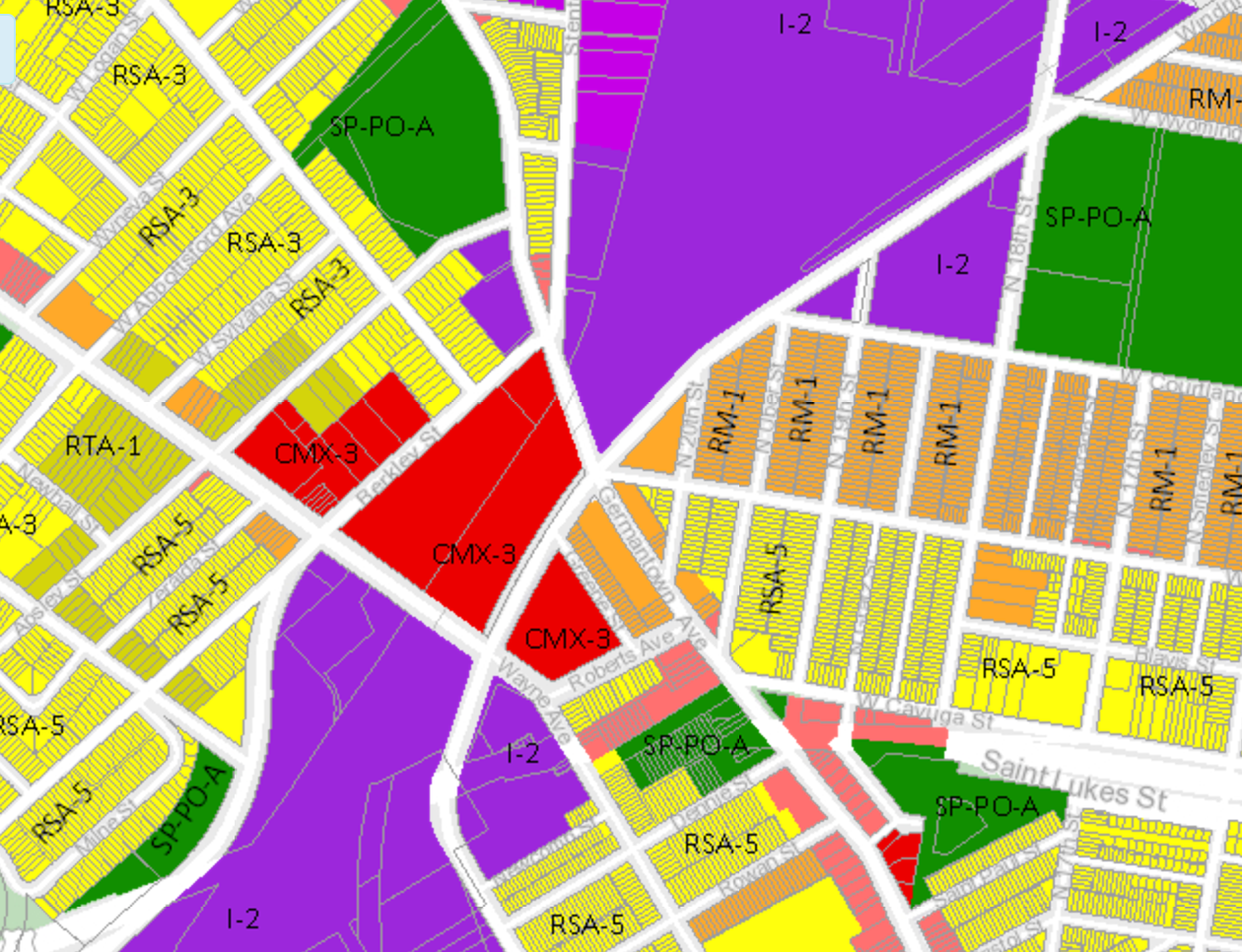 This is a great example of the kind of development pattern Philly needs and should be encouraging—moderate density mixed-use development, clustered near good public transit. To their credit, City Council has taken some baby steps in this direction recently by passing new Transit-Oriented Development Overlay language. Now they have to pick some stations for the overlays, and Wayne Junction is a fantastic candidate.

Philly has some amazing and criminally-overlooked commuter rail assets that lots of other growing cities in the South and the Sunbelt would kill for. While they're building cutesy downtown trams, we have an electrified commuter rail network that reaches deep into our suburbs, making transit commuting a real option for lots of people metro-wide.

SEPTA's been making steady improvements in the regional rail network, and Wayne Junction has been one of the beneficiaries of this, receiving a $31.5 million station upgrade back in 2015, Adelman says. Those improvements included "new lighting, repaired structures and canopies, restored passenger tunnels and stairways, and 40 security cameras," according to the Inquirer, and they won support from the FTA in part because of the redevelopment potential in this area.

"The station's potential as a catalyst for redevelopment is in part why the Federal Transit Administration granted $3.98 million to the project in 2011.

"It had been an eyesore," said Therese McMillan, FTA acting administrator, after the ribbon-cutting, "but they knew it could be a place that could develop as a community center."

The station is a transfer point for the Route 75 trolley, the 23 and 53 bus routes, and six Regional Rail lines."

So Wayne Junction has transportation capacity out the wazoo, and land within a 10-15 minute walk from the station is ideally suited to accommodate some more intense land development. A lot more people could live and work nearby and walk to Wayne Junction to get where they need to go.  Optimistically, the station could support a smaller satellite downtown in the Northwest if others decide to follow Weinstein's lead.

That's what the FTA intended when they upgraded the Wayne Junction train station, at least, but unfortunately, City Council hasn't done their part to leverage this investment into more redevelopment because the zoning still prioritizes single-family homes in this area instead of the type of mixed-use neighborhood that Weinstein is envisioning.

As you can see from the zoning map, only the immediate parcels northwest of the station (near Wayne and Roberts Ave) are zoned for CMX-3 (mid-rise mixed-use), which are marked in red. There are some huge lots (in purple) that are still inappropriately zoned for industrial use, that really should be zoned for mixed-use commercial and residential. The single-family and small apartment building zoning (in yellow and orange) also begins right across the street from the station, inappropriately capping the number of people who can live close by to this useful and expensive public asset.

One thing Councilmember Cindy Bass could do right away is pass a Transit-Oriented Development (TOD) Overlay for the Wayne Junction station area. City Council just passed new language to help streamline these overlays, which increase allowable density, and reduce minimum parking requirements by half within 500 feet of the station. The result will be more housing and less parking near the station, and an overlay would also improve the odds that Weinstein doesn't need a zoning variance for the redevelopment plan announced this week.

The 500-foot radius doesn't reach those industrially-zoned parcels or residential blocks nearby, so some broader rezoning is in order. This example also highlights why the TOD Overlay should be expanded beyond 500 feet. Five hundred feet only takes you past the end of the blocks—a totally arbitrary distance—but the half-mile radius captures everything within about 10-minute walk from the station. That's significant because 10 minutes is about the limit of how far the average person is willing to walk to the train.

A half-mile radius would also extend transit-oriented zoning almost to the Erie and Wyoming stations on the Broad Street Line too, which could be important anchors for a new Uptown business district. 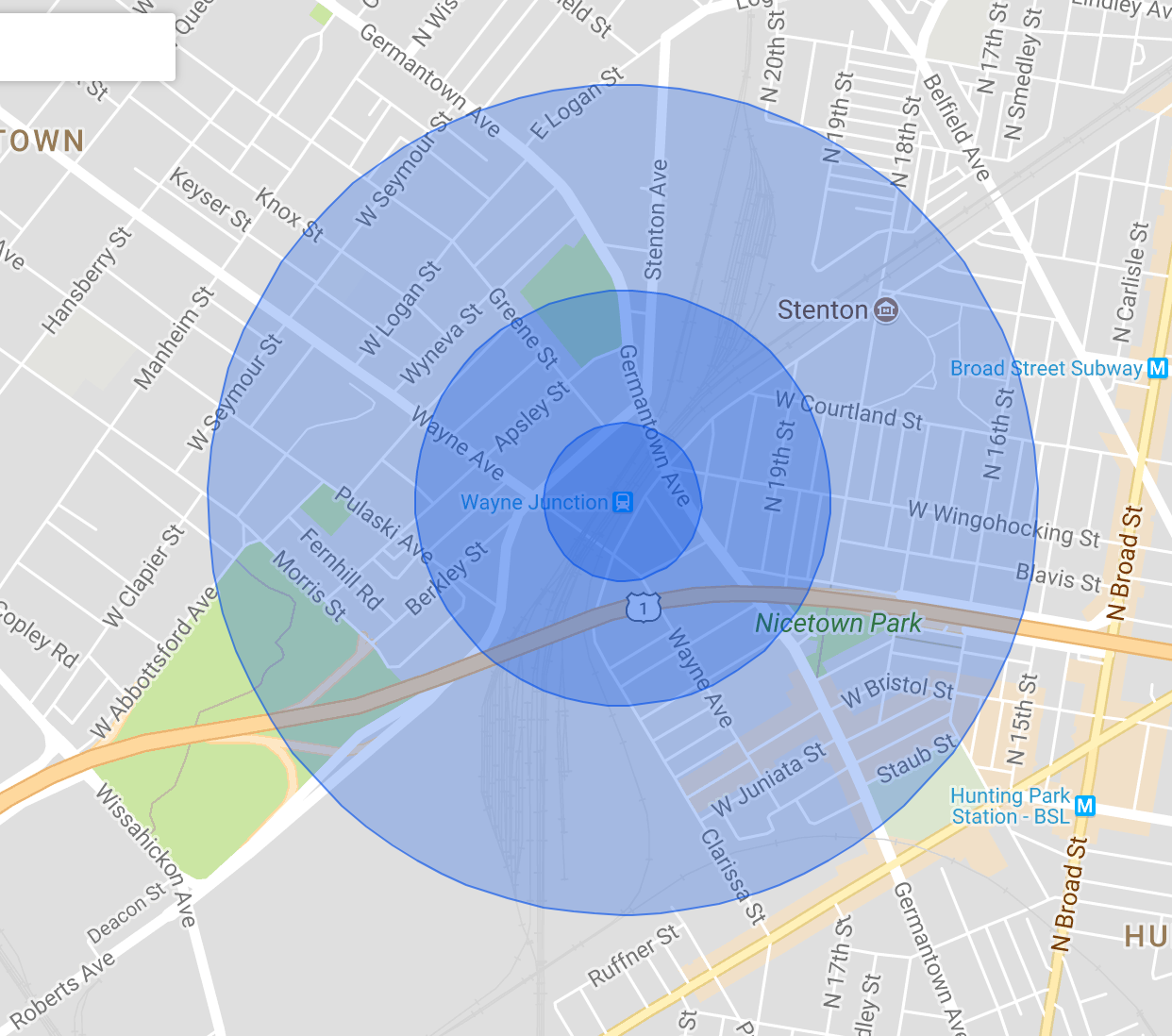 The Philly Office Retail proposal shows there's some early interest in building on North Philly's strong transit assets. SEPTA has been doing their part with the limited funds they have to invest in better regional rail service, and now City Council needs to do their part to make those transit investments useful to more people by delivering supportive zoning.