Registered Democratic and Republican voters will have the opportunity to collectively elect over 3,200 committeeperson candidates citywide in each party—two from each party per voting division. Read our FAQ to get up to speed on how the ward system works.

While we're still analyzing the petition filings to see where things landed in the different wards, there are some early takeaways we wanted to share that suggest our candidate recruitment drive was successful.

We recruited about 250 candidates to run

Between November 2016 and February 2018, a little over 1,000 candidate prospects came in through our program to run for committeeperson in 2018, representing all but two out of sixty-six wards. About 250 of those candidate prospects will officially be candidates on the ballot on May 15th—about a 25% conversion rate.

We expect that when the dust settles on petition challenges, candidates who came through our program will make up between 8-9% of the total candidates running citywide, and a much higher percentage in some specific wards, namely those in greater Center City, South Philly, and the Riverwards. All-in-all, candidates coming through our program are represented in 43 of 66 wards, or 65% of all wards.

Half the candidates running are non-incumbents

The party line on the petition filing numbers has been that efforts by Philadelphia 3.0 and other groups must be a failure because the total citywide filings increased by just five candidates, from 3,262 filings in 2014 to 3,267 filings in 2018.

But according to Commissioner Al Schmidt, almost exactly half of the candidates running in 2018 are new candidates. The top line number is masking tons of churn below the surface. As this map from Schmidt's office shows, in most wards the non-incumbent share of filings is surging. 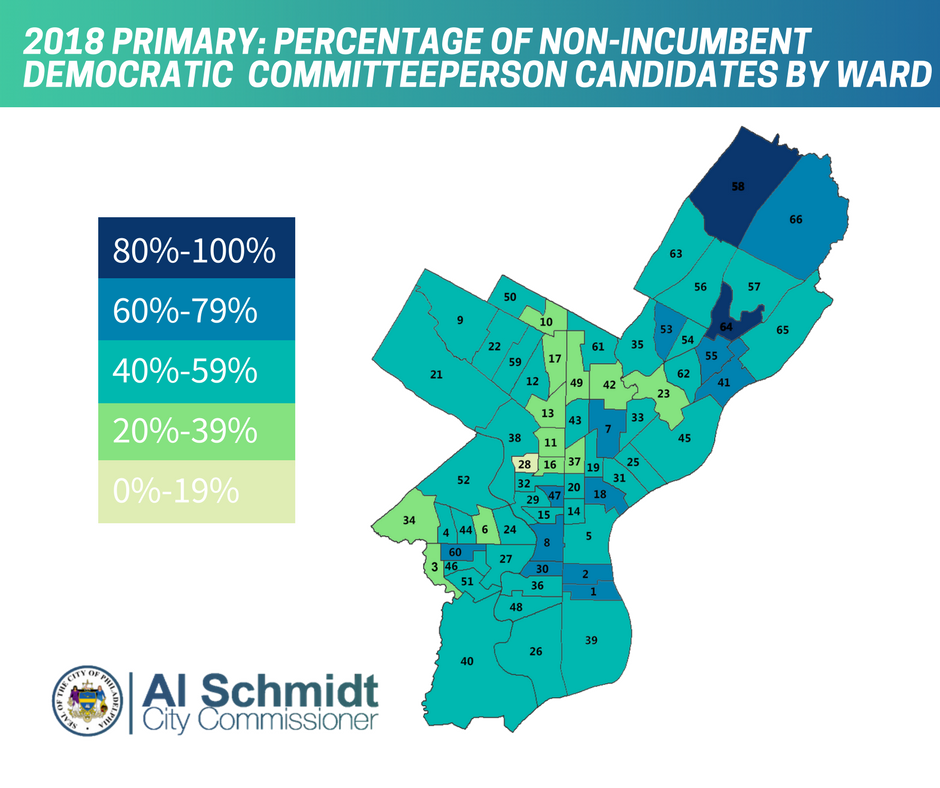 The most extreme examples you see are in wards 58, 64, and 66 in Northeast Philly, where there was some serious turf warfare between the Sabatina and Boyle camps largely unrelated to our efforts. But there were also large increases in the share of non-incumbent candidates in growing areas of greater Center City, South Philly, and the Riverwards, where many more of our recruited candidates filed. In the 15 or so wards we paid most attention to, incumbents make up only 44% of the filed candidates on average, and only in four of those wards do incumbents make up more than 50% of filed candidates.

To be clear, not all of these non-incumbents are running to vote in a new ward leader. Many of them were likely recruited by incumbent ward leaders to fill vacated seats, of which there were many. The city Democratic Party is a very old party, demographically speaking. Just anecdotally, looking through the filings, the number of petitioners whose occupation was listed as "retired" was remarkable. It makes sense that we would see a wave of retirements in these elections every 4 years. Unfortunately, the 2010 committeeperson election results have not been compiled digitally, so there is not a ready way to compare retirements from the 2010-2014 cycle to the 2014-2018 cycle. Nevertheless, it's objectively a lot of turnover.

Again, anecdotally, several candidates running in South Philly in the 1st ward told us that on more than one occasion, when they approached their current committeeperson about running, many were excited to step aside and be rid of the responsibility. In some other places, the reaction was exactly the opposite, with the prospect of a challenger spurring people to action.

There are 381 open seats that no one is running for in 2018, compared to 349 open seats in 2014. In a follow-up post we'll be digging into which wards had the greatest number of open seats. Any party member in the division can run a write-in campaign to win these seats, rather than leave the ward leader to appoint someone.

Someone can win a write-in seat with a single vote, but if you're serious about winning, it's best to get a lot of neighbors to write your name in just for insurance. If you didn't make the ballot but are interested in running as a write-in, sign up on our form and we'll let you know if there's an open seat in your division.