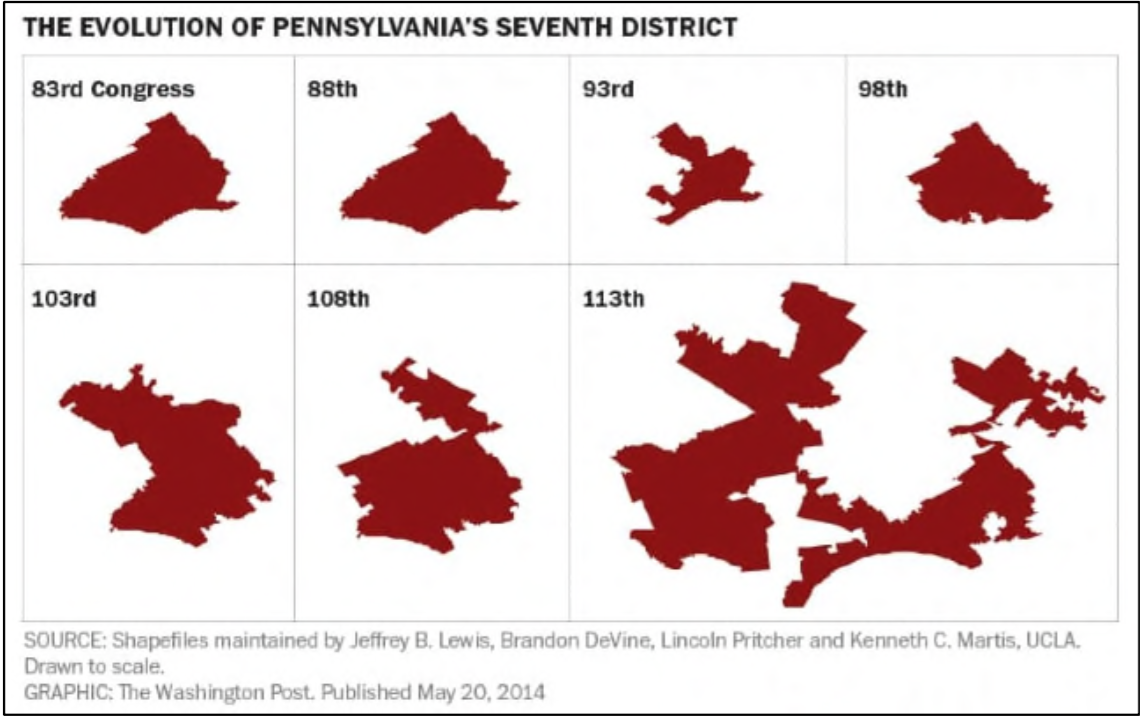 If you want to go down the rabbit hole on the issues and the developments in this case so far, the folks at PILCOP have been frequently updating their redistricting lawsuit mothership page, but here's what you need to know right now:

In his opinion, Judge Brobson concluded that the petitioners, 18 voters representing each of Pennsylvania’s U.S. House districts, and their legal team, established that the 2011 map intentionally discriminates, “so as to grant Republican candidates an advantage in certain districts within the Commonwealth.” In other words, Judge Brobson found, “the 2011 Plan was drawn to give Republican candidates an advantage.” He also found that all four of the petitioners’ expert witnesses are credible, while rejecting the analyses and opinions of the legislative respondents’ only two witnesses. In sum, Judge Brobson concluded, “A lot can and has been said about the 2011 Plan, much of which is unflattering and yet justified.”

While he determined that petitioners did not present a manageable standard for deciding if the map had been excessively gerrymandered, he found that “partisan considerations are evident in the enacted 2011 plan such that the 2011 plan overall favors the Republican party in certain congressional districts.”

The Pennsylvania Supreme Court has ordered expedited briefing and will hear oral argument in the case on January 17.

Commonwealth Court didn't strike down the map, but they teed everything up for the Pennsylvania Supreme Court to do it, and Democrats have a majority on the state Supreme Court.

If the PA Supreme Court rules that the Congressional map is unconstitutional (according to the state Constitution, not federal) a new map will need to be put into place.

One issue to watch will be whether the Court says any consideration of partisan advantage is unconstitutional when drawing maps, or if they say some consideration of partisan effects is acceptable, but the Republicans went too far with the current Congressional map. They could also adopt one of the standards proposed by various scholars, like the 'efficiency gap' concept, where the goal is to minimize wasted votes for both parties.

This chart from the plaintiffs' post-trial documents shows that the Pennsylvania efficiency gap is very high, meaning there are a lot of votes being wasted in uncompetitive districts, both relative to past maps in Pennsylvania and compared to other states. 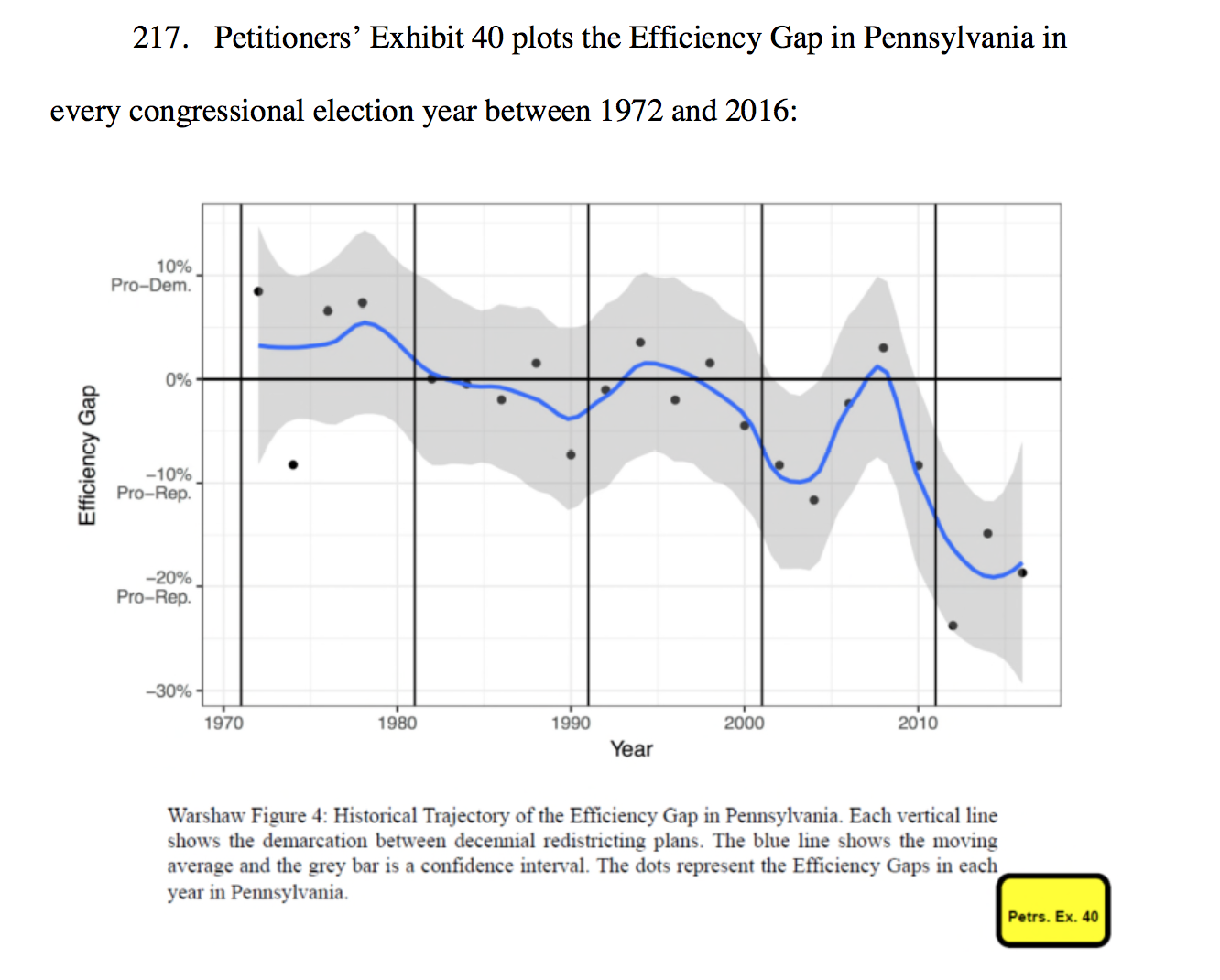 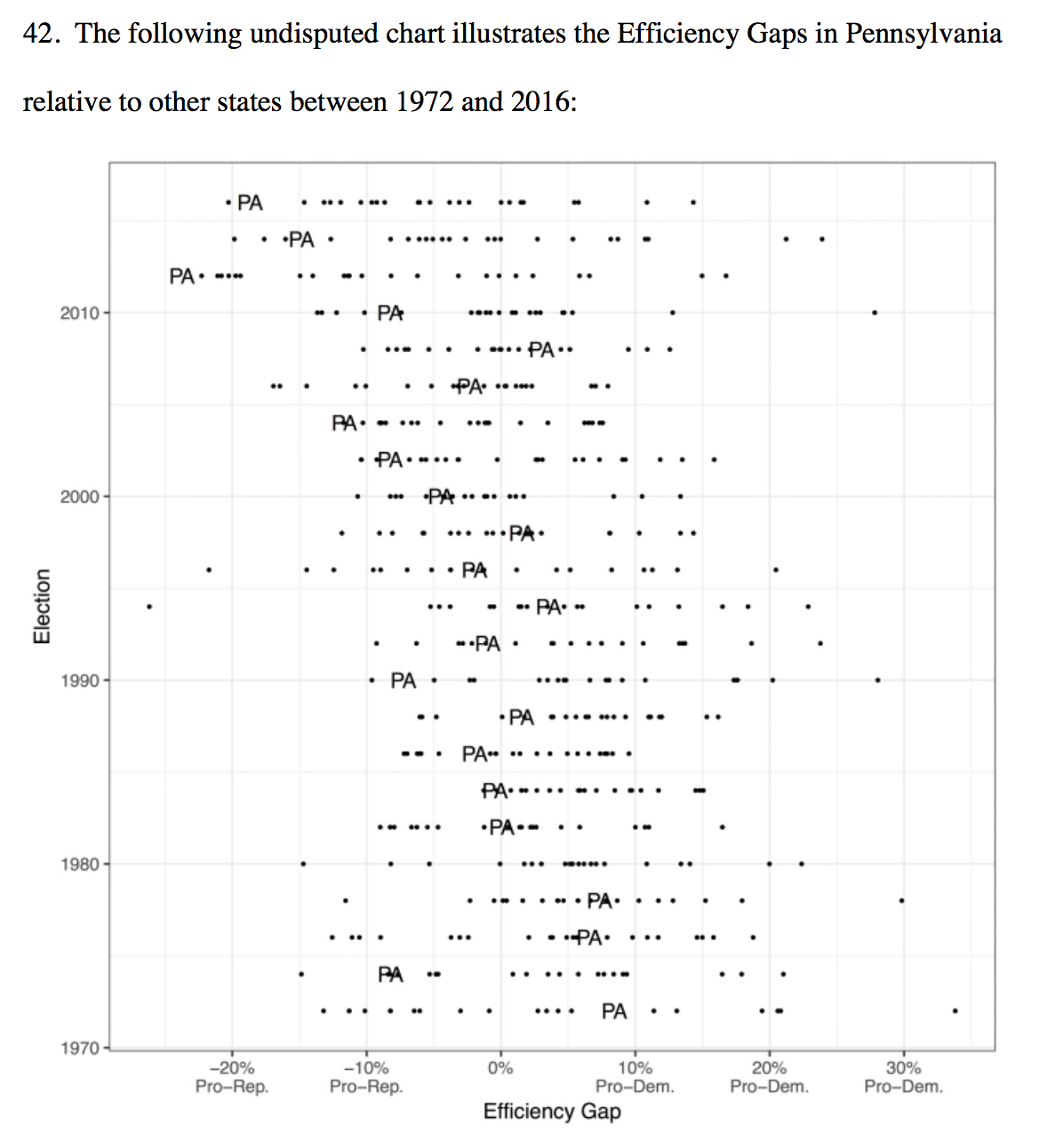 A mathematician's simulation of 1,000 possible machine-drawn districts presented by the plaintiffs also showed that an effort to draw the maps based on some standard principles of fair district would likely result in Republicans holding between 8-10 of Pennsylvania's Congressional seats, versus the 13 they have now. 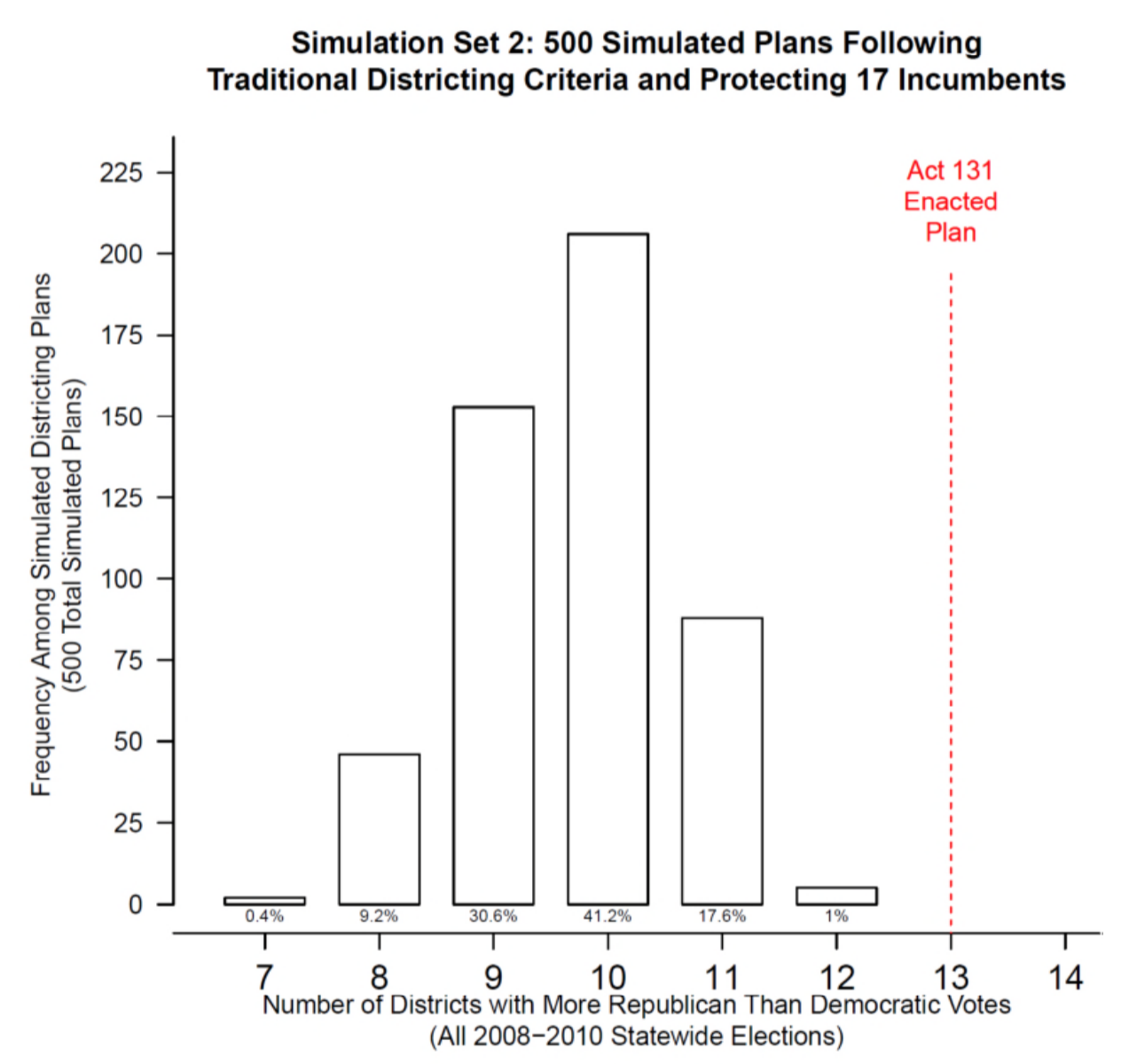 Via Daily Kos, here is what a hypothetical non-partisan map would look like: 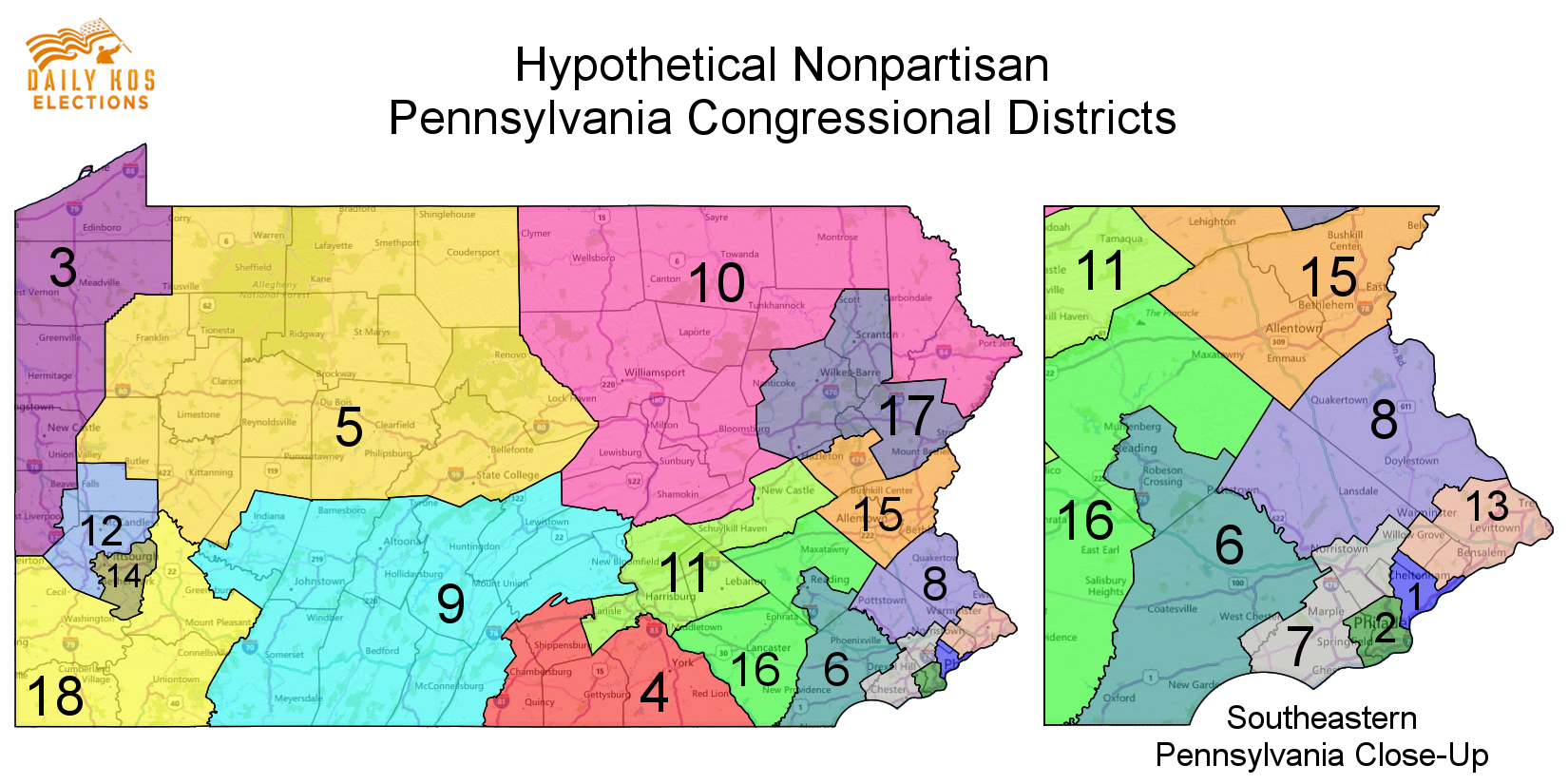 If the Court finds the maps to be unconstitutional, they could either task the legislature with drawing a new map that abides by certain principles, or they could impose their own map. Oral arguments in this case will take place on January 17th, so we could have a decision very soon, and some brand new Congressional map in time for the 2018 cycle.

For there to be no disruptions to the primary election schedule, the new map would have to be in place by late January or very early February. The petition period to get on the ballot starts on February 13th, so it's possible petitions could be pushed back by a few weeks if there is a long delay. It is still unclear whether petitions for state offices (or ward elections) would also be delayed if it takes a while for the legislature to approve new maps.

If the May 15th primary election for Congress is delayed, and needs to be held on a separate date than state elections, the additional election could cost the state as much as $20 million, according to the Public Interest Law Center. So if the Supreme Court strikes down the map, the pressure will be on to wrap this up in a fair and timely way.