What Will the CARES Act Do for Philadelphia? 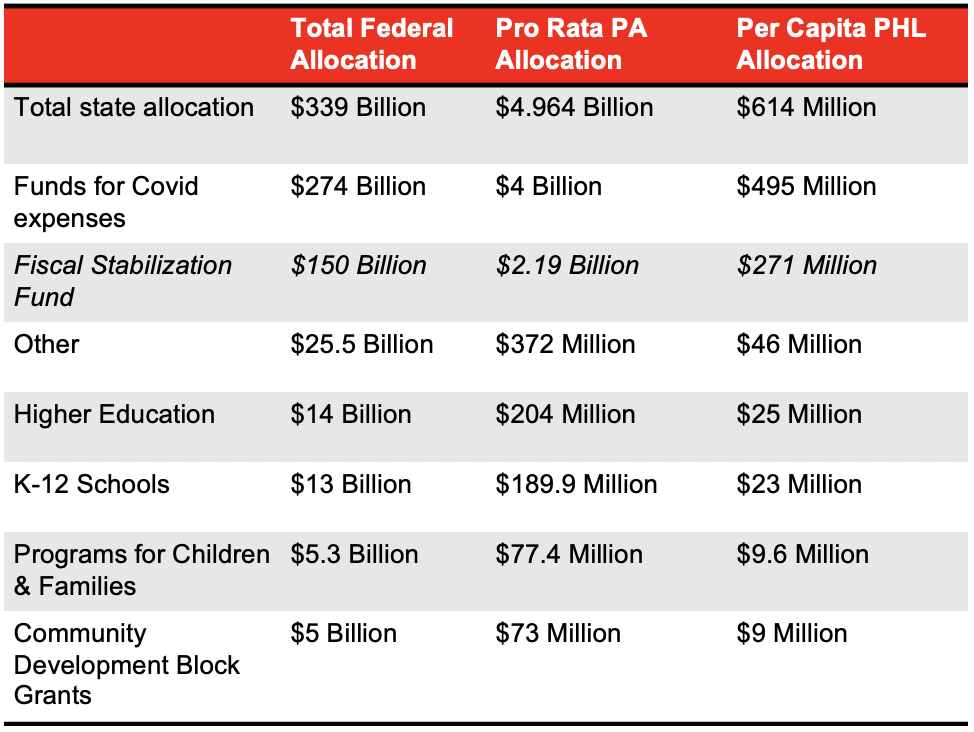 The CARES Act (aka the Coronavirus Aid, Relief, and Economic Security Act) is the largest federal stimulus bill in American history. At the time of the bill’s signing, estimates put anticipated spending at roughly $2.2 trillion. To put that figure in context, the Federal government spent $4.4 trillion in 2019, and the Bush-era Economic Stimulus Act of 2008 included roughly $152 billion in spending. Funding from the CARES Act will likely touch every part of the government, and at every level.

Much of the media’s coverage to date has focused on three areas of the stimulus: Direct checks to individuals and households, an expansion of unemployment benefits, and relief for large and small businesses. Not much attention has been paid to the $339.8 billion that is directed to state and local governments. With that in mind, let’s focus on what Philadelphia and Pennsylvania can hope to receive from the stimulus.

Pennsylvania is believed to be allocated $4.964 billion. At present, we have no way to ballpark what Philadelphia will receive, because cities aren’t directly allocated any funding as part of the CARES legislation. Instead, cities must apply to the Treasury Department for a share of their state’s pot. In aggregate, all of the qualifying cities in a state can receive up to 45% of their state’s total funding allocation. In Pennsylvania, that would mean a minimum of $2.730 billion reserved for the state and a maximum of $2.234 billion paid out to qualifying cities. Importantly, the United States Conference of Mayors is advocating for direct-to-cities funding, although those dollars would have to wait until the next wave of stimulus.

Part of the challenge in estimating Philadelphia's share is that we don’t have any indication as to how the Secretary of the Treasury will respond to requests by cities for funding. Will cities always get most or all of their state’s 45% allocation? Will city applications be allocated first-come, first-served? Will a de facto per capita or per infection formula be established? Additionally, there is an expectation among the National Conference of State Legislatures that any funds remaining from the 45% set aside for cities will revert back to their home state. This could conceivably put mayors and their governors at cross-pressures, particularly if there are partisan dynamics at play.

Notably, not all cities qualify for funding. Only the 36 US cities with more than 500,000 residents -- or New York City through Sacramento -- are eligible for a portion of their state’s dollars. Not surprisingly, this part of the bill isn’t sitting well with mayors of small and mid-sized cities. Philadelphia, of course, is the only city in Pennsylvania with more than 500,000 residents. No one is expecting that we will receive the full 45% city allocation of $2.234 billion, but at the moment it is impossible to gauge what Philadelphia will get. We'll be keeping our eyes open for any indication from Mayor Kenney as to his request to Treasury, and from Gov. Wolf as to what he expects Philadelphia to receive.

Although CARES stimulus funds for state and local government use are not exclusively general fund dollars, governments have been provided significant flexibility with respect to the biggest pot of money coming their way: COVID-expense funds, which include Fiscal Stabilization dollars.

Of the total $339.8 billion in state and local allocations, $274 billion is dedicated to flexible spending by states and cities for COVID response efforts and COVID-related expenses; those expenditures are appropriately very broadly defined. And critically, that funding tranche also includes a $150 billion Fiscal Stabilization Fund, which provides direct aid to help governments pay for essential services and make payroll, as many may become at risk of running out of cash.

Additionally, some of the funding directed toward these governments is earmarked for specific uses. We know how the overall budget is broken down for those uses; those line items are listed in the Total Allocation column below. In an effort to determine what Pennsylvania might receive, we've used the state's share of the overall state allocation to determine the pro-rata portion of each line item.

Finally, we’ve taken this one step further to imagine what Philadelphia could conceivably receive if there were a per capita allocation. These localized projections are both highly speculative, but they provide a framework for what our state and local governments could hope to get.

For more news and updates on how the COVID-19 crisis and response will impact state and local government, the 2020 elections, and Philadelphia's economy, sign up for our weekly newsletter