Will Trumpism Still Be Ascendant in PA's 2022 Elections? 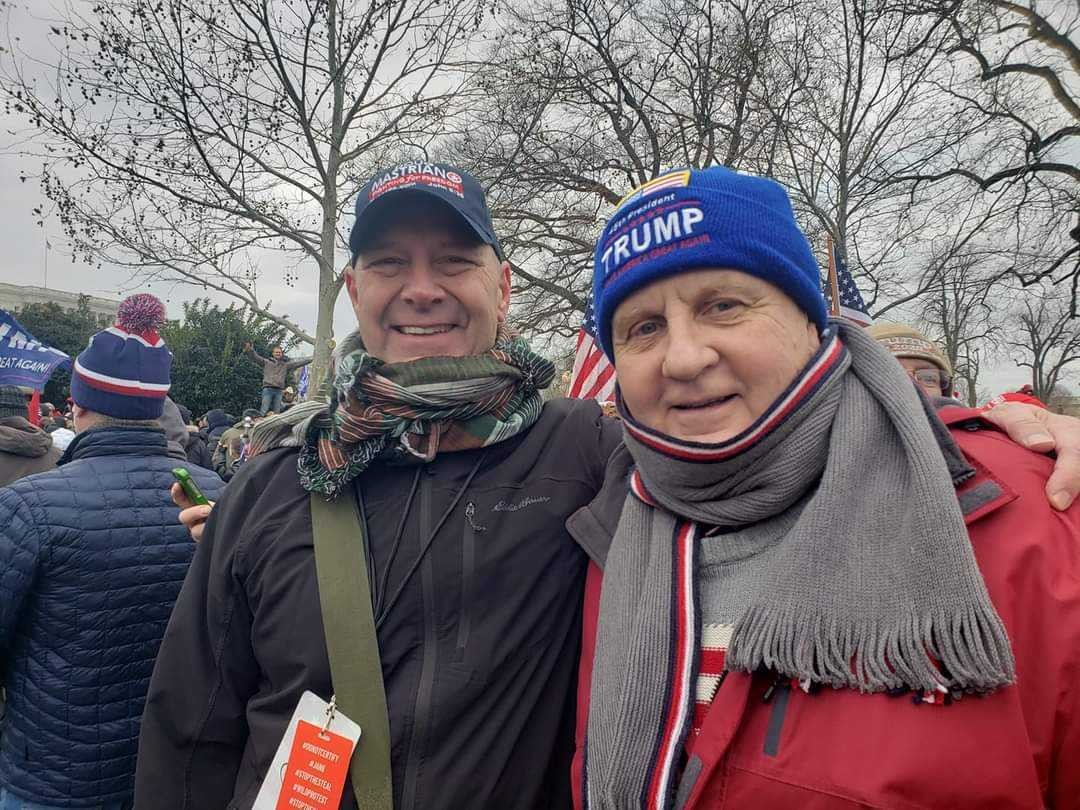 As America grapples with the frightening attempted insurrection in Washington this week which left 5 people dead, there are grave concerns about the dynamics that brought us to this point, and the extent to which Republican politics will continue on this same trajectory after Donald Trump exits the Oval Office.

Unfortunately, many of the important signs suggest that it will, as key foundations of Republican Party politics have been significantly reshaped in Trump’s image, and this will be difficult to undo quickly.

For most years since 2016, there’s been one all-consuming issue that has reoriented almost everything in American politics around itself, and that issue is support or opposition to Donald Trump. The coronavirus pandemic changed the conversation in March by stepping into a similar all-consuming role, but even there, many of the high-profile debates over the public health response have taken on a Trumpy valence, with opinions about masks, indoor business reopenings, or the severity of the coronavirus crisis, standing in as a proxy for Trump support.

Donald Trump has created an entire alternate information ecosystem with its own internal facts and logic that all Republican Party officials now must operate within, or else face the wrath of their voting base, which trusts Trump more than any other Republican politician, public figure, or institution, including conservative media. Fox News, after initially trying to sink Trump in the 2016 primary, turned on a dime after he won to rebrand itself as a Trump propaganda network.

Read the New York Times profile of Philadelphia’s Republican City Commissioner Al Schmidt for a taste of the kinds of threats and harassment that Schmidt received for simply telling the truth about Philadelphia’s election security, and not playing along with the false narrative being spread by the rest of his party.

Schmidt has since leaned into the earnest truth-teller role that’s made him a pariah with the Trumpier elements of his party, but which has also earned him a lot of crossover respect from many Pennsylvania Democrats, and some chatter about a possible run for higher office in the future.

Other Philadelphia Republican officials haven’t had the guts to stand with Schmidt, or say much of anything at all either to defend the integrity of the election, or to denounce this week’s attempted insurrection. Here’s Philadelphia Councilmember David Oh with the world’s meekest denunciation of no one in particular. 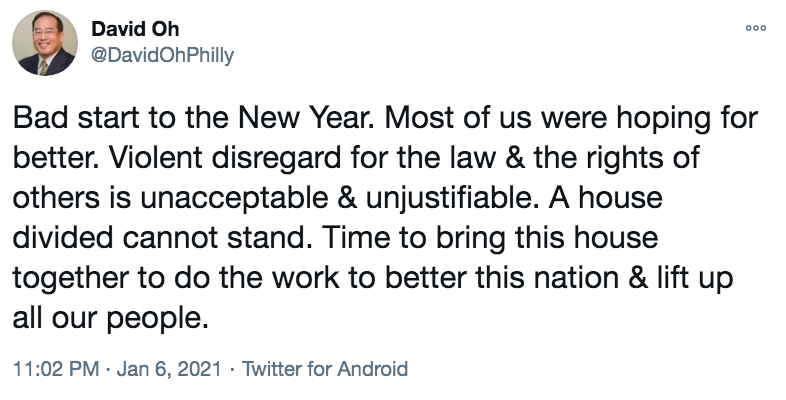 The situation in Pennsylvania’s Congressional delegation is even worse, with only 1 out of 9 PA Republican Reps voting to certify the results of the Presidential election, with the rest voting against it—even after witnessing the violent break-in to the Capitol building. In total, 138 Republicans voted against certifying the results, which is almost 70% of the caucus. 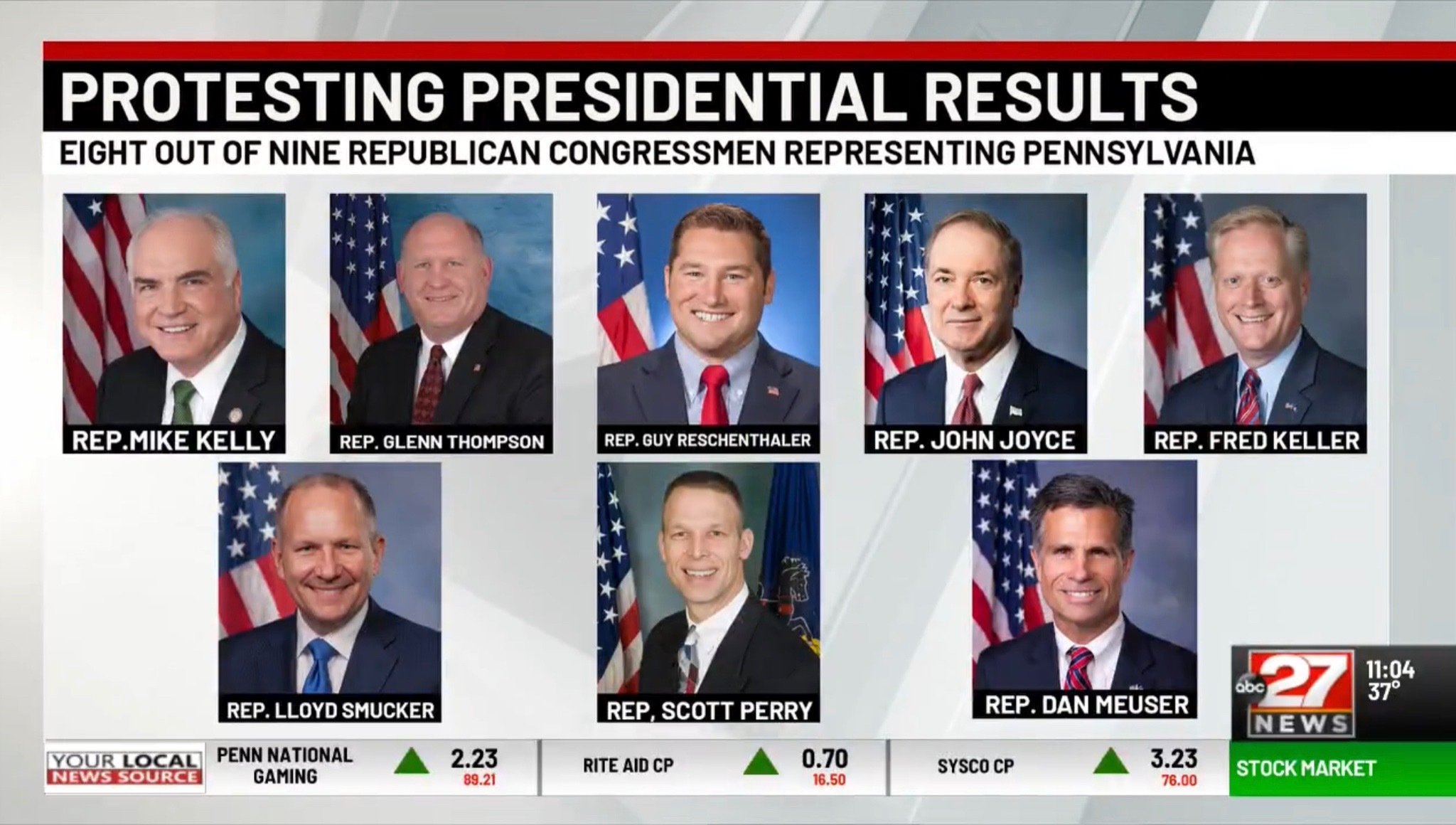 Pennsylvania’s Presidential contest was not close. Joe Biden won with over 80,000 votes, and this was the same election that won each of these Reps their own seats. But the near-lockstep vote based on a lie widely believed by their base voters says a lot about who Republican elected officials feel most accountable to right now.

And there’s no good reason to believe that will naturally change back, given the fact of uncompetitive gerrymandered districts, and the reality that most PA Congressional Reps—Democrat and Republican—are more at risk of losing a primary to a more extreme same-party challenger than they are of losing a general election. 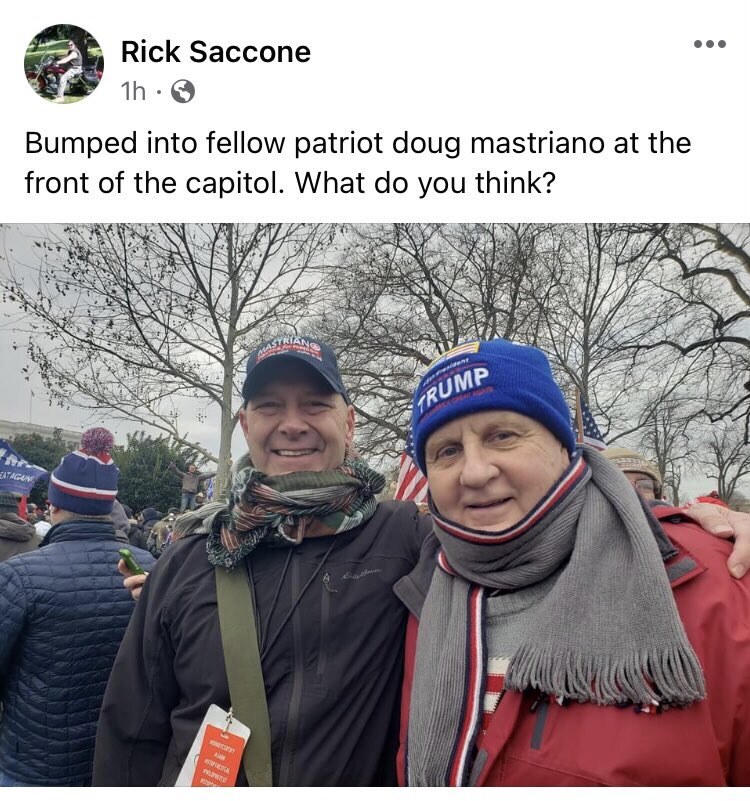 Looking ahead to the next major state and federal elections in 2022, where Pennsylvania will hold high-profile statewide primaries for Governor and Senate to replace outgoing Governor Tom Wolf and Senator Pat Toomey, there’s a real risk that a first-rate kook like Senator Doug Mastriano of Adams County—one of the most prominent voter fraud conspiracists during the election who was last seen in the crowd of rebels storming the Capitol this week—could capture the nomination in the Republican primary for Governor. Midterms typically see a swing against the incumbent President’s party, so the risk is especially palpable.

According to early polling from YouGov, about 45% of Republicans approve of the storming of the Capitol building, so it’s not clear that Mastriano’s presence at the event will be a total liability, especially in a wide open field where the winner will likely need only a plurality of support to win. It may be more likely to be a net asset for his campaign. 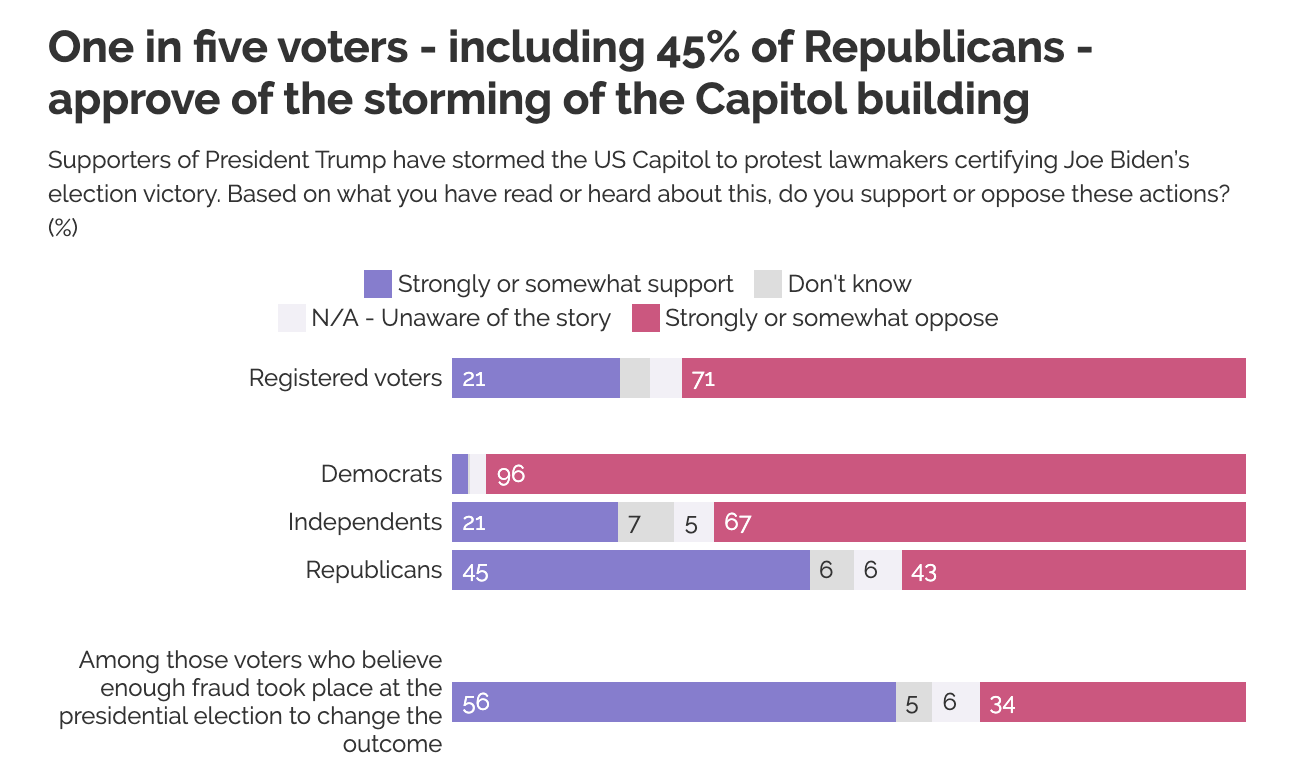 A lot can happen in two years, but the Pennsylvania Republican electorate has undergone some fundamental changes nationally that, when mapped onto Pennsylvania political geography, seem likely to frustrate attempts at repositioning.

For one, college-educated suburban voters who used to make up an important part of the Republican base in the suburbs have increasingly been voting Democratic. We’ve seen this play out over the last few municipal election cycles as the southeastern counties outside of Philadelphia have all elected Democratic majorities to county government for the first time in modern history.

At the same time, western PA has become more Republican, and increasingly so during the Trump years, as national politics has become more polarized along educational attainment lines. In 2016 and 2020 the Trump campaign managed to drive historically high rural voter turnout in Pennsylvania and other states, and one big open question is whether future Republican statewide candidates will be able to inspire similarly heightened levels of rural turnout without Donald Trump on the ballot. Notably, rural turnout fell off significantly in the Georgia run-off elections without Trump on the ballot.

The PA Republican Party has some viable prospects to choose from in 2022 who could potentially perform well with the college-educated suburban voters who have been trending away from them, including people like Dan Hilferty, former CEO of Independence Blue Cross, former Lt. Governor Jim Cawley, former Governor candidate and current Operation Warp Speed deputy Paul Mango, or even Philadelphia’s own Al Schmidt. The big question is whether anybody like that could make it out of a primary alive in the Trump-ified Republican Party, since the kinds of things candidates have to do to excite the “missing white voters” in rural areas who powered Trump’s electoral strength are exactly the kinds of things that tend to repel the college-educated suburban voters the party needs to win back in order to reposition in the direction of sanity.

As active participants in Democratic politics, we aren't the target audience for any of this, but it matters to us all the same, because this week we caught a glimpse of what a collapsing Republican Party could look like, and it turns out the potential for collateral damage to America’s political institutions is enormous, with our state government much less prepared to deal with the fallout.

Sign up for our weekly email newsletter for news, analysis, and action alerts about Philadelphia and Pennsylvania politics and policy