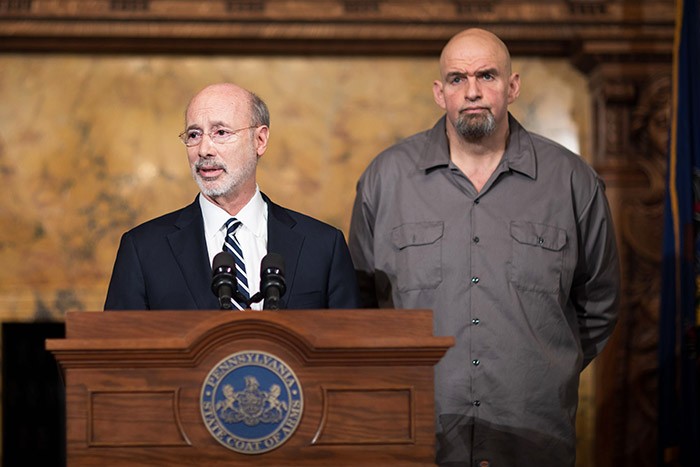 Governor Tom Wolf and Republican legislative leaders reached an agreement Wednesday to move Pennsylvania's primary election to June 2nd, Jan Murphy reports, along with some other measures designed to ease election administration and increase the convenience of voting during the pandemic.

The measure not only changes the primary date but includes other election-related changes, including allowing polling places to be consolidated. It also permits polls to be located in places that serve alcoholic beverages provided voting not take place in the same room where those beverages are served. And it allows county elections officials to begin processing mail-in and absentee ballots at 7 a.m. on Election Day.

Act 77 established a new no-excuse vote-by-mail system, but it still required county election officials to wait until 8 p.m. on Election Day to begin processing the vote-by-mail ballots, which would mean days of delay in tabulating election results. Allowing officials to begin processing them starting on the morning of Election Day should save time.

The consolidation of polling places is something that will need to be monitored going forward, as it could lead to problematic overcrowding from both a public health and election administration standpoint. At the same time, the temporary permission for bars to be used as polling places in place of some of the usual staples like schools and senior centers could help provide alternatives in some cases.

The bill doesn't appear to come with any real downsides from the standpoint of voting access, and it also makes some underrated changes that could be expected to expand voter participation. Most notably, it fixes a few problems with the recently-passed Act 77 by allowing mail ballots to be "spoiled" at the polls in the November general election (meaning you aren't locked into voting by mail just because you apply for a mail ballot), and by allowing people to register to vote and cast a mail ballot in the same sitting. It's important to note that voters who request a mail-in ballot for the primary will have to use it. Those who show up to vote at the polls with their mail-in ballot will need to vote by provisional ballot.

Currently there are a few days of buffer between when a person submits a voter registration form and when they're eligible to cast a mail-in vote. Going forward, you'll be registered in minutes, and then can request and turn in a mail-in ballot in the same trip.

Unfortunately, there's been no further movement on HB 2637, the vote-by-mail bill from Rep. Kevin Boyle that would send every PA voter a vote-by-mail ballot application.

There's been an ongoing debate playing out where on one side, elected officials say we should simply encourage voters to vote by mail under the state's new program, and at the other end of the spectrum, people say we should require an all-mail election. There's an in-between option though, where we do a mostly-mail election and provide at least some in-person voting capabilities at a few places in each ward.

One important point about Rep. Boyle's bill, HB 2637, is that it doesn't require an all-mail election, it just sends every eligible voter a ballot application in the mail. The application would have pre-paid postage, so the process would just involve filling the application out, mailing it back, getting a ballot in the mail, filling it out and sending it back. Under Act 77, county election officials are allowed to create in-person drop-off points at satellite locations in neighborhoods too, so at least in theory, providing more drop-off points for mail ballots could be one way of fulfilling some of those in-person needs while minimizing opportunities to spread infection.

This Wednesday, PA Senate Majority Leader Jake Corman told reporters "we're not gonna do that" with regard to an all-mail election, but state officials could still change their tune about that as the pandemic spreads over the next couple weeks. At the very least, as an interim step state lawmakers should embrace HB 2637 and send everyone a vote-by-mail ballot application.

There's been a lot of momentum building behind this idea nationally, and $400 million in funding for it was even included in the federal economic recovery package passed this week.

County election officials have sounded the alarm about their ability to administer an all-mail election, and that's understandable given that it's the first run in Pennsylvania. But it's unclear that this would be more difficult than the alternative of a mostly in-person election if we aren't cutting corners on the public health precautions.

The hard check on county election officials' ability to carry out an in-person election continues to be the availability of election day workers and ability to use many of the current polling places. Many polling places are located at schools, senior centers, and other locations that could be off-limits in the pandemic, and by June 2nd it could be even harder to find polling locations and election workers.

It seems clear that whatever the real limitations of a mostly-mail election are, they're going to be much easier to troubleshoot than the problems of a mass in-person election under these circumstances. State lawmakers are going to have to go further than they want to right now, but the least they can do at this point is send every registered voter a vote-by-mail ballot.

Sign and share this petition to state lawmakers to help raise awareness of this issue, and get HB 2637 passed in time to make a difference for the June 2nd election.