Three Winners and Three Losers from the 2020 Primary

The final vote counts are in and the wild ride that was the 2020 primary has finally come to an end. Despite the lack of a competitive primary at the Presidential level by the time the race hit Pennsylvania, this year featured multiple interesting races for state legislature that ended with voters sending several new faces to join Philadelphia’s delegation to Harrisburg next year, should they prevail in the general election.

Let’s take a look at some of the highlights with three losers and three winners from the 2020 primary.

Out of the 5 state House incumbents who faced a competitive primary, 3 lost their seats: Reps. Maria Donatucci in the 185th District, Jim Roebuck in the 188th District, Roni Green in the 190th District. Roni Green’s loss to Amen Brown is the least surprising of the three as she was elected through a special election to replace Movita Johnson-Harrell, who was also elected through a special election. This was the first election where Green ran in a multi-way primary, and lost to Brown, who had sought the seat as an independent in the special election before switching back to the Democratic Party.

Roebuck’s loss is a significant development that, while not entirely surprising, does speak to the changing and more left-leaning electorate in the gentrifying areas of eastern-most West Philadelphia, which also voted overwhelmingly for Jamie Gauthier in the 2019 primary for the 3rd City Council District. The 188th District is the part of the 3rd District that went for Gauthier at 75% or higher in some cases, so it was tailor-made for a challenger like Rick Krajewski, despite Jim Roebuck by many accounts being generally better-regarded there than former Councilmember Jannie Blackwell.

The most surprising loss of the election was Rep. Maria Donatucci, a fixture in South Philadelphia Democratic politics who lost to a political newcomer, Regina Young, by 12 points. Young received no press coverage and spent around $10,000 on the race.

Mary Isaacson (175th) and Brian Sims (182nd) both fended off challenges, Isaacson in a 4-way race with Vanessa McGrath, Jeff Dempsey, and Andre Del Valle, and Sims in a head-to-head with Marisa Shabaan. The in-person results shocked everyone when Sims, who enjoyed a massive advantage in name recognition and fundraising, ended Election Day down to Shabaan by less than 200 machine votes. As the mail-in ballots came in, though, Sims’ lead grew to 15 points. In the 175th District, Isaacson received 37% of the vote, with the other 63% of the vote going to a candidate besides the incumbent. McGrath won around 30%, Dempsey received 21%, and Del Valle got 12%.

The other very interesting primary to watch this time, partly because of how close it was throughout the entire count, was in the 198th District, where Rosita Youngblood’s staffer Darisha Parker won a four-way primary with just 273 votes between her and the next-closest candidate, Bernard Williams. Parker ended the in-person vote in last place, but slowly crept up as the mail ballots were counted, but the entire race there was never more than a 300-point difference between the candidates.

The Donatucci family has been a mainstay of South Philadelphia politics in the Girard Estates section since the 70’s, and if you asked anybody knowledgeable about Philadelphia politics two years ago if a primary campaign against either then-Register of Wills Ron Donatucci or Rep. Maria Donatucci was likely to be successful, nobody would have dreamed to bet against them.

Fast-forward to 2020, and it turns out that it took less than $13,000 combined to beat both incumbent Donatuccis in back to back cycles. Then-candidate Tracey Gordon raised around $2,000 for her citywide Register of Wills campaign, beating Ron Donatucci by nearly 7,000 votes in the 2019 primary (a crazy bargain at less than 3 cents per vote!) And representative-elect Regina Young spent only $9,757 for her successful grassroots primary campaign against Rep. Maria Donatucci, whose family controlled the seat since 1978, by 1,269 votes.

The 185th District is about 50% Black, and contains a mix of very white divisions in Girard Estates in the 26th ward (many over 95% white) and a large section of the 40th ward in Southwest Philadelphia, where many of the divisions are over 75% Black, so it’s very segregated and there was always a chance under the current district lines that a compelling Black candidate could make a competitive race out of it. Regina Young by her account ran a good campaign and did a lot of phone banking and outreach that gave her some very big margins in the 40th ward for a solid 12-point win.

The Ward persuasion game (in some places)

With so many more people voting by mail this year, and likely in the future as well with around three-quarters of mail voters opting to be put onto PA’s “permanent” (aka annual) vote-by-mail list, an election-swaying number of voters are going to be deciding who to vote for sometime prior to Election Day in most cases. The more that trend progresses, the less effective one stalwart election persuasion strategy is likely to become: The practice of passing out sample ballots on election day at the polling places by committee people and campaign volunteers.

That’s not to say it won’t be effective at all—in a great many neighborhoods the majority of votes were still cast in-person despite the pandemic and the mail option. 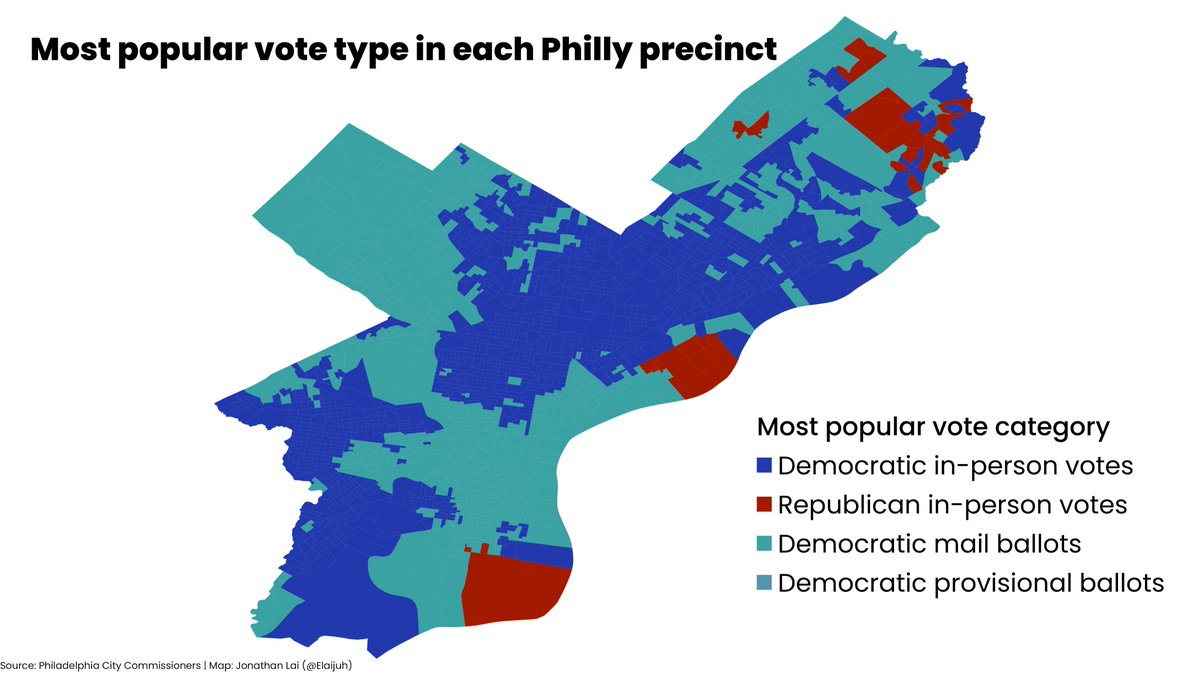 But as vote-by-mail continues to catch on and the permanent mail-voting share of the electorate grows, the more effective persuasion is going to have to take place in the weeks and months leading up to election day rather than right in front of the polls. The campaigns that excel at building programs to take advantage of these new early voting capabilities are increasingly the ones that will thrive in the future.

Left-wing candidates had a couple of big primary wins in 2020 with the election of two Reclaim Philadelphia leaders, Nikil Saval in State Senate District 1, and Rick Krajewski in the 188th House District.

There were also no challengers for freshman Reps Elizabeth Fiedler or Joe Hohenstein this time around, who Reclaim had supported in 2018. There had been some initial action around a possible challenge to Rep. Fiedler by people aligned with the 39th Ward leaders, but that fizzled out and she ran unopposed.

The cycle wasn’t entirely a clean sweep for left candidates. Roni Green, an SEIU member who was endorsed by SEIU and Councilmember Jamie Gauthier, lost her reelection bid in the 190th District to Amen Brown, and Bernard Williams, endorsed by Center for Popular Democracy and Kendra Brooks, came in second in the 198th District, won by Darisha Parker. Andre Del Valle, who was endorsed by PA Working Families, came in a distant fourth in the 175th District after jumping into the race at the last minute, and winning just a high enough percentage of the vote to block another progressive challenger, Vanessa McGrath, from winning.

Anecdotally, the Saval and Krajewski campaigns seemed much more able to thrive in the corona-times, with the Saval campaign claiming 500 volunteers as part of their phone and text-banking operation, and a pivot throughout the spring by the Krajewski campaign to an impressive mutual-aid program that brought them into contact with a lot of voters to provide direct services.

Both candidates ran with some of the more popular messages that progressive movement campaigns have been using nationally about the Green New Deal and a Homes Guarantee, and both were running in areas with some of the faster-gentrifying, highly-education pockets of voters that are most favorable to these kinds of messages.

This isn’t meant to diminish leftist candidates’ wins in any way, but it’s significant that one of the things powering progressives’ wins is the emergence of the wards covering Center City, University City, and the neighborhoods ringing these areas as reliably high-turnout wards in every election.

These wards have a lot of high-educational-attainment voters, and the phenomenon where they’ve been consistently delivering high turnout even in off years is a relatively new feature of the post-2016 era. Some of this high turnout can be ascribed to the 2018 ward elections as well, which saw over a third of the local Democratic Party seats turn over, and some newer more active progressive-aligned committee people get elected in the wards ringing Center City and University City, upper South Philly on the east side, and parts of the Northwest (dubbed the “liberal wards” by Dem Chair Bob Brady.) This consistent high turnout continues to produce interesting effects in down ballot races with an electorate that’s much more receptive to a change message.

Governor Tom Wolf’s 2019 deal with Republicans to trade the end of straight-ticket voting for a vote-by-mail and early voting system looks better and better in light of the pandemic, as it set the stage for an unusually fast-for-Pennsylvania pivot to scaling up for mass mail voting.

In Philadelphia, 348,740 people voted in the primary, and 175,176—or 50%—of them voted by mail, and 173,564 voted in person either on machines, or provisionally. So mail was able to pick up fully half of the votes, taking pressure off of the heavily-consolidated in-person polling places. 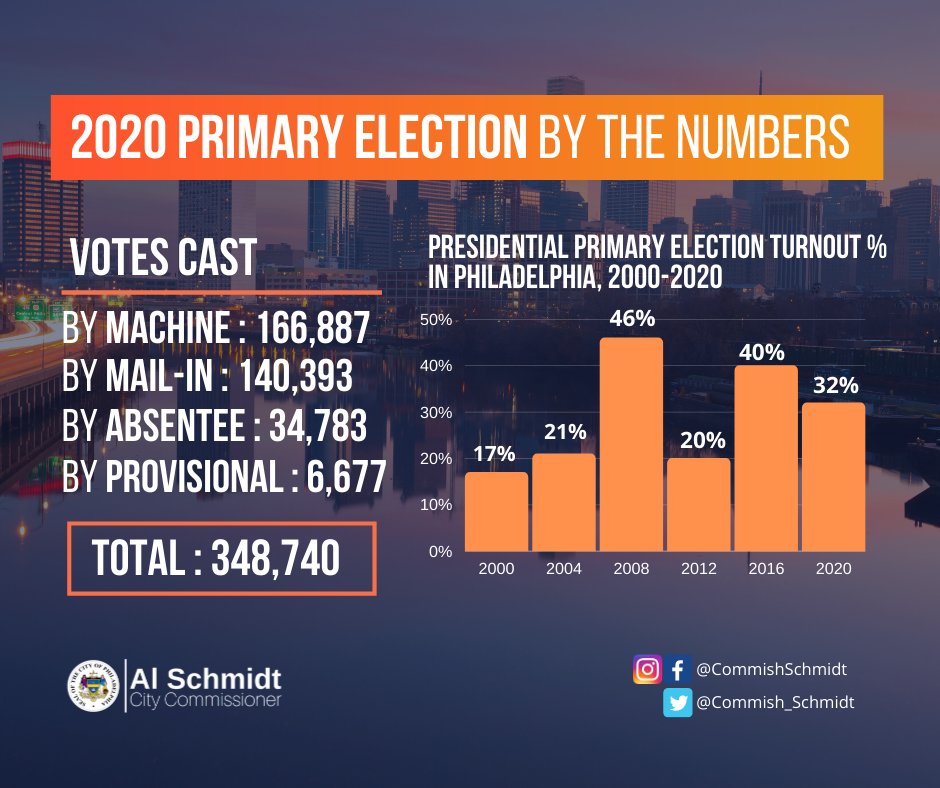 It wasn’t pretty, but the process basically worked overall, and the parts that didn’t work have also been laid bare, with plenty of time as of today for the state legislature to address them. There are also some important challenges with increasing participation rates among Black voters, who had the lowest rate of mail-voting of anybody. There are definitely some trust issues to work through, but also ones that can be solved by increasing access, such as by sending everyone a mail-in ballot application, or increasing the number of early voting centers in neighborhoods—a feature allowed by Act 77 that didn’t debut in the primary, but is in the works for November. 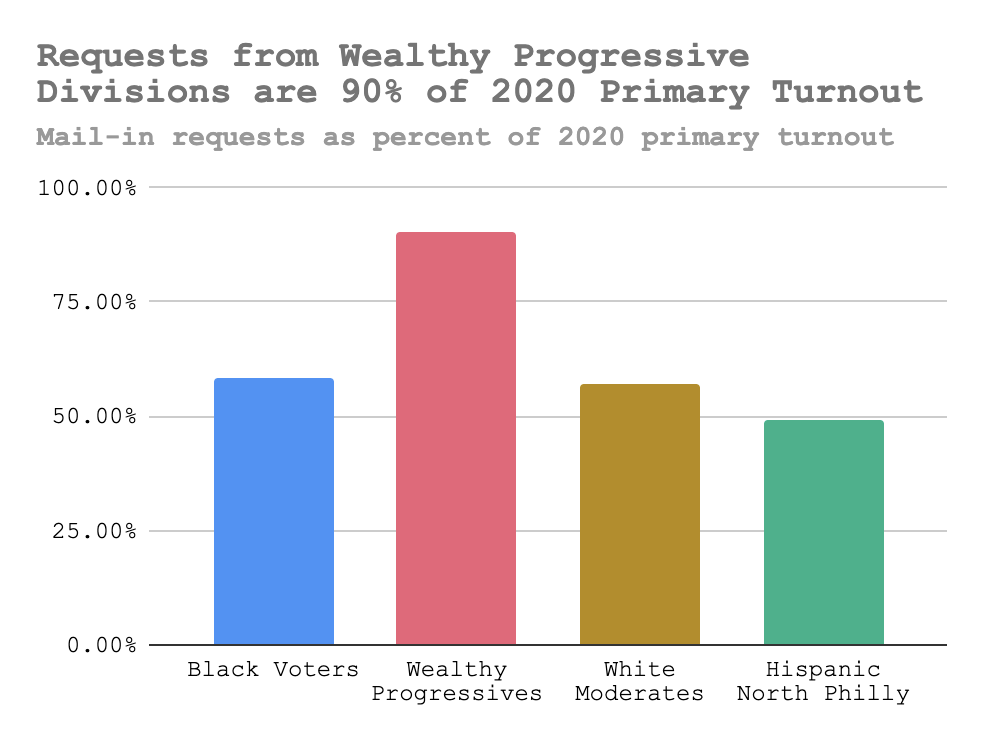 Many more people are expected to vote in the November election, so there’s some real urgency to work out the issues that slow down this process. The best response once again is to lean into our new alternative voting options under Act 77 like early mail voting stations, dropboxes, and more, that diminish the importance of voting on one day, in one place, at one time, and flatten the voting curve over the 50-day early mail-voting period before Election Day.