The framework is still largely intact in Pennsylvania in 2017. The most visible part of it is the state-owned system of Wine and Spirits stores (PA is one of just two states to ban private liquor sales, in the good company of Utah) but there's a whole slew of other policies too.

There's a population-based cap on liquor licenses, all kinds of special rules micromanaging what the various types of alcohol manufacturers and retailers are allowed to sell, a whole suite of different taxes, and an ethically-fraught regime where the Liquor Control Board that regulates alcohol sales is also the main wholesale buyer and seller of alcohol.

These policies range from merely annoying to economically destructive, but all of them are weird, and Gifford Pinchot was inarguably successful at making it stupidly inconvenient to shop for adult beverages in Pennsylvania.  What's fascinating is that voters have put up with all of this for so long--a state of affairs largely owing to an ingenius political economy that Pinchot created where each of the policies has a built-in political constituency: state store unions for the Wine and Spirits stores; liquor license owners for the license cap; beer distributors for the bizarre retailing rules.

But while the Pinchot system is unquestionably good at enriching a few small but vocal political constituencies, what's less clear is whether it's any good at reducing excessive drinking, drunk driving, underage drinking, or any of the other public problems associated with alcohol.

Defenders of Pennsylvania's retrograde liquor laws don't typically lead with the amazing rent-seeking opportunities it provides to certain groups; they prefer to use a more politically sympathetic message about public health benefits instead. The problem is that the purported public health benefits of the Pinchot system don't really seem to exist.

Pennsylvania notoriously mollycoddles drunk drivers, and gets low ranks compared to other states for drunk driving prevention. The Commonwealth ranks 9th out of the 50 states for underage alcohol consumption.

This map from Wonkblog based on the most recent Health and Human Services data on drinking habits drives the point home most powerfully. Just look at Pennsylvania in relation to the open market states around it. People in PA drink more than nearby states where you can buy a bottle of whiskey at a regular store. 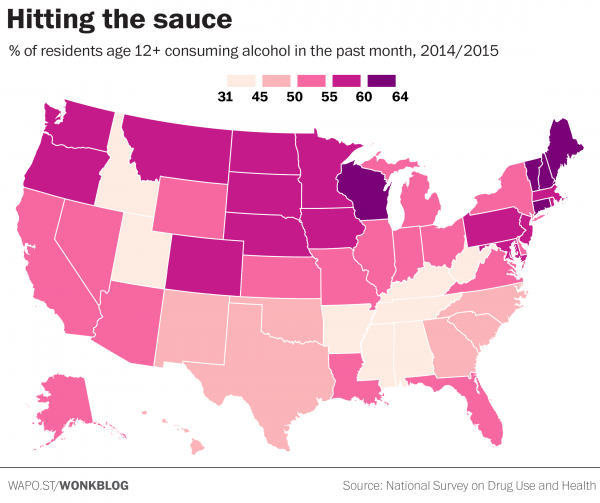 While some might argue that these trends would be even worse if Pennsylvania had a more open market for alcohol, the more persuasive explanation is that Pennsylvania's framework for regulating alcohol is doing a bad job of discouraging excessive drinking because it actually isn't designed to discourage excessive drinking. It's designed to reduce competition between alcohol sellers, and is effective at this, but throwing up a bunch of anti-competitive seller side rules turns out not to produce any observable public health benefits.

This matters, since without the public health rationale, supporters of the status quo are left with the unpersuasive argument that voters should continue to tolerate these arbitrary inconveniences solely to protect small groups of vested interests and industry incumbents.