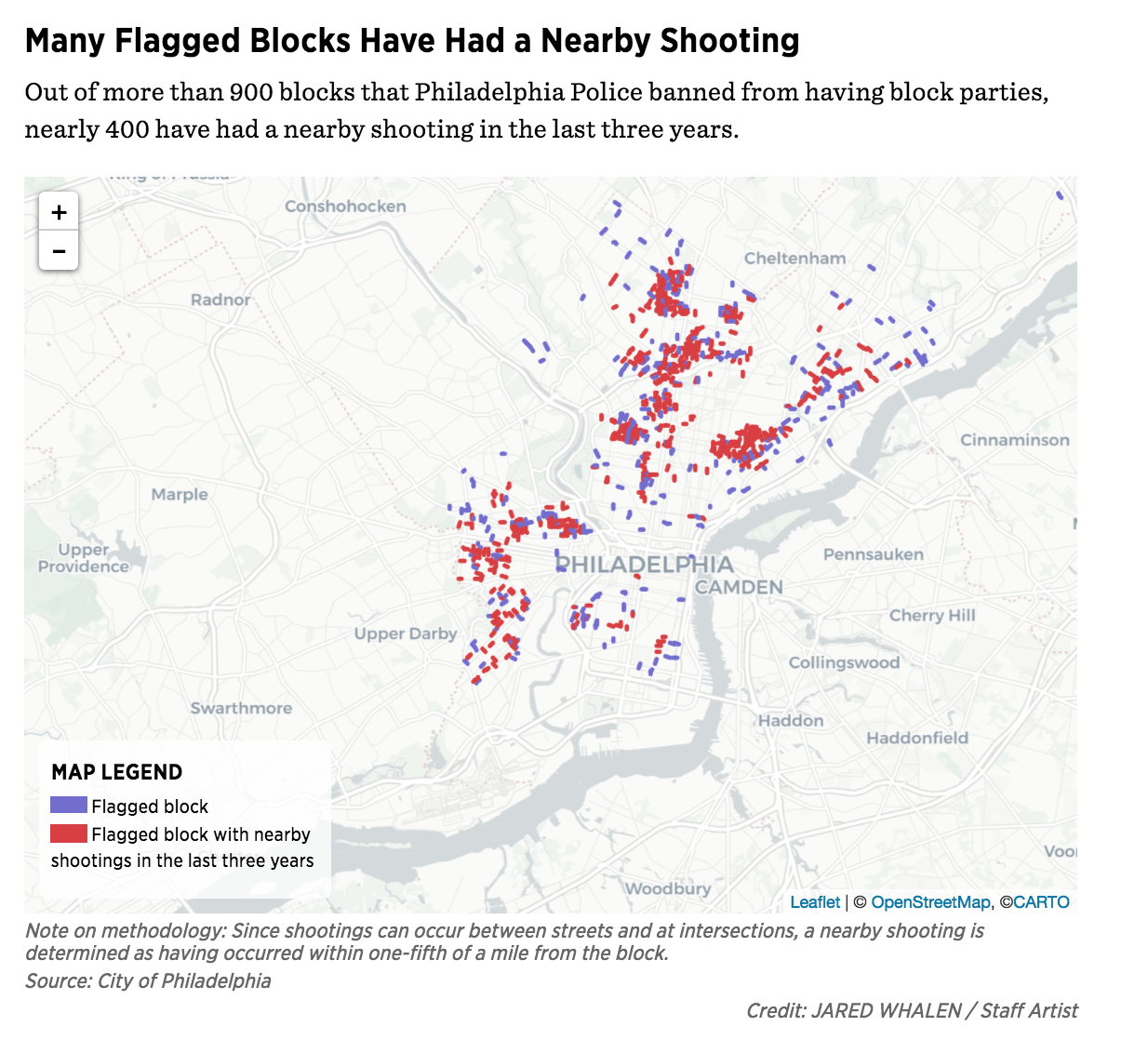 (More than half of banned blocks haven't had a shooting | Image: Jared Whalen / Philadelphia Inquirer)

Following up on the controversy over the City's new block party rules, Julia Terruso reports that the City has banned 922 blocks from hosting block parties, and only about 400 of those blocks were banned as a result of nearby shootings in the past three years. What accounts for the rest?

Neighbors on those blocks may have broken some other city rules in the past, or there may be "traffic concerns"—a vague catch-all that seems ripe for abuse. Terruso reports there are "no set police guidelines for how to rule on a request" so the reason could be anything.

"The remaining blocks could be on the list due to other criminal activity or traffic concerns. Some blocks on the list are being punished for failing to shut down parties on time, usually by 8:30 p.m., or for breaking other city rules. The infamous dumpster-pool block party, for instance, landed that Kensington block on the list, said Pat O’Donnell, who heads the city’s right-of-way unit.

The city says a new policy — requiring residents to get permission up front from their local police district  — will make the process more transparent and provide more prompt answers for residents. It could also help residents on those flagged blocks work with police to have a party anyway or to get off the list, said Capt. Sekou Kinebrew, who heads the public affairs unit. There are no set police guidelines for how to rule on a request."

The problem with having no approval guidelines is that Police could deny block party requests for all kinds of meritless reasons, and then back-fill in a reason like "traffic."

On Twitter, West Philly resident Amara Rockar pointed out that some Police Districts are imposing blanket denials for block parties for entire Districts, for questionable reasons. Residents in the 12th Police District in Southwest Philadelphia are running a Change.org petition protesting the district-wide Police ban on block parties there as collective punishment for the actions of a few people. She also linked to other citizen reports of blanket party bans in the 39th (East Falls) and 35th District (Broad and Olney.) Making the Police the first stop in the process could make blanket bans more common and harder to contest.

Why does this issue matter? As I said to Terruso in the article, the thing that really powers Philly's block party culture is the extremely easy and cheap application process. You have one form, you get 30 or so signatures, you pay $25 and turn it in to one point-of-contact, and you're done. Creating additional steps in the process, even if they are easy steps, is going to deter more people from doing it, and a bit less bureaucratic coordination hassle on the City's side isn't worth that larger cost.

Do you live on a block that you think is unfairly on the ban list, or have you had a street closure permit denied for a reason you disagreed with? Sign and share the petition to help keep this issue in the news. Share your stories with us in the comments or at [email protected], and we'll help shine a light on them here on our blog.