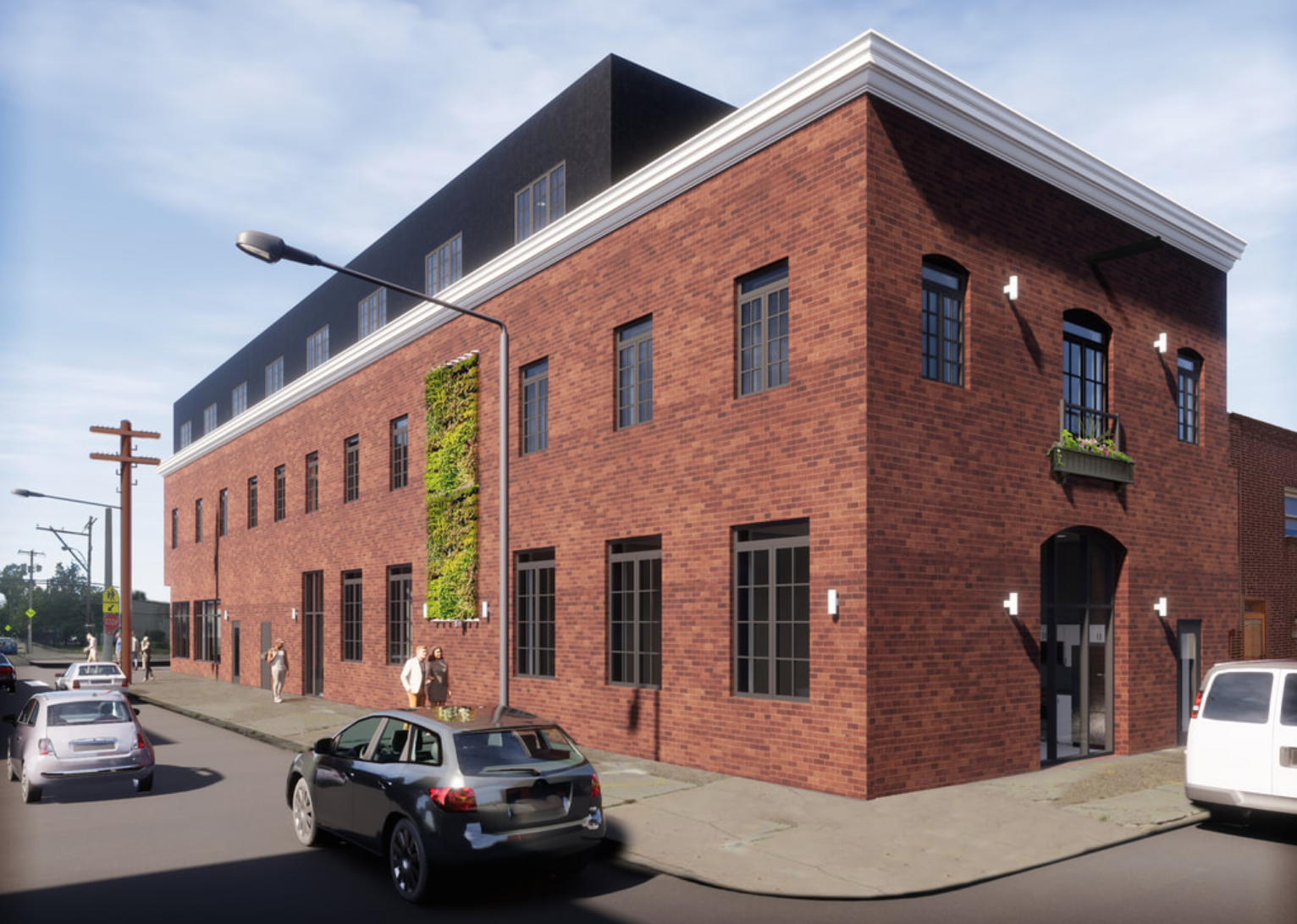 The Basic Systems Repair program lives within Philadelphia’s Housing Trust Fund, which also funds other housing safety net programs and affordable housing construction and preservation. Even with the new expected state funds, the scale of the need throughout Philadelphia is high enough that there’ll never really be a day when officials can afford to be more complacent about finding additional funding for the HTF.

A recent charter change passed by the voters last fall will create a new floor for HTF funding, at 1% of the city’s budget, but simply setting a floor doesn’t means the HTF's coffers will be flush.

The good news is that back in 2018, Philadelphia City Council came up with a pretty good idea for raising money for the HTF to fund Basic Systems Repair and other affordable housing initiatives, by giving builders the option to pay a fee into the Fund to access more building height, or add more housing units to a project.

The bad news is that, allegedly at the behest of the Kenney adminisration and the Philadelphia City Planning Commission, Council later chose to make that program work less well back in 2021, to the point where it produces both less housing and less Housing Trust Fund money than it did prior to those changes. Now that the City is in need of even more Basic Systems Repair funding to make the most of the Whole-Home Repair bill, Councilmembers should consider rolling back some of the 2021 amendments, and making other changes aimed at leveling up both the amount of money and the amount of housing it produces.

The Mixed Income Housing program, spearheaded by 7th District Councilmember Maria Quinones-Sanchez, was originally conceived as a souped-up version of the city’s existing inclusionary zoning bonus, and became pretty well-usedduring the period where it was operating at full force, and raised a lot more money than Council originally estimated. Prior to the 2018 changes, the density bonus didn’t provide a lot of value and was rarely used, but the 2018 changes made it powerful enough to become popular.

The gist was that, by either including below-market rate units inside the building, or paying a fee to the Housing Trust Fund in-lieu of building below-market units, builders could get some relief from some (mostly misguided) zoning restrictions on the height and density of the building.

The in-lieu fee option proved to be more popular for a few reasons, most importantly because it was simpler and more predictable to use. But it was also because City Council loaded up the on-site unit option with so many regulations, including a 50-year deed restriction, where the cumulative impact was to make it mostly unuseable.

Unfortunately, the Planning Commission and some Councilmembers interpreted the wide divergence in the popularity of the in-lieu fee vs. the on-site option as a sign that they had made the in-lieu fee too inexpensive, rather than as a sign the on-site regulations weren’t workable, or that the on-site density bonus was too stingy. There was an opportunity to fix this in a way that would produce more total affordable housing, but instead they chose to change it in a way that would produce less.

The main changes were to alter the way the in-lieu fee was assessed, in a way that made it much more expensive to use, and to also ban the use of the in-lieu fee in projects with 10 or fewer units.

That last part was always quizzical, since it is really the larger multi-family buildings that would have an easier time financing the on-site units, whereas smaller-scale apartment buildings would have a much harder time making that work. But Council chose to maintain the in-lieu fee option for the larger projects, while banning it for the smaller ones. Cynically, that amendment read as a sop to the Not-In-My-Back-Yard politics of certain homeowner groups, some of whom were up in arms over how well the program was working, and sought to carve their neighborhoods out.

Of all the changes that City Council might make to the Mixed-Income Housing program to raise more Basic Systems Repair funding, one of the better ideas would be to bring back the in-lieu fee option for projects of 10 housing units or fewer.

While a few larger buildings contributed the bulk of the revenue raised under MIH in its short-lived heyday, the City also saw a steady stream of payments from smaller projects that they now aren’t getting. And having the in-lieu option available for smaller projects also did some useful work to resolve small-ball issues with the zoning code without involving the Zoning Board of Adjustment.

A building now under construction near Columbus Square Park in Passyunk Square was able to utilize the MIH program and pay a small fee to add two more units to a 10-unit adaptive reuse project that, if not for the program, would likely have led to a trip to the Zoning Board of Adjustment for a variance request. Instead of paying the City a few thousand dollars, they would have paid a few thousand dollars to a zoning attorney instead, for the same result. And the project would have taken longer, clogged up the civic association and the ZBA’s meeting calendars for no good reason, and would have entailed more political uncertainty if neighbors decided to fight the variance.

More recently, Kyle McShane at the Rising Real Estate blog wrote about a 45-unit project on the edge of Fishtown where a builder is going to pay the city $450,000 just to add 15 more units to the building—which they probably could’ve just gotten the Zoning Board of Adjustment to grant them, without making the $450,000 payment to the city. 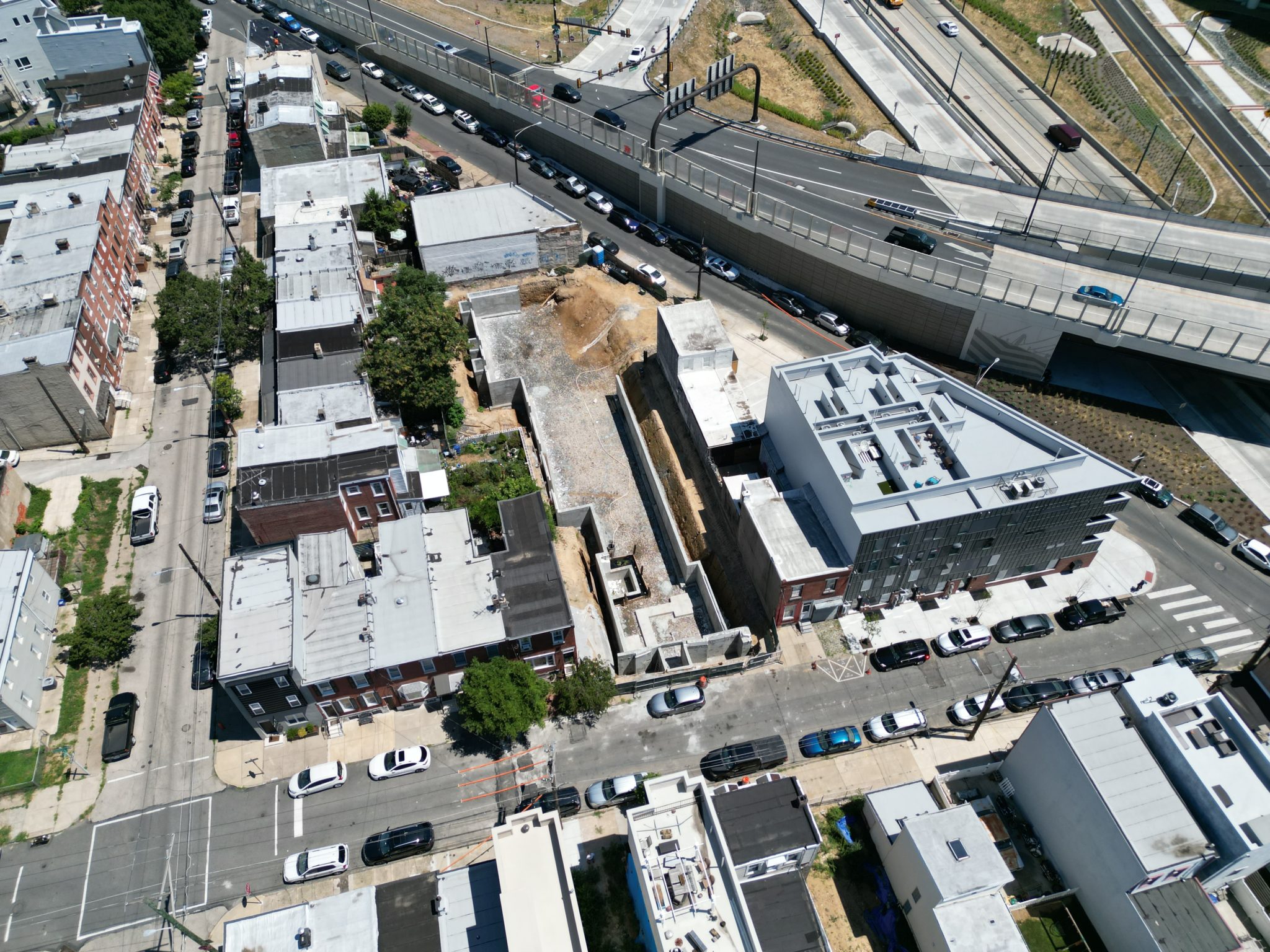 Foundation work is currently underway on a 4-story, 45 foot tall, 45,921 square foot building that will have 45 residential units and 15 bicycle stalls when complete. There is also a commercial space included in the current plans, but the development team is going to the ZBA in a couple of months to try to turn that space into 2 more residential units. We must say, we think the residential units are more of a logical use in this location that is off the beaten path and a couple of blocks off the Girard Avenue commercial corridor. We’re always big proponents of commercial space in new buildings, but not so much here.

The project is utilizing the green roof bonus for an additional 6 units and the low income housing bonus for an extra 15 units. In exchange for the 15 units, the development team is contributing $450,000 to the housing trust fund. We must say, this is a huge win for all parties involved. 15 more homes will be built in one of the most desirable neighborhoods in Philadelphia and nearly a half million dollars will be available to build and upkeep affordable homes in the city. What a great outcome.

This is objectively a better outcome for everybody than the applicant paying a zoning lawyer to access the same zoning relief.

Totally apart from the need for more affordable housing funding, the ability to just pay the city to add more homes to a project instead of rolling the dice at the Zoning Board serves a useful purpose that is good for city housing policy outcomes.

While there may be some reluctance to admit this is what’s happening, we already have a system where, if you are willing to pay a lot of money and be persistent, you can get zoning relief more often than not. It’s just that none of that money is going to the City of Philadelphia, and is instead lining the pockets of a whole industry of lawyers and consultants. City Council, in all its wisdom, has made some things about the zoning code genuinely unworkable for builders, and oftentimes there arise some small-ball issues that could be quickly and easily resolved if there was an option to pay a fee and get relief from them more quickly than the variance process allows for.

Inflation dynamics make this even more attractive as a proposition since the costs of building materials have been going up quite a bit, and a housing project that pencils out under today’s prices may turn out not to pencil out 7 months from now. With zoning variances taking 6 months to a year to acquire in many cases, that long of a timeline can be a dealbreaker resulting in permitted housing not ultimately being built ultimately.

It’s worth quickly addressing one of the main talking points from detractors of the Mixed-Income Housing program, which is that the Kenney administration has not appropriated the exact quantity of fee money raised under the MIH program to the Housing Trust Fund, and has funded the HTF at lower levels than are warranted by the payments.

One thing to understand about this is that the Philadelphia City Charter does not allow for dedicated revenue sources in general—a fact that the soda tax opponents had previously used to try and sow doubt about whether the soda tax would actually fund pre-Kindergarten programming and improvements to parks and Rec centers. The administration depriving the HTF of the full quantity of MIH payments is legitimately frustrating on the merits, and also because of how it has soured some Councilmembers on the program, in addition to handing a potent talking point to activists and elected officials who oppose the program’s goals on a more basic level, or the in-lieu fee option more specifically.

Another Mayor, seeing that this program is succeeding at raising more funding than originally anticipated, might have chosen to fortify its poliical success by faithfully appropriating the exact amount of fee revenue raised and marketing the success stories as MIH program success stories, similar to what the administration does with Rebuild project marketing.

There is a little blame to go around for everyone who contributed to making the Mixed-Income Housing program less successful than in its previous iteration from a few years ago, but the good news is that it’s still easy to turn things around by adding back the in-lieu fee option for under-10-unit buildings, and for the administration to faithfully and transparently appropriate the fee revenue to the Housing Trust Fund and programs like Basic Systems Repair as City Council originally intended.