Why Philly's Housing Affordability Problem is Really an Income Problem 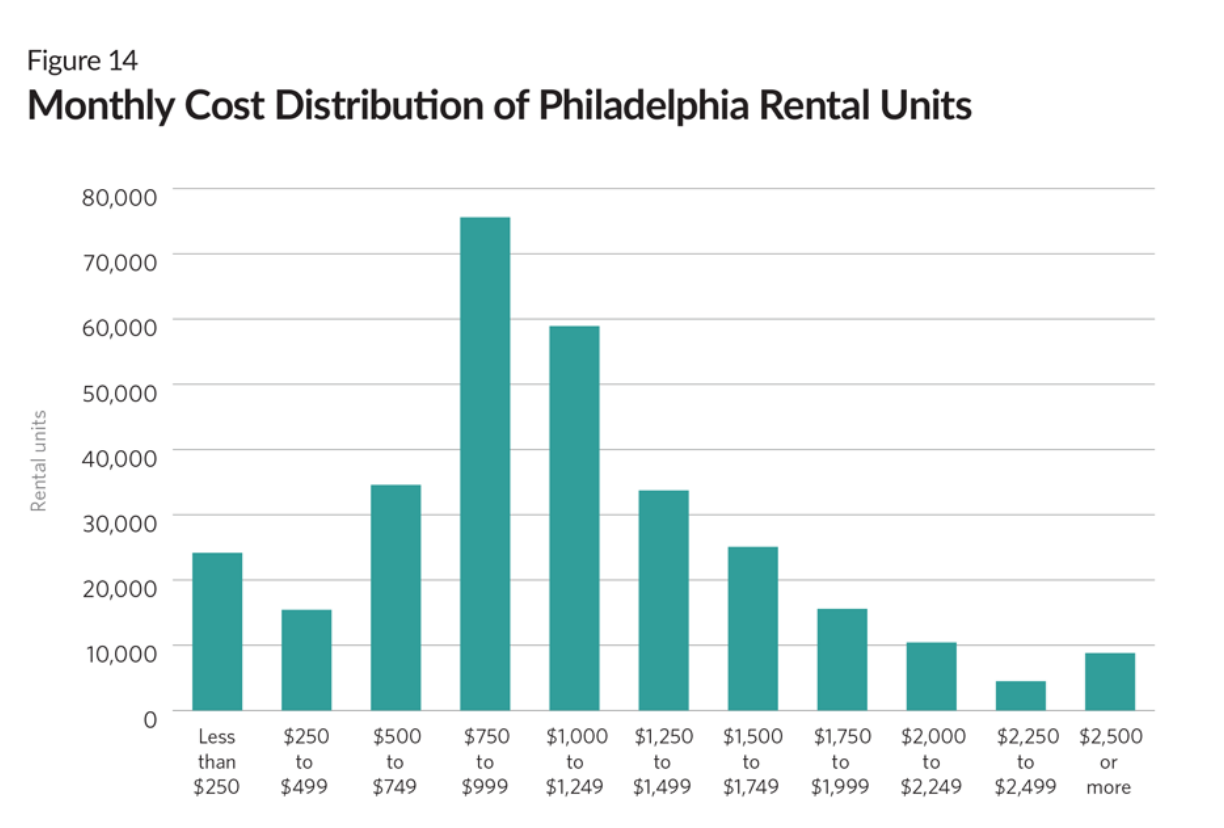 Philadelphia’s housing affordability challenges are substantially different from those in places like New York City and the Bay Area, according to some clarifying new research from Pew showing Philadelphia’s issues stem much more from the high poverty rate and percentage of people with very low incomes, as opposed to runaway housing price inflation.

Pew researchers broke down the data in a few different ways to show the percentage of households who are housing cost-burdened (defined as spending over 30% of their income on housing) within different income brackets and found that only in the under-$30,000 bracket are a majority of households housing-cost-burdened.

The problem is particularly acute for renters with incomes below $30,000 per year; 88% of them are cost-burdened, with 68% severely cost-burdened, meaning they spend at least 50% of their income on housing. The city’s supply of low-cost units is inadequate to meet the needs of this large group of households—there are nearly twice as many low-income renter households as housing units they can afford.”

Fifty-four percent of the city’s renters are cost-burdened—compared with 28% of homeowners—and renters are making up an increasing share of Philadelphia’s housing market. Of the growth in occupied housing units in the city since 2009, three-quarters were rentals. 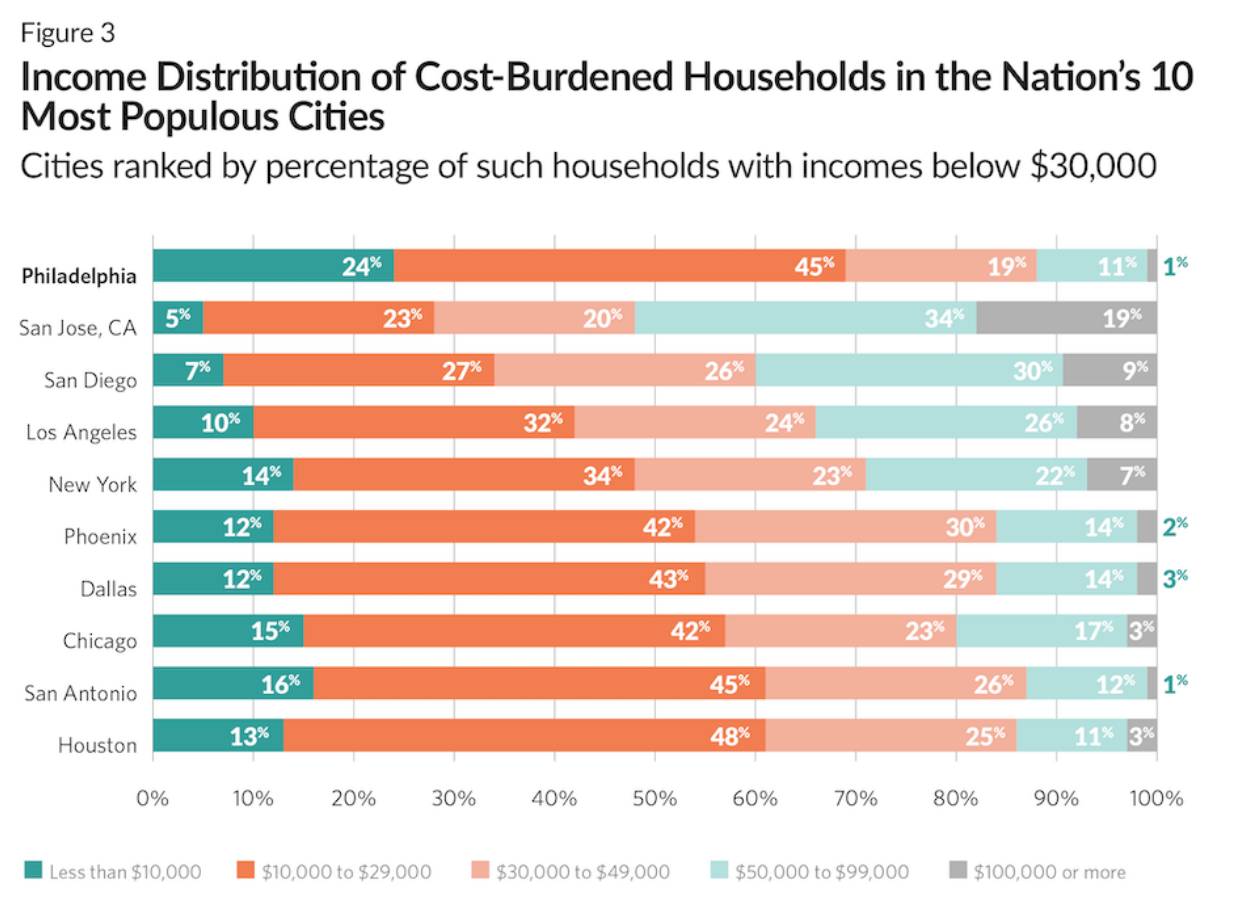 Households (not just individuals) making less than $30,000 a year are facing greater affordable housing problems because they’re having a hard time affording everything, and one of the best things we could do to fix this is to start giving them more money. Interventions like raising the state and federal minimum wage, or universalizing Housing Choice vouchers at the federal level could help solve a lot of what are currently considered affordable housing problems in Philadelphia, since if everybody had the money to afford at least an apartment in the $750-1,250 range, most people would agree we’d be doing very well at housing everyone affordably.

At the same time, if we gave everybody who’s currently cost-burdened enough money to be able to afford a $1,200-a-month home, but didn’t simultaneously increase the number of homes available in the city, we’d quickly find that many of those homes would inflate in price well outside of the affordable range. This is why any affordable housing agenda in Philadelphia with any hope of succeeding has to combine income subsidies to cost-burdened residents, and particularly renters, with pro-housing production policies to encourage a growing supply of housing at different price levels, and a vacancy rate on the high side to keep housing costs from rising very fast.

One of the more positive findings in the Pew report that really underscores the difference between conditions in Philadelphia and the real cost-crisis cities is that lots of people who have the means to afford more expensive housing are nonetheless able to live in lower-cost housing than they could conceivably afford. 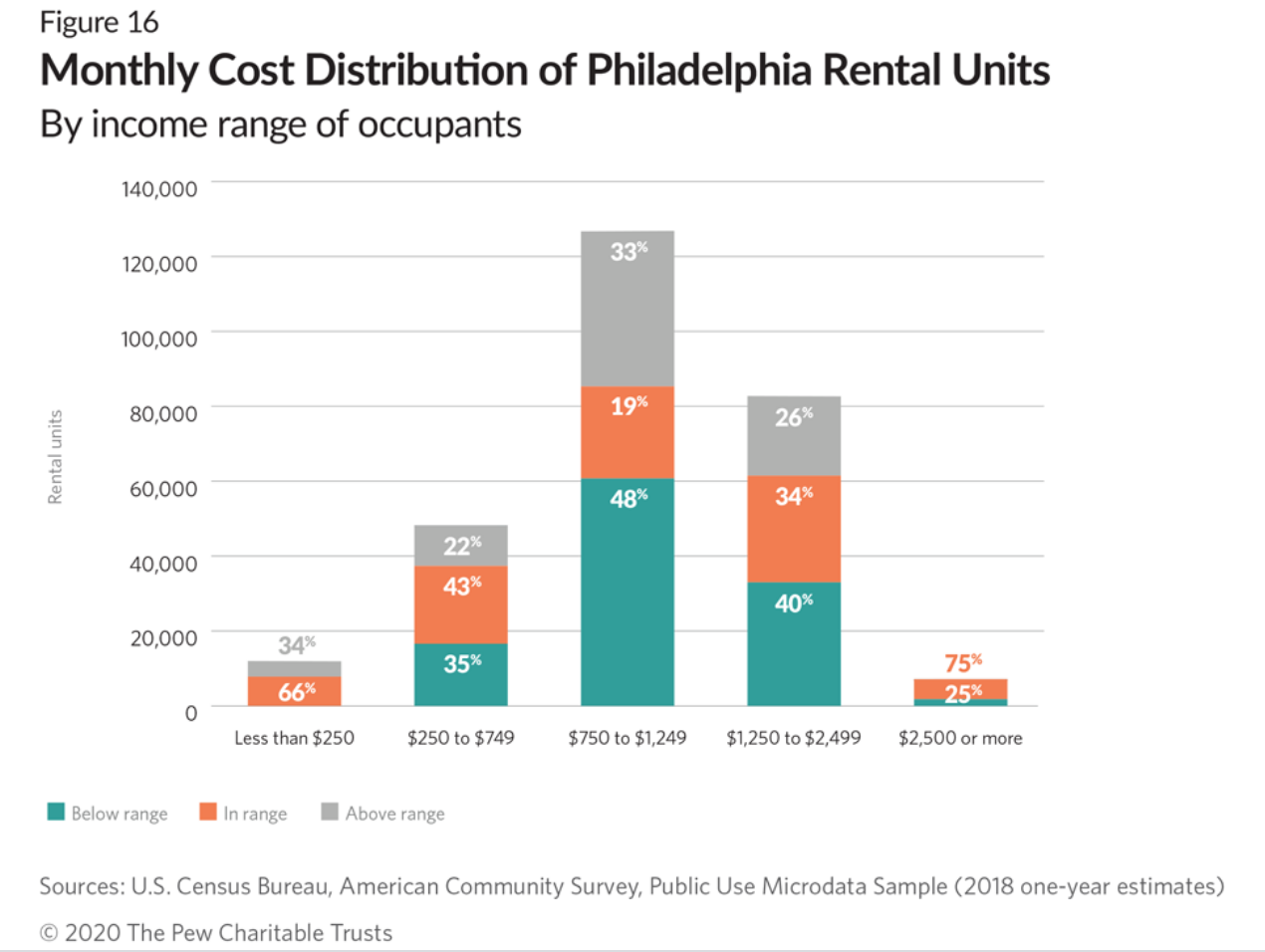 Unlike in the Bay Area, where everybody is more or less pushed into the most expensive possible housing their income can cover, in Philadelphia a significant percentage of the population still has the option of turning down more expensive housing that they could afford, but choose not to. That is the quality of life that it is important to maintain and expand to a greater share of Philadelphians, and it’s time to get serious about it because changes like state or federal minimum wage increases or universal Housing Choice vouchers are fully within the realm of possibility in 2021, depending on how the elections for President and the Pennsylvania state legislature go this November, and many more residents could soon have the money in hand to afford more middle-income housing.

Stay in the know about this issue by signing up for our weekly email newsletter, featuring news, analysis, and opportunities for action