Is the State House in Play for PA Dems? This Model Says It Could Be 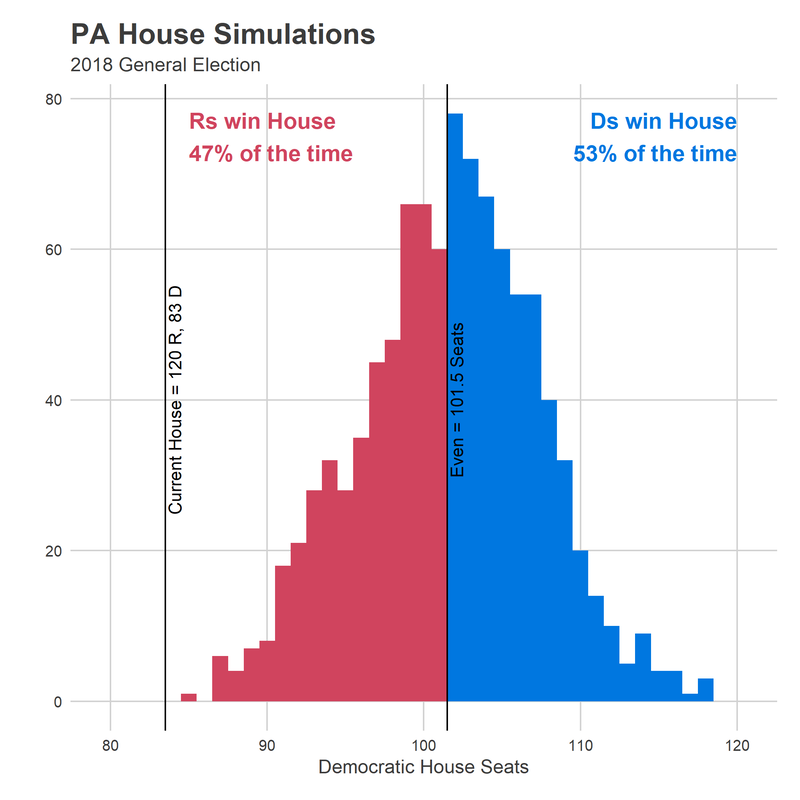 Jonathan Tannen at the Sixty Six Wards blog unveiled new prediction models for the PA state House and Senate races, and the House model is interesting for its bullishness on Democrats' chances of flipping the lower chamber. It gives them a little better than even odds.

Read the whole post to learn more about what went into building the models, but the big takeaway is that Democrats win the House in about 53% of scenarios, and Republicans win it in about 47% of scenarios.

"I predict that in two weeks the Democrats will between 92 and 110 seats. On average in my simulations, they win 101.5 seats, which is annoyingly, bizarrely, exactly half of 203. They win the majority 53% of the time. "

This is surprisingly bullish for Democrats. The average represents an 18.5 seat pickup for them, and even the low end of the confidence interval--92 seats--would be a 9 seat pickup.

My predictions are particularly optimistic on the Philadelphia area’s Democratic challengers, largely because of the sweeping victories expected in the region's Congressional races. Remember: the model doesn’t know anything about the state candidates themselves, and just uses broad indications of the district and the environment, so your knowledge of a given candidate could mean very different predictions. It gives Democrat Kristin Seale a 32% chance of unseating Quinn in Delco’s 168. It gives Hohenstein a 34% chance of winning the River Wards’ 177, now that John Taylor isn’t in the picture. And it gives Michael Doyle a 36% chance of Martina White in 170 in the Northeast."

Why is the model so bullish? It has to do with the specific way in which Republicans gerrymandered the state legislative districts after the last Census. An effective gerrymander doesn't make every single seat a slam dunk for one party. In order to skew a lot of seats in one direction, you need to draw most of them so that the partisan lean moderately favors one side, but the slant is still large enough to be durable in a typical election year.

What's happening here is that 2018 is not a typical election year, and most observers seem to agree this will be a wave year for the Democrats, particularly in the Philadelphia suburbs. In an environment like that, a map like this only provides the dominant party with a limited defense, as Tannen explains.

"How can Republicans be favored in more seats than is my upper bound on how many they'll win? The answer is gerrymandering. Because of "cracking and packing", there are a ton of districts that are safely Republican in any typical year, but not so safe as to waste too many votes. A Blue Wave would push them just to the boundary. Any additional randomness--a good Democratic candidate, a local story--pushes them over to Democrat seats. This is also helped by the fact that Democrats are contesting more districts than ever before. And there just aren't any similarly teetering seats on the Democratic side. So while the model isn't sure which of the close seats will swing over the line, it's sure that some will. And maybe enough to win Democrats the house."

Tannen commented on Twitter that any type of noise or uncertainty in the model could easily move things in one direction or the other, and that's exactly the type of situation where a strong door-knocking game on one side or the other could tip the balance in and decide control of the chamber. To see which districts fall into that category, check out our rundown of the final battleground districts just a short SEPTA train ride away from Philadelphia.