How Can the City Make Life Easier for RCOs? 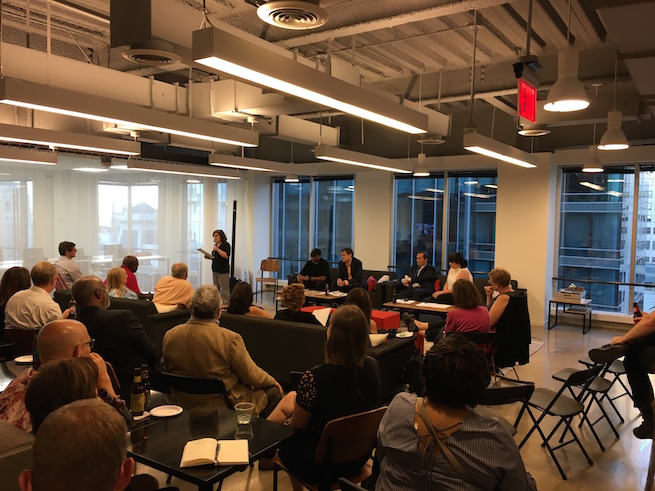 Five years ago, Philly created the Registered Community Organization (RCO) system as the official channel for citizens to be involved in the zoning and land development process.

Earlier this week, Philadelphia 3.0 and the Crosstown Coalition hosted a discussion to hear from the people who participate in that process—neighborhood advocates, developers, and zoning reformers—to learn more about how that system is holding up half a decade later. Participants included moderator Karen Black, with Matt Karp (zoning chair of Fishtown Neighbors Association), Courtney Voss (Chief of Staff to Councilmember Bobby Henon), and Rich DeMarco (Lauletta Birnbaum, Zoning Code Commission member), and Bernard Gorham (Richard Allen New Generation RCO.)

The prevailing view, generally, seems to be that things are working a bit better—especially having a formal process for learning about and reviewing zoning variance requests—but that the process is still frustrating everyone on all sides. Courtney Voss from Councilman Henon's office said debates about RCO regulations have been some of the most heated and stressful in City Council's recent history, right up there with the sugary beverage tax and the proposal to sell PGW.

The discussion covered a lot of ground, but the main issues that people have about the RCO system tended to fall into a few thematic buckets.

The framers of the new zoning code made a choice to work off of existing community organizations, and the territory that everybody had already claimed, rather than create an entirely new network of RCO boards, with something like the Advisory Neighborhood Commissions (ANCs) in Washington, DC. The trade-off with doing it that way is that there are a lot of overlapping neighborhood groups—sometimes over a dozen!—particularly in neighborhoods in South Philly and the Northwest.

The main power of RCOs have is reviewing zoning variance requests, and convening meetings with developers. In places with overlapping groups, the District Councilmember chooses one of the groups to be the Coordinating RCO. The Coordinating RCO is then supposed to coordinate with all the other RCOs to have a joint meeting, since the developer is only required to present at one community meeting.

Sometimes the Coordinating RCO isn't on the level, though, and may choose not to tell the other groups about meetings, effectively shutting them out of the process. The whole thing is rife with political favoritism, but it's not exactly clear how to fix it. One suggestion raised by Bruce Crawley of the Richard Allen New Generation RCO was to create a rotation, rather than leaving it up to the Councilmember.

One subset of this issue is the problem of impermeable groups and one-man bands (sometimes one and the same) that form to do zoning politics, but may have very little legitimacy to speak for the community. In truth, very few RCOs are truly open or representative enough to definitively speak for the whole community they claim, but some try harder at this than others, while others try hard to keep people from joining, and operate more like special interest groups. The Planning Commission has been too skittish about refusing to renew RCO status for groups like this.

City Council made the choice to let political wards be RCOs, which as we've written, has created a very elegant system for shaking down developers in totally corrupt and inappropriate ways. Every RCO is nested in a political ward, and wards are automatically opted into RCO status, despite not having the same (very modest) requirements for openness and accountability that other RCOs have to observe.

This came up recently when Darrell Clarke named the 14th Ward the Coordinating RCO for Post Brothers's Quaker Building project at 9th and Poplar, when Richard Allen New Generation—a more recently-formed RCO—would have been a more appropriate and neutral choice.

Not every ward necessarily takes an interest in zoning, but some do, and they can be pretty adept at getting attention from Councilmembers, given their electioneering activities. Council should cut political wards out of eligibility for RCO status, but so far that idea has had no legs politically.

Zoning Board of Adjustment

There are several flavors of complaints about the Zoning Board of Adjustment.

From the RCO member side, one complaint is that ZBA is still approving variance requests that are locally unpopular, even in cases where there is no true legal hardship, like in the case of front-loading garages. Matt Karp, zoning chair of Fishtown Neighbors Association*, presented some statistics from an analysis he completed showing that even under the strictest ZBA of modern times (the Julia Chapman era), Board members still approved 85% of variances that came before it. In the Kenney era, it's over 90%. Karp is dubious that all of these variances were actual hardships. With the zoning categories supposedly fixed, and more areas of the city updated with fresh zoning maps, we should be seeing a decrease in variance requests. Variance requests dipped in 2013, the first year of the next code, but five years later, they've bounced right back. 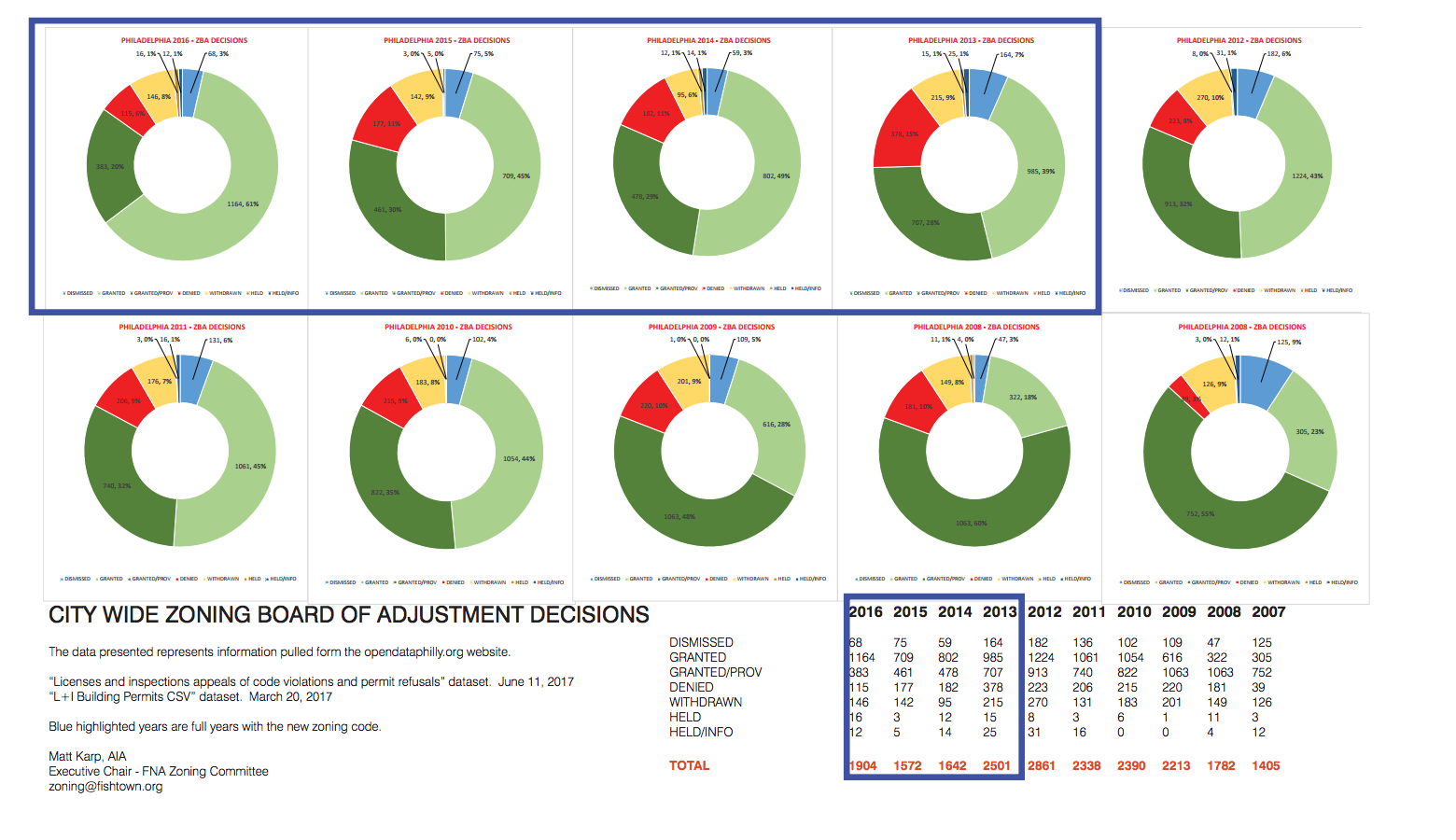 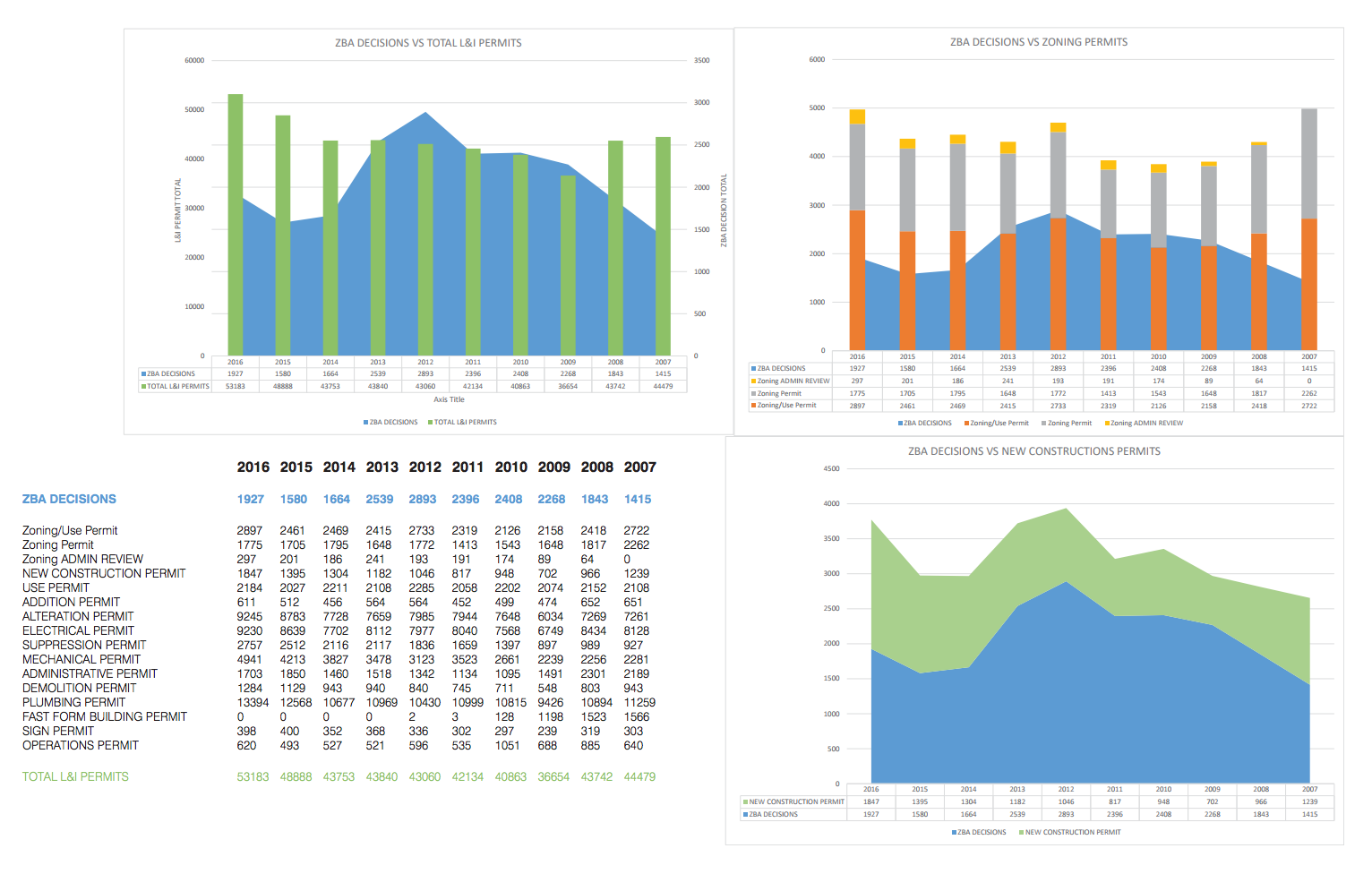 From the developer side, zoning attorney Rich DeMarco pointed out that both the United States Constitution and the Pennsylvania Constitution provide for very strong property rights, and while local zoning powers have been ruled a reasonable limitation on those property rights, there's still a strong presumption under the law that people have a right to use their property as they see fit. These are court cases, not popularity contests.

One problem is that Mayor Kenney has failed to appoint qualified board members to the ZBA who would even know what constitutes a legal hardship. There's one architect on the board, Michael Bryant, and Frank DiCicco and Carol Tinari likely understand zoning very well due to their long practical exposure, but everybody else is a political hack with no subject matter expertise. Truly, how could it be anything other than a popularity contest?

DeMarco noted that one problem with the RCO concept is that the property rights are really decided at the ZBA hearing, not the RCO meeting, and the RCO system encourages people to do politics at the wrong level. People try to pack zoning meetings to influence the ZBA's decisions, when they should be packing the ZBA hearings. That's impractical though, since the ZBA hearings are in the middle of the work day, and the meetings have tended not to run on time. Residents of Society Hill and Rittenhouse may have jobs that let them take two hours in the middle of the day to go to ZBA hearings, but most people don't have that kind of privilege. One audience member suggested having the ZBA start holding zoning hearings in the neighborhoods, perhaps in courtrooms at the local police precincts, at times when people aren't at work.

The Bella Vista Neighbors Association* nearly lost their Directors and Operators insurance coverage recently after they were named in a lawsuit that had nothing to do with their core functions as an organization, but nonetheless appeared to increase the appearance of risk from their insurer's perspective. They ended up finding an insurer at the last minute, but this issue has felled at least one RCO—the Old City Civic Association—before, and there's no reason it won't happen again.

The Crosstown Coalition has been working to get state lawmakers on board with anti-SLAPP (Strategic Lawsuits Against Public Participation) legislation in Harrisburg as one way of addressing the problem, but until that happens, groups are going to be left exposed. Jeff Hornstein, Crosstown's recently-elected President, broke some news that the organization is looking into options fora group insurance plan that could cover all of their member organizations (Crosstown currently represents about 28 different RCOs.)

There is some frustration out there that the city essentially deputizes these citizen volunteer groups as quasi-governmental entities to conduct an activity that puts them at risk of getting sued, but then does nothing to protect them from personal liability. After all, if people do this work without D&O insurance and get sued, their personal property could be on the line.

The City has come a long way toward rationalizing zoning and the public participation component, but judging by the frustration, and the recurring themes that came up in this discussion, City Council still has a lot of work to do.