A new report and mapping project from William Stancil at the University of Minnesota Law School’s Institute of Metropolitan Opportunity presents a novel way of visualizing different types of neighborhood change over two decades in regions across the United States, adding an important new layer of context to the debates over gentrification and displacement. In Philadelphia, the report's findings highlight the extent to which displacement through disinvestment is by far the biggest neighborhood change problem that most neighborhoods are struggling with.

Stancil looked at four different types of neighborhood change at the regional level between the years 2000 and 2016, uncovering two types of expansion and two types of decline. This approach helps shed some light on where people may be concentrating who have been displaced either from economically expanding neighborhoods, or from economically contracting ones. The maps don't attempt to show the flows between specific places, but it's helpful to see which types of changes are happening where as a starting point.

Here's a description of how to read the maps from Tanvi Misra's piece on the report at City Lab:

Based on what he found, he came up with four color-coded categories of neighborhood change, seen in the grid below: The column on the left showcases the two types of economic expansion or gentrification, and the one of the right, the two types of decline.

The report features breakout summaries and statistics for each region. Here's what it has to say about Philadelphia:

The suburbs, by contrast, have mostly experienced forms of economic decline. The low-income population of strongly declining suburban neighborhoods has grown by 48 percent. These areas have also seen white flight, as their white population has fallen by 19 percent, or about 95,000 people. Strong poverty concentration occurred in the eastern suburbs of Delaware County, such as Yeadon, Darby, Milbourne, and East Lansdowne. In other areas, such as Camden and Chester, poverty concentration occurred alongside neighborhood abandonment. 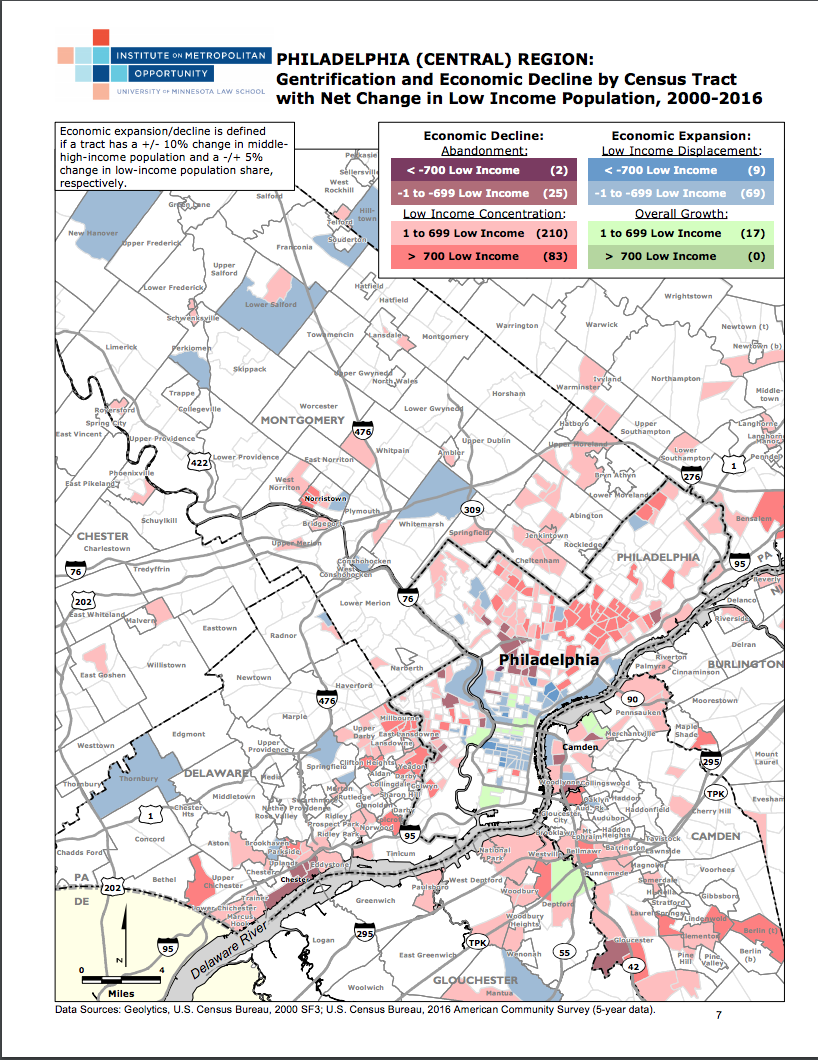 Check out the interactive map to zoom in on different areas and view the statistics for individual Census tracts.

Regionally, the biggest story of the last two decades by far is the concentration of poverty in lower Northeast Philadelphia and the suburbs of Delaware County and southern New Jersey, and the depopulation of large sections of North Philadelphia. Economic expansion in Center City and close-in neighborhoods, with some accompanying displacement of low-income people, and some pockets of intense displacement particularly in western Center City and Graduate Hospital, is another important trend, though in terms of the number of people affected, it's dwarfed by the poverty concentration problem by a factor of five.

To be sure, none of this should minimize the urgency for elected officials to take proactive measures to maintain housing affordability in Philadelphia's expanding neighborhoods. But the report does provide an important recontextualization for some of the media and activist narratives about the nature of the housing and neighborhood change issues Philadelphia is facing, which hopefully will direct more political attention to the places most in need of economic opportunity, and the policies and strategies needed to support them.