City Council is out with a new anti-poverty plan timed to the primary elections that you can think of as a sort of campaign platform for incumbents. There are several good ideas in there, but also some misguided ideas, particularly in the affordable housing plank, which unfortunately just reinforce an unhelpful narrative about housing that we were just starting to get away from with Council's much better affordable housing package that passed last Fall.

There's a better cost-free way to raise more Housing Trust Fund money than the "linkage fees" they propose, and one that's a win-win for everybody. And the boring reality is that it just involves scaling up the Mixed-Income Housing program that Council already passed using strategic rezonings to make thate program available in more neighborhoods.

Earlier this Fall, Council and Mayor Kenney were trying to come to an agreement on raising between $70 million and $100 million over five years for the Housing Trust Fund. Council President Darrell Clarke and several members of Council wanted to pass a new construction tax to raise most of the money, but in the end, a deal was struck to commit more general fund money to the Housing Trust Fund from the proceeds of expiring 10-year tax abatements.

They also passed Councilmember Maria Quinones-Sanchez's Mixed-Income Housing bill, which successfully revamped the zoning density bonus for below-market rate units to be more useable, and provided a promising new framework for the future of housing politics. Since that passed, there have already been three sizable projects that used the bonus.

Jake Blumgart reports that in the Mayor's new budget draft, Mayor Kenney has actually proposed putting $80.4 million of general fund revenue into the Housing Trust Fund over 5 years, instead of the agreed-upon $53 million, because revenue from expiring abatements came in higher than expected. That, combined with the $18 million from expected Mixed-Income Housing bonus money, gets pretty close to the $100 million amount that Council President Clarke said he wanted to raise.

"In September, the Kenney administration defeated a construction tax proposed by City Council President Darrell Clarke by offering $53 million from the general fund to support affordable housing.  The administration pegged the amount they would provide for housing to the amount of new revenue generated by properties that were coming off the 10-year property tax abatement, a controversial tax break that the city uses to spur new development.

But the administration is now saying that the amount the city is receiving from properties coming off the abatement is higher than previously estimated, and so, instead they will be devoting $80.4 million over five years to affordable housing. (Council President Clarke has vowed to get them to round it up to an even $100 million.)"

But because we're so far off from having the volume of below-market-rate housing units available that Philadelphia needs to serve the tens of thousands of people on the waiting list, there will probably never come a day when elected officials or housing advocates are going to be satisfied with what we're spending on the Housing Trust Fund. So assuming that the $100 million target won't suffice, where should any additional money come from, and who should pay?

The answers to those questions are nowhere, and no one. The best way to create more Housing Trust Fund revenue continues to be to print it out of thin air by making the new Mixed-Income Housing bonus widely useable in all neighborhoods, especially already-gentrifying neighborhoods, and ones in the path of growth.

Density bonuses are the best way to create new money for housing because they don't cost anything to taxpayers or builders—instead, they create brand new development rights from nothing, and capture some of the value from this to direct toward below-market rate housing. It's a win-win. There's no risk of any negative impact on new housing creation, as would be the case with a construction tax, and if it turns out to be really popular, it could raise a ton of money. A thematically similar pay-for-density program in Chicago called the Neighborhood Opportunity Fund is on track to raise over $200 million just three years after its creation.

Unfortunately, some on Council are still committed to a dead-end, zero-sum politics around this issue rather than embracing the politics of abundance. That's the biggest problem with the so-called 'linkage fee' in the new plan, which is really just the construction tax proposal all over again, and which we don't even know would raise very much money. The misguided premise is that new market-rate housing actually causes an increased need for affordable housing by depleting the supply of more affordable housing. Here's how they describe it:

Linkage fees, also known as development impact fees, attempt to compensate for the negative impact of development on housing prices by charging a fee for certain types of development that is used to build more affordable housing. Developers that engage in activities that are “linked” with the depletion of affordable housing such as construction of housing above a certain price point or the conversion of residential square footage into offices must pay to offset the deleterious effects of this activity. Funds from this fee go to replenish the city’s affordable housing supply. To implement a linkage fee, cities must first conduct a nexus study,3 which establishes a linkage between an economic activity and increased demand for and/or decreased supply of affordable housing. If a link is established, the city sets a proportionate per-square-foot fee on new developments through a change to the tax code.

The reality in most neighborhoods is that new homes are being built on empty lots or formerly industrial land, and are adding to the total supply of housing, rather than replacing older lower-cost homes. And in cases where older homes are replaced, they're often replaced with a net increase in the number of units, providing more total places to live. It's rarely zero-sum.

And while it's true that higher-priced  new homes may initially raise the average value of nearby homes in a neighborhood through comps, the same is true of flips, so it's entirely possible for average housing prices to climb without a single new building being constructed in the neighborhood. And the flipside of all this is that this type of activity increases home equity for nearby properties, which probably nobody on Council would publicly claim to think is a bad thing. But they aren't proposing a special new tax to capture those capital gains for older homes; they're narrow-casting it to hit only new construction—even though a $350,000 new home and a $350,000 flipped two-story rowhouse both contribute the same upward pressure to comps.

Plus, after neighborhoods see the first bump in land prices from any initial amenities associated with gentrification, the real danger to maintaining affordability isn't building too much new housing, it's building too little. In neighborhoods that are in later stages of gentrification, like Society Hill or Logan Square, or even Northern Liberties or Passyunk Square at this point, each additional new unit of housing created is going to put downward pressure on home prices, not upward pressure, turning the logic of an "impact fee" on its head.

The housing politics we need would stop dwelling on the supposedly negative impacts of housing, and begin to look at the whole picture: that the "impact" of infill housing is a net benefit for neighborhoods and for the city as a whole. The benefit of infill housing is that it contributes places for people to live, greater residential density to support commercial corridor businesses and public transit, and greater environmental sustainability, by allowing more people to live in walkable neighborhoods where their carbon footprint is much lower than it would be in a suburban location. And while there are certainly some drawbacks too, they can mostly be fixed through policies that redistribute some of the gains from growth.

Council's Mixed-Income Housing bonus program was a great first step toward embracing that kind of politics, where rather than creating a zero-sum conflict where one needn't exist, they created a system where new development rights could be created from nothing, and sold to builders for the benefit of affordable housing. It's the closest thing to a money printer that we own at the local level, and there are similarly boundless opportunities with air rights for historic preservation.

With less than a quarter of the land within city limits zoned to be able to take advantage of the Mixed-Income Housing bonus (and with some key gentrifying areas like Passyunk Square and Fishtown inappropriately left out completely) Council right now has the dial on their money printer turned down to 1, but they could crank it up to 11 if they wanted to, and legalize their best affordable housing idea everywhere in the city through strategic rezonings and code text changes. On the more radical end of the spectrum, they could make RM-1 (for rowhouse-sized apartment buildings) the lowest-density zoning category in all neighborhoods so that the Mixed-Income Housing program can be used literally everywhere. 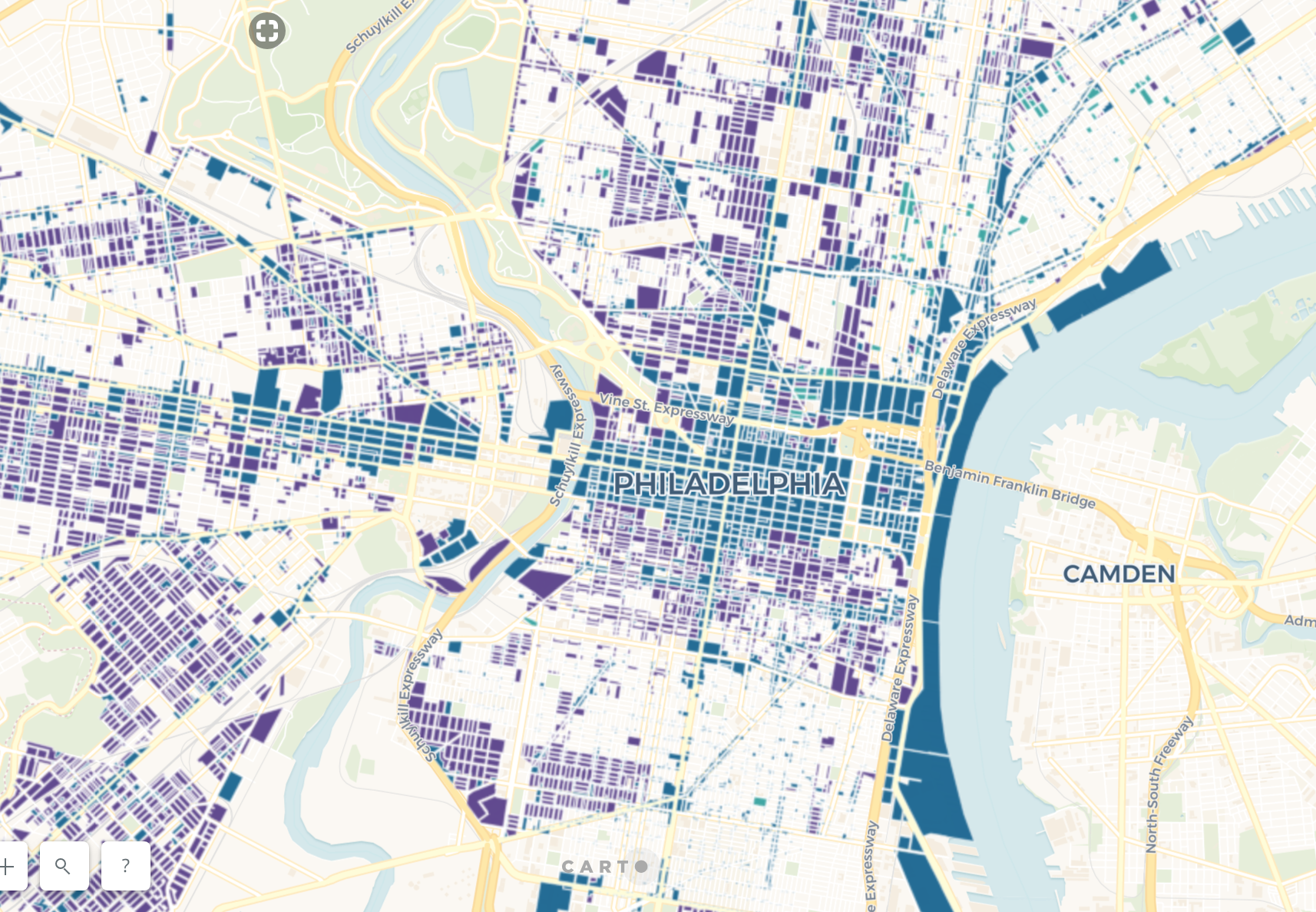 (Shaded areas are where the Mixed-Income Housing program can be used | Map: Aaron Bauman)

Council has already done the hard work to create an affordable housing funding machine that can scale, and create much more new money and affordable units at no additional cost to taxpayers or home builders. The key question before them now is: how much free money do they want to have?