Philly's Housing Shortage and the Problem of Low Vacancy Rates 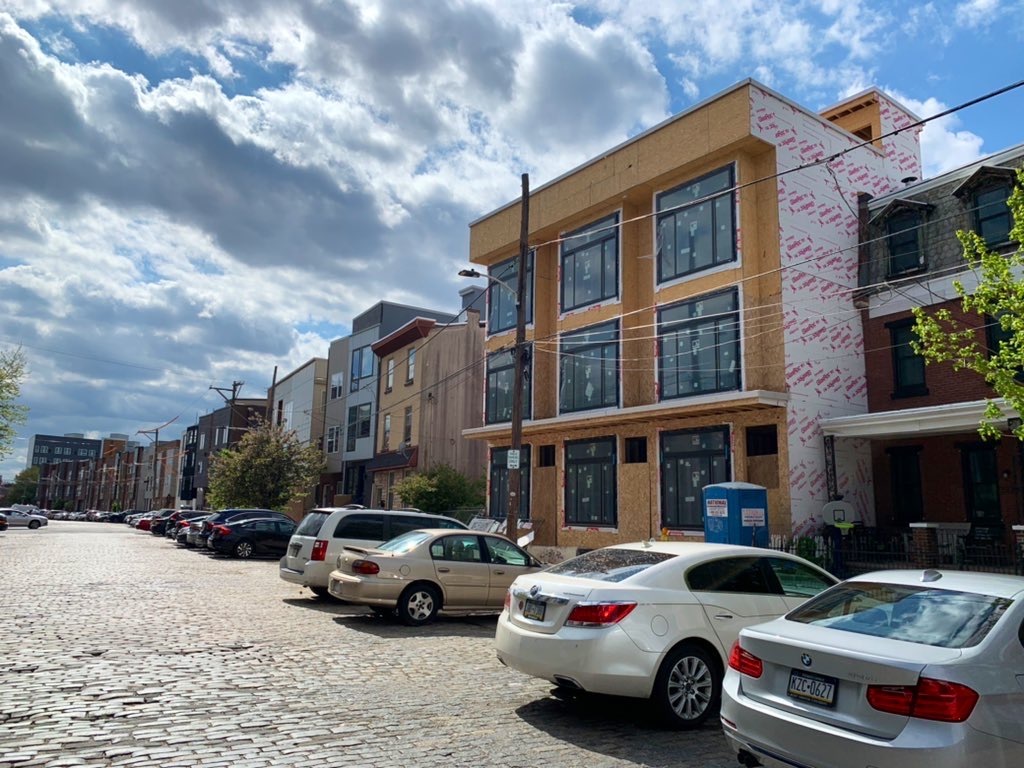 The Philadelphia region is facing an historic housing shortage, with some of the lowest home inventory available in decades in both the city and the suburbs. There are many different reasons why this is the case, not least because the backdrop is a nationwide housing shortage of more than 2.5 million homes, but a big part of it is straightforward: we simply haven’t built enough homes.

Philly had very low home inventory even before the pandemic, and this past year has only seen conditions tighten more, though housing demand did shift around within the city in some atypical ways in 2020.

Michaelle Bond at the Inquirer wrote an excellent piece this week shining a light on what’s been happening, and how this is playing out on the ground for home buyers and sellers, and one important point she makes that’s worth dwelling on is the havoc caused by low vacancy rates for sellers, not just buyers:

"Housing supply has shown some signs of improvement, but not nearly enough to combat the large deficit caused by a variety of factors.

Property owners converted millions of houses into rentals a decade ago after the housing market crash, and landlords are reluctant to sell properties that are earning them income, said Kevin Gillen, a Drexel University economist. The pace of home construction has been slower over the last decade than it has been historically, he said. The intense market for existing homes is scaring potential sellers who would need to look for another home. Baby boomers are deciding to stay put rather than to sell and downsize. Some homeowners haven’t wanted strangers in their homes during the pandemic so haven’t listed their homes for sale, he said.

Some of the people most chronically skeptical about building any new housing often assert without evidence that Philadelphia is actually oversupplied with housing, and that new housing is just sitting there vacant. But the reality is that vacancy rates are very low, with less housing available for sale now than at any point in the last 20 years." 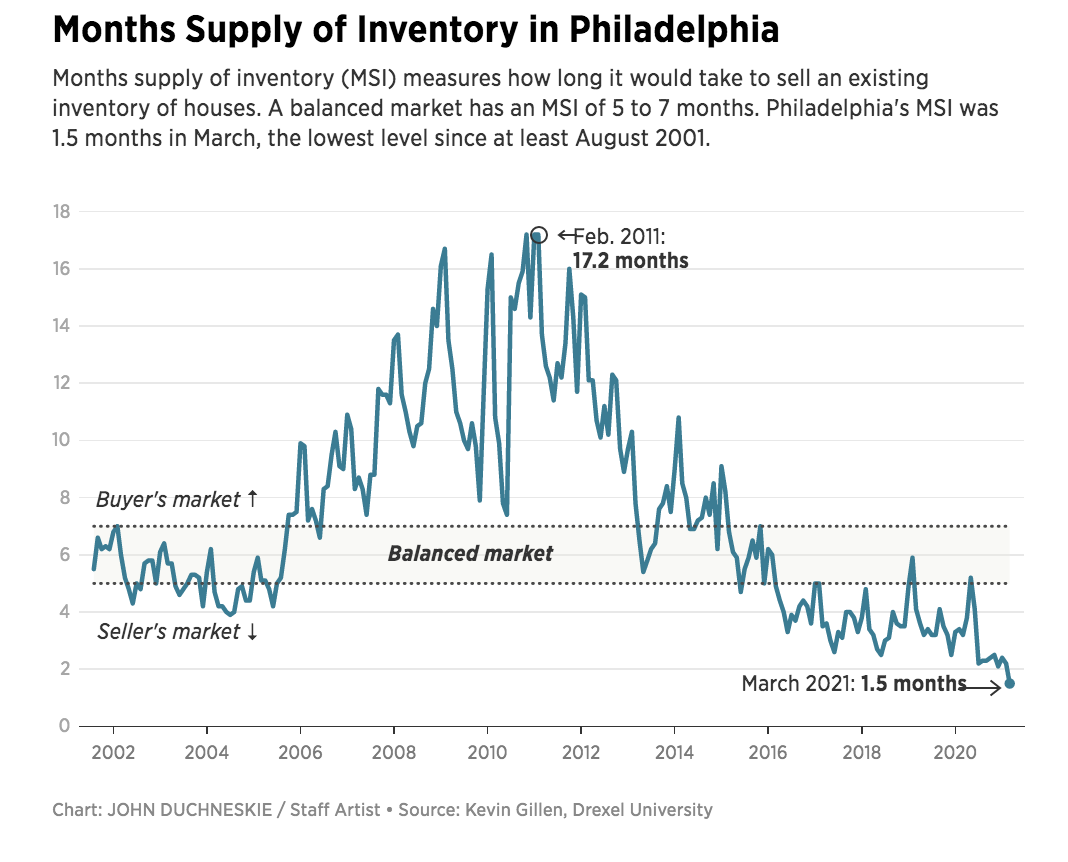 If vacancy rates were higher, that would be much better for everyone because people who are selling a house also need to find some other place to live after they move out. Otherwise, it’s just like a game of musical chairs.

We can’t just rely on current homeowners selling their homes for all of our home inventory needs. If the only way for somebody to acquire housing is for another person to move out, that’s the very definition of displacement. What’s good about new housing is that it usually doesn’t require anybody having to move, and there’s not an existing owner who then needs to worry about finding a new house. New housing inventory (whether in new buildings or reused ones) only helps to unstick the current situation, giving people more options for places to live after they sell their homes.

Maintaining a nice healthy vacancy rate in the range of 7-10% should be local elected officials’ chief policy goal for the market-rate part of the housing market, where the vast majority of people in the city are shopping for housing now and for the foreseeable future. That’s because the vacancy rate is the most important correlate of whether housing is getting cheaper or more expensive overall. If your affordability strategy doesn't have a credible plan to impact the vacancy rate, then you don't really have an affordability strategy.

People complaining about the fake problem of too many vacant homes, and openly wishing for a lower housing vacancy rate, are in effect calling for higher housing costs and a faster rate of price increases, and aren’t about to do any favors for lower-income renters or home-buyers. The reality is that Philadelphia renters and first-time home-buyers have suffered under a long-term Seller’s Market for the better part of a decade, with only a few solid years of housing production to speak of that provided any relief. There’s been fairly low inventory consistently for most of the period following the Greater Recession, and it’s gotten to the lowest point over the last two years. 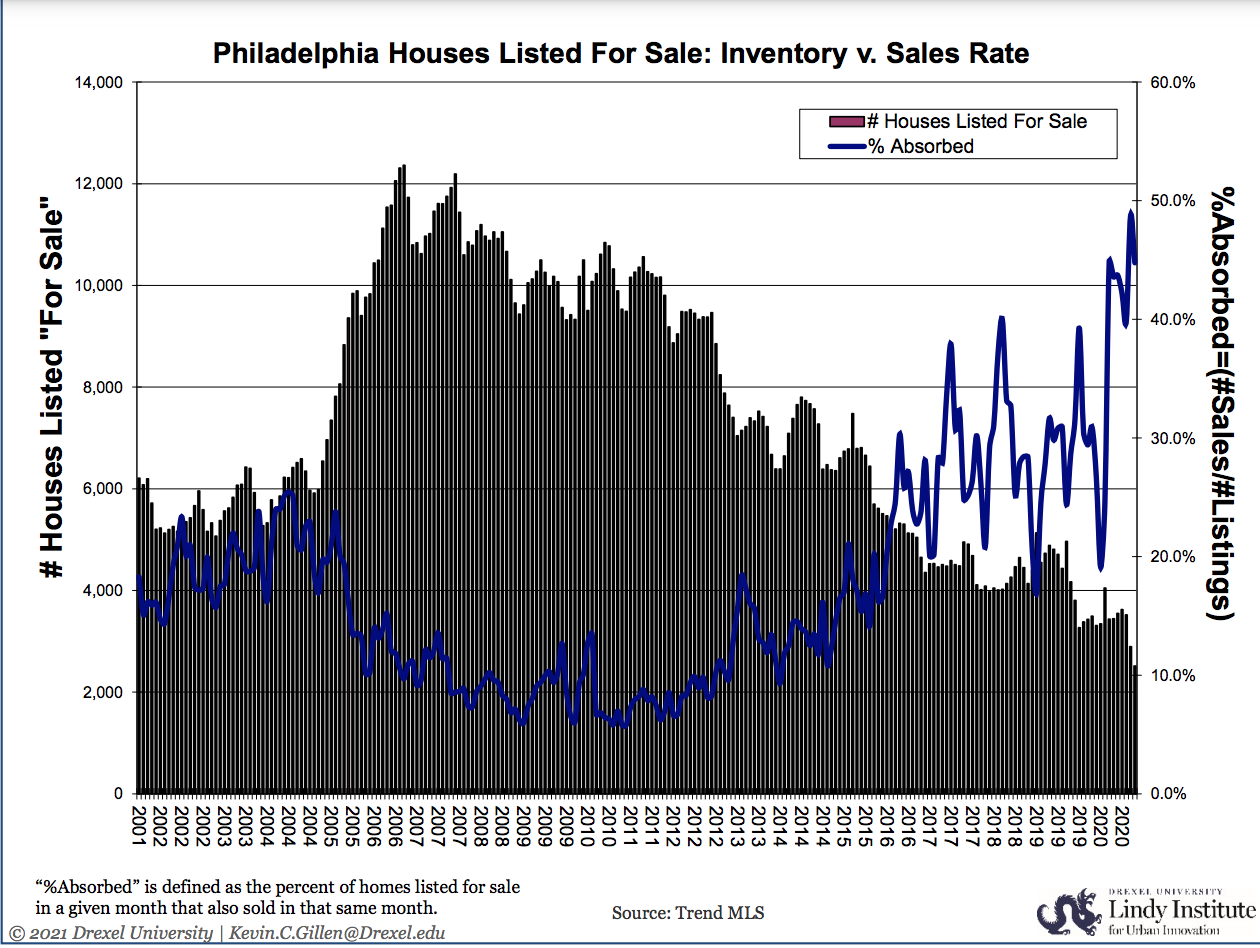 For anybody wanting to really move the needle on causes like greater housing affordability, availability of more starter homes, and the preservation of so-called  “naturally-occurring” affordable housing, there’s no better policy than high inventory and high vacancy rates. And the good news is, getting there mostly just involves allowing more housing construction to happen in more high-cost neighborhoods. And if local governments won't do it, there's a lot more that state government can do to fix the problem for them.

Sign up for our weekly email newsletter for more news, analysis and opportunities for action