PPA Appoints Bucks GOPer Scott Petri as New ED, Who Pushed For More Suburban Residents on the PPA Board 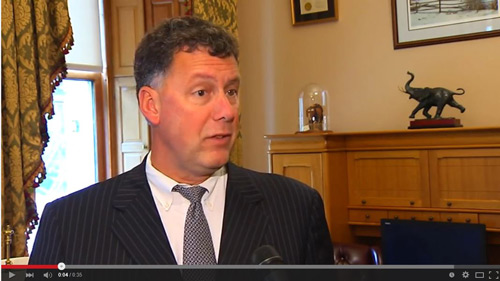 In a Friday afternoon news dump, the Philadelphia Parking Authority announced that their brief experiment with leadership diversity has come to a swift end with the hiring of suburban Republican Rep. Scott Petri as the Authority's new Executive Director.

"The Philadelphia Parking Authority named a new executive director Friday, a Bucks County Republican who pledged to use a pair of recently released, highly critical state audits on the agency as a blueprint for reform.

“My role will be to question everything we do, why we do it, and are we obtaining the best result,” State Rep. Scott Petri said after being appointed at the PPA’s monthly board meeting.

Petri, 57, who represents Pennsylvania’s 178th Legislative District in Bucks County, will step down from the legislature before beginning the PPA job on Jan. 2."

The move comes on the heels of a terrible news week for the PPA last week, when Auditor General Eugene DePasquale released the results of an audit that described former Director Vince Fenerty's tenure as the "reign of an unchecked tyrant," enabled by a negligent PPA Board, and whose mismanagement may have cost the city and school district as much as $77 million over the last 5 years.

After the PPA Board allowed Fenerty to resign with a larger-than-necessary pension, they voted in Tolson as interim director—a move that was supposed to signal a commitment to change, given Tolson is a Democrat and would be the first black woman to run the Authority. And indeed, Tolson has been doing things differently at the agency.

As Jim Saksa at PlanPhilly reported, patronage is down and profits are way up at the PPA in the time since Tolson took over.

"Comparing the first half of PPA fiscal year 2016 under Fenerty to the first half of this fiscal year under Tolson, PPA net revenues are up $3.8 million, total payroll costs are down $1.7 million, operational support (administrative) expenses are down $1.9 million, and total operating expenses are down $832,000. Along with some other, less dramatic changes, net operating gain — the government entity equivalent of profits —  increased $8.4 million, a 20 percent increase overall.

Those numbers aren’t just good for the agency: The PPA’s excess revenues get divided between the city and the school district. A more efficient parking authority means more money for school books and road repaving.

Tolson wants to stay on as the PPA’s executive director, but despite the incredible numbers, she still has “interim” in her title, even though the PPA board’s search for an executive director was supposed to wrap up last month."

So to recap: Tolson becomes the first black woman to run the Authority. In just a few months, she manages to increase the PPA's net operating gain by 20%. She tells the media she wants to stay on as Executive Director. And then she gets replaced by some random white guy from the suburbs for no reason.

The fact that Petri isn't even a city resident is especially galling given that everyone from Eugene DePasquale, to Governor Tom Wolf, to incoming Controller Rebecca Rhynhart, to Councilmembers Helen Gym and David Oh called on the state legislature to restore control of the Parking Authority to the City of Philadelphia after last week's scathing report. Tolson is at least a city resident and brings that perspective. It's unclear what the value-add would be from hiring a Bucks County resident who seems to have no personal or professional experience with urban transportation.

What's fascinating about the PPA Board's choice of Director is that Petri isn't some country club moderate Republican. He's been a prominent culture warrior against the federal transgender-inclusive bathroom bill as a state representative.

Petri confirmed in an interview with the Free Press that he was in attendance at the annual New Hope Celebrates Pride Parade as it began across the Delaware River in Lambertville, N.J., but chose not to march because “there was nobody to march with — no Republicans there, no elected officials — so I turned around and went home.”

“The only choice would have been to march with Democrats, and that I cannot do,” he added."

Asked whether transgender people and students need to be protected, Petri couldn't say.

“I don’t know,” replied Petri. “It depends. Providing accommodations so they feel comfortable — does it mean sharing the same bathroom? No. Going to the the bathroom is the most personal, confidential thing people can do.”

Petri was also notably the state Rep. who pushed a bill last year to change PPA Board residency requirements, and allow more suburban residents (and specifically ones who do business with the PPA) to join the Board. The bill was vetoed by Governor Tom Wolf, but had passed the House with a number of Democrats crossing to vote for it, most notably Rep. Bill Keller in the 184th District, who is facing a competitive primary.

The legislation was introduced by State Rep. Scott Petri (R., Bucks), who said he was looking for entities in the suburbs that do business with the authority to have representation on the board. Some questioned if the true force behind the legislation was one or more of the current members looking to leave the city. The six board members serve staggered 10-year terms, meaning turnover is slow.

Petri has said no board members asked him to introduce the bill. After Wolf's veto was announced, he said he stood behind the legislation but was willing to work with the governor's office on further reforms to the authority.

This seems extremely fishy. Petri was pushing to increase suburban representation on the board as a legislator, and then a short while later was appointed to the Director? Who wants Petri on the board, and why? What suburban businesses is he trying to help out in this position?

It's hard to imagine a more tone deaf response to the blowback from last week's Auditor General report. People are upset the PPA is a racially homogenous, Republican-controlled, state-controlled interloper that's wasting taxpayer money, and is out of touch with the needs of the City. So they replace the first black Executive Director who's turning things around with a white Bathroom Bill crusader from Bucks County, who's specifically been working to further reduce local control of the Authority.

It's outrageous and should lead to a full-court press by local elected officials to take back control of the Authority.