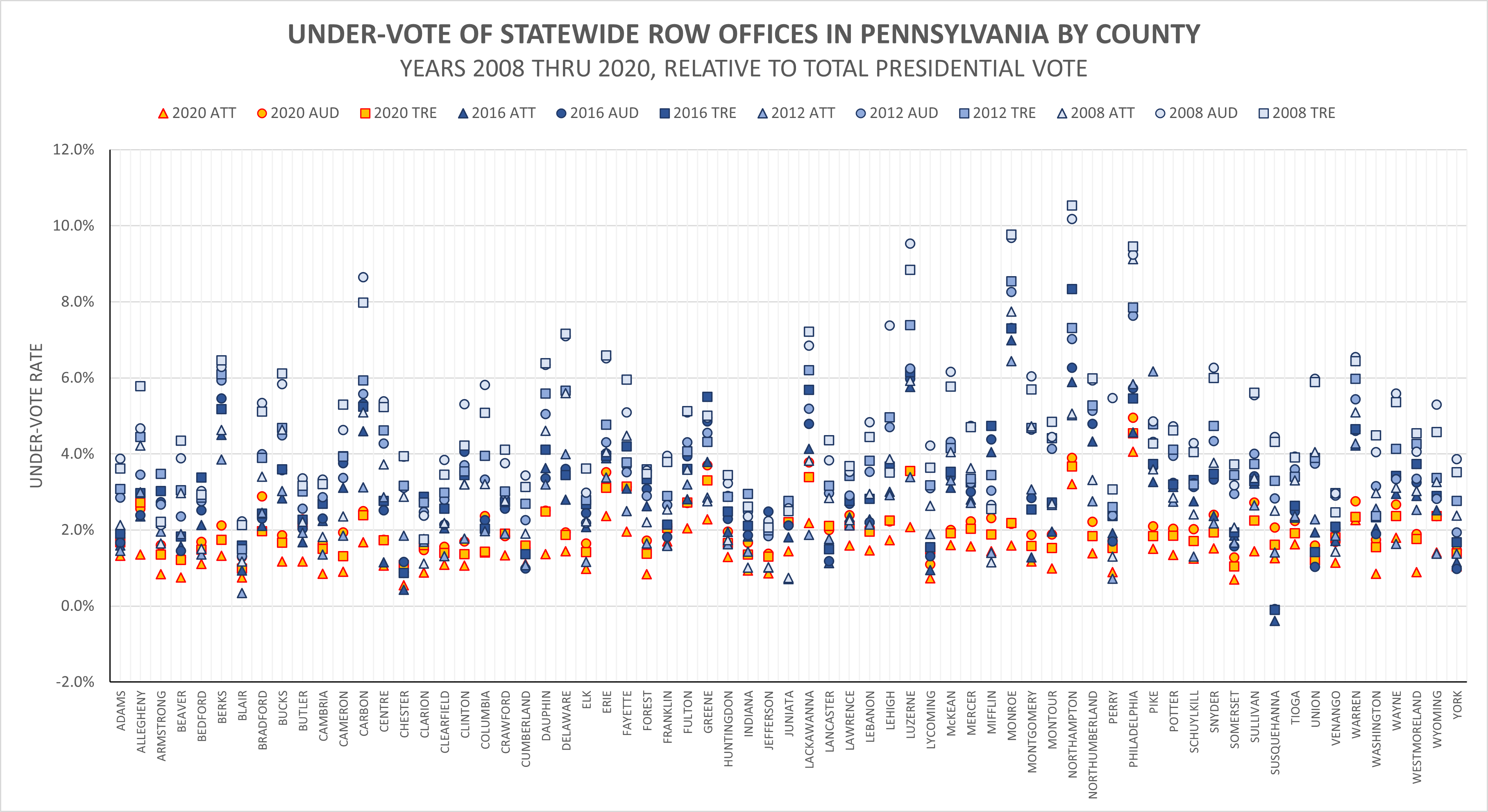 Joe Biden won Pennsylvania, it’s safe to say, but his coattails were notably weak for down-ballot Democrats, and some people have theorized that the elimination of straight-party-ticket voting in Act 77 is an explanation for this.

While the Act 77 law has been praised for its foresight in creating Pennsylvania’s vote-by-mail system well ahead of the pandemic, legislative Democrats have always felt it was much more of a mixed-bag. Many Democrats opposed the deal when Governor Wolf announced an agreement with legislative Republicans to expand voting options, arguing that the elimination of straight-ticket was too costly of a trade for down-ballot Democrats to make to get early voting and vote-by-mail.

So some people are looking at the election outcome as partial vindication of this original skepticism about Act 77, since even though Biden won the state by more than 1 percentage point, there was very little positive movement for Democrats in the legislature, and Democrats lost two of the three statewide row office races.

Mike Johnson, Data Director at AFL-CIO PA, looked into this question in the case of the row office races, and argues that it’s an inadequate explanation.

The pro straight-ticket voting theory is that it reduces down-ballot under-votes for same-party candidates, which believers theorize could have helped some more Democrats win if they had been more automatically tied to Biden. But Johnson shows that in 2020, under-votes were down compared to previous Presidential election cycles. He also finds that affirmative votes for the Republican nominees for Auditor General and Treasurer, not undervotes, are what made the difference for Nina Ahmad and Joe Torsella. 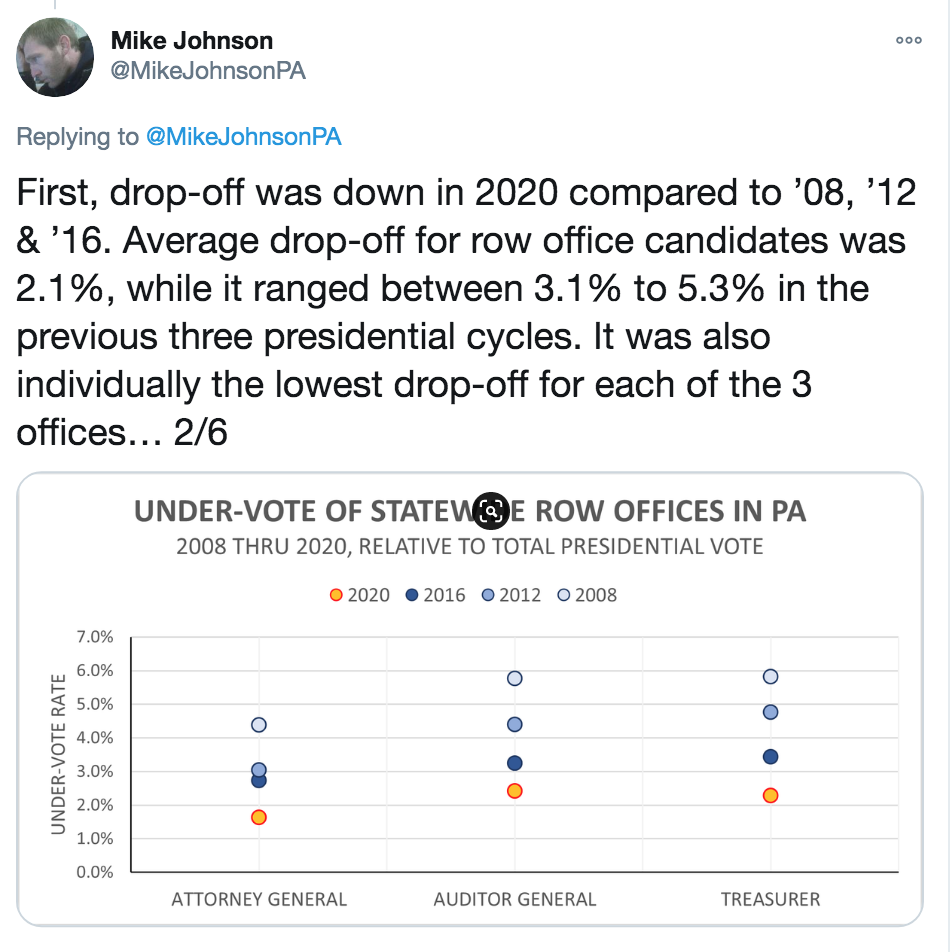 Johnson also notes that Republican voters have tended to use the straight-party-vote option at a higher rate than Democratic voters, so while it would require more analysis to say for certain this is how it played out in individual districts, it seems unlikely that the loss of straight-party hurt Democratic legislative candidates either.

Philadelphia's Turnout Was the Highest Since 1984

Early turnout numbers closer to Election Day suggested Philadelphia would either meet or just slightly exceed 2016 turnout numbers, but with all the votes counted, it’s now clear that the city saw the highest voter turnout in 25 years.

About 66% of Philadelphia’s 1.1 million registered voters participated in the election this year, up from 59% in 2016, reports Layla Jones at Billy Penn.

Combining in-person with mail and valid provisional votes, more than 749,000 Philadelphians ballots were cast in the November election, according to the uncertified tally. Contrary to early predictions, more city voters cast a ballot this year than when Obama was elected. Joe Biden received 81% of this year’s Philly vote, and Donald Trump pulled in 18%.

Just under half the total, about 365k of the city’s votes, came via mail ballot this year.

Turnout was high nationwide. More than 155 million Americans voted in the 2020 election, which is more than over a century, according to projections from Bloomberg. In Pennsylvania, more than 6.9 million people cast a ballot, PennLive reports, which is nearly 71% of the voting age population and the highest since 1960.

Counterintuitively, this record turnout did not cleanly translate into greater support for Biden in Philadelphia than Hillary Clinton received in 2016, and Trump actually improved on his 2016 margin in the city.

In one of the most Democratic cities in the country, the president-elect’s support was roughly flat, even as Trump increased his support.

One of the most interesting facets of turnout this year was that for the first time there was a significant partisan skew to who voted by mail and who voted in person—a pattern that didn't exist prior to 2020 before Donald Trump polarized the issue with Republicans. 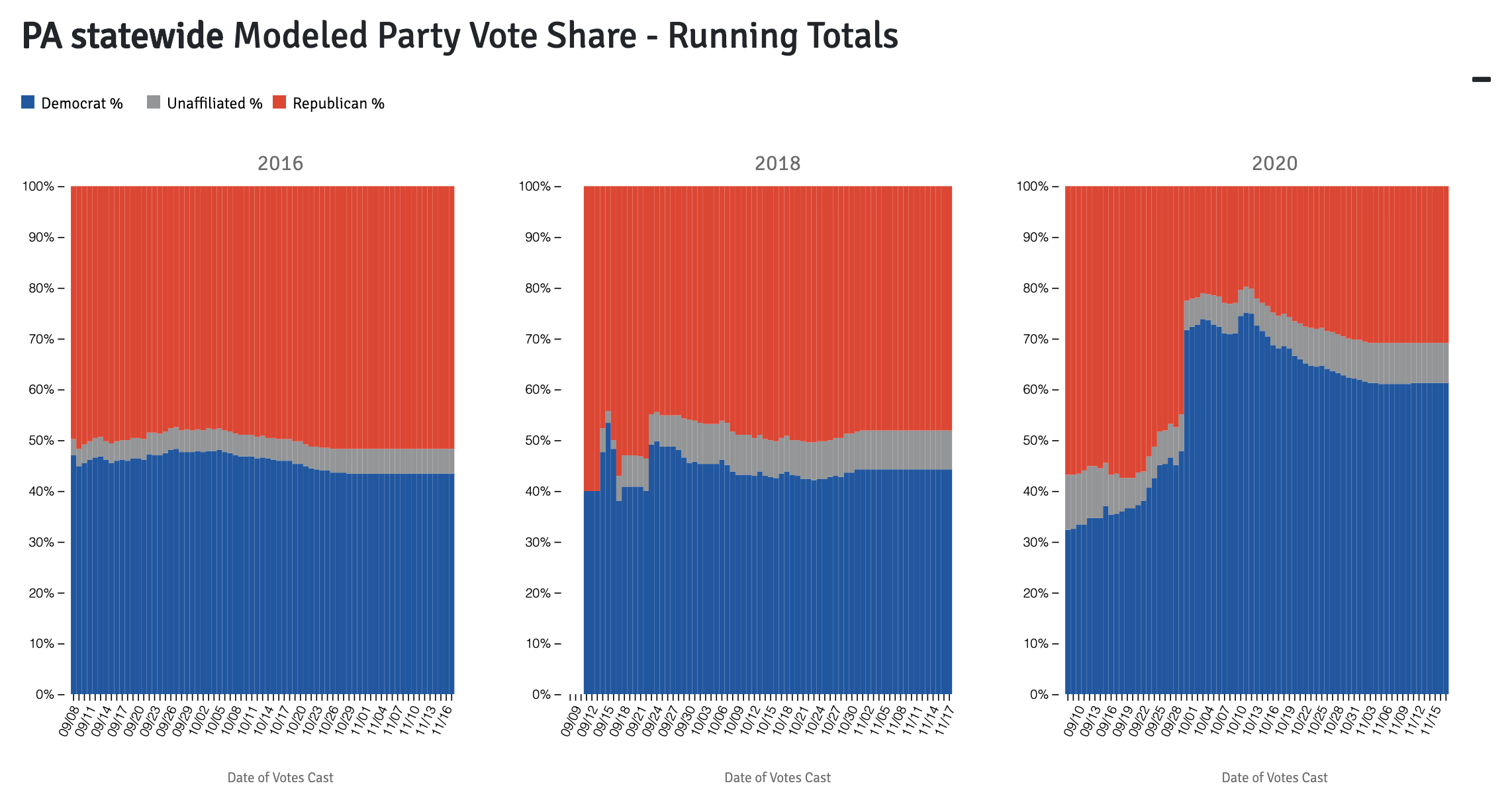 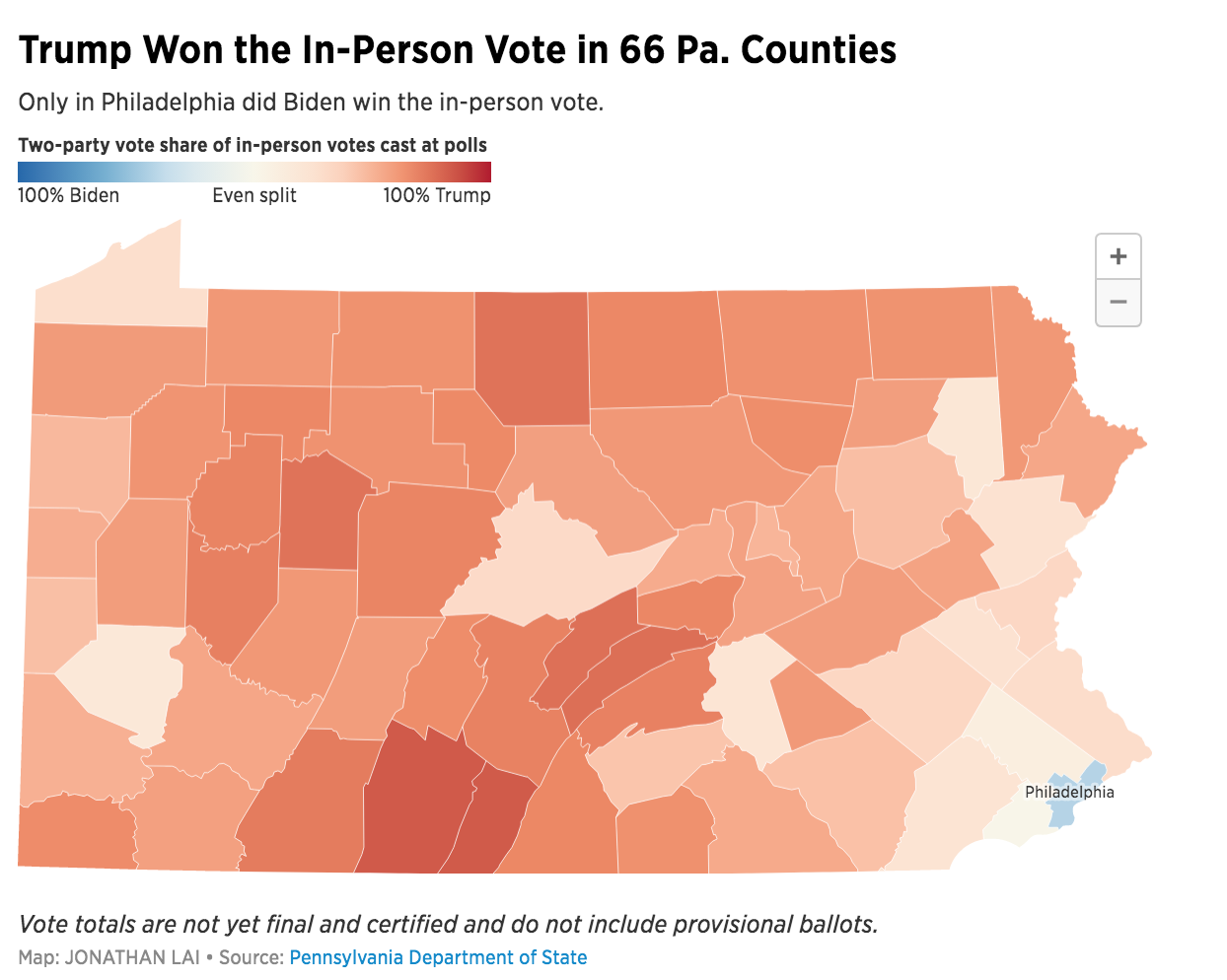 Even in safely-Democratic counties like Allegheny and Montgomery, the partisan effect was still very pronounced. In Allegheny, Biden won mail 80-20, while losing in-person 41-59%. In Montgomery, Biden won the mail by 83-17, while trailing in-person 45-55. And in Philadelphia, Biden won 92% of mail ballots, with just 8% going to Donald Trump, while the in-person vote went 71-29 for Biden.

The big question going forward is whether this pattern will continue after Pennsylvania's vote-by-mail system has been in effect for longer, and after Donald Trump is no longer actively polarizing the program as President.