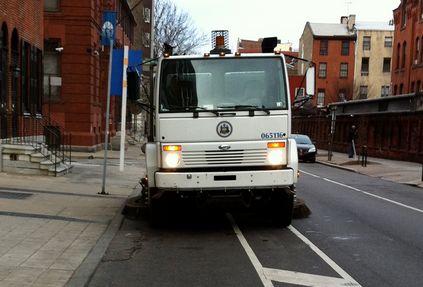 Mayor Kenney included a proposed over $10 million for street sweeping in his budget proposal to City Council for fiscal year 2021 this week, with $67 million pledged over the next 5 years. While it's too soon to unfurl the 'Mission Accomplished' banner just yet, it's worth taking a minute to celebrate this milestone and take stock of just how far the politics of this issue have moved in the past couple years.

The Kenney administration is now committing to essentially a citywide street sweeping program, complete with alternate-side parking rules so that the sweepers can get to the gunk next to the curb, at least in most neighborhoods.

But it wasn't always thus. Despite pledging to deliver a citywide sweeping program during his 2015 campaign, Kenney began softening his rhetoric on this shortly after winning the primary, saying that his approach would be a uniquely Philadelphian program where neighborhoods or even blocks might be given a choice to opt into having their streets swept. From the beginning, Kenney staff seemed to be trying to solve for a way to do this without riling up the parking beast.

By March of 2016, three months into his first term, Kenney was saying things like this.

“I’m not forcing people to have a clean street,” he said. “We should clean the city at least twice a year with a massive clean-up, which we’re planning. But in the meantime, on a bi-monthly or monthly basis, I’m not going to have people screaming and yelling that they don’t want to move their car from one side of the street to the other because it’s such an inconvenience, when they do it in Manhattan twice a week.”

Then, very little happened for most of Kenney's whole first term, with street sweeping being downgraded to a long-term wish in the Zero Waste Action Plan with no deadline or specifics attached.

Advocates continued to chatter about it online, and interest continued to build over the last year. We ran a petition on this around 2017 and started regularly covering the topic on our blog, as a frustrating example of something the City could do to improve people's lives relatively cheaply and easily, if not for some really backward politics and priorities standing in the way.

Things started to take a turn when Inquirer columnist Mike Newall took the issue up as a personal crusade, writing several popular columns that very effectively ridiculed the administration into taking action. The Kenney administration finally responded to the media pressure by instituting a pilot program in a few neighborhoods using gas-powered leaf blowers as a way to avoid the tough politics of alternate-side parking. Environmentalists and public health advocates panned this idea over the bad air quality effects, but the pilot was allowed to run its course.

City Council didn't really take an interest in the downsides of this approach until WHYY's Aaron Moselle published an article showing that city workers were not being equipped with proper safety gear, with the memorable headline "Feces and needles ‘jumping in the air’: City street cleaners want better safety gear." That article came about as the result of a Right-to-Know request from Jake Liefer of 5th Square, which confirmed the City's deficient worker safety protocols. Council is now going to be holding a hearing on this, but the issue is basically moot because the administration's report on the pilot recommended phasing out the leaf blowers.

With the leafblowers off the table, there was only one workable option left, and it was the one we've been calling for all along, mechanical sweeping with alternate-side parking.

Mayor Kenney announced in his inaugural address he would be rolling out such a program starting this summer, with the program reaching the whole city by 2023. He even went as far as to say in that address, "if you don't want to move your car, tough," signaling that the term-limited administration was finally, maybe, ready to the take on the parking issue they'd been trying to avoid the whole time.

That brings us up to the present day, where Mayor Kenney included in his budget proposal over $10 million more for street sweeping, which is an amount in the range of what a citywide program would cost. There's also evidence that the administration really is actively planning to roll this out this year. In a presentation at the Philadelphia Parking Authority's last board meeting, attendees with the Pay Up PPA funding advocacy group learned PPA will begin coordinating with Streets on ticketing starting in August, and there will be a designated 2-hour period when parking lanes must be cleared for sweeping (although it's still not clear how often.)

The budget's not finalized yet, so the funding situation could still change, but it seems clear the Mayor plans to make good on his inauguration pledge during the timeframe he gave—a real material win for quality of life in Philadelphia, and a neat example of how media activism can be used to drive a message, change public opinion, and ultimately change the politics of an issue.