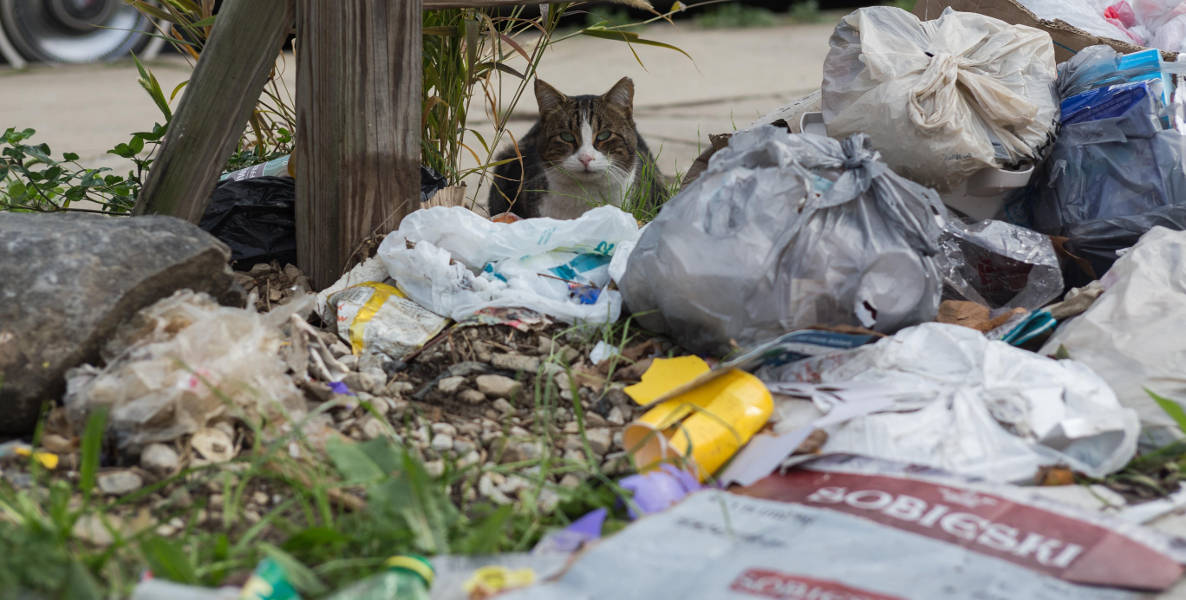 Trash has become a hot-button political issue this year as service disruptions, irregular collections, and out of control litter contributed to a sense of unease about city government’s ability to carry out some of its basic functions.

And while the problem seems intractable at the moment, there are some hopeful signs that the growing salience of this issue could finally stir elected officials to action—if not in this Mayoral term, then the next one.

Streets and sanitation issues have been near the top of the public’s agenda for city service improvements for years, according to the City’s last few resident surveys, but the pandemic conditions and aftermath have really brought them to the fore in an unprecedented way over the past year.

There was a satirical piece, "Philly Garbage Strike" making the rounds this week from writer Martha Cooney about Mayor Kenney staring down a fictional garbage strike, and opinion leaders from WURD’s Charles Ellison to the Inquirer opinion section have made it a continual focus. 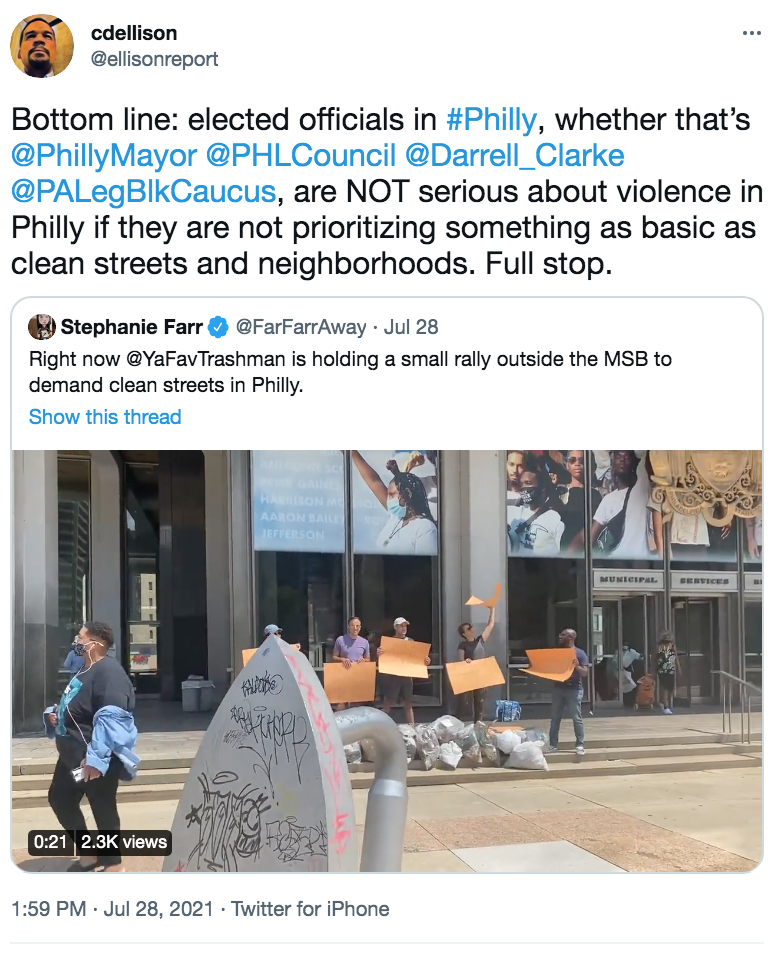 While the focus on trash and litter has sometimes been criticized as excessively media-driven, it’s only a media curiosity because trash stories seem to drive a lot of reader engagement. People are interested, and love complaining about it! And there are signs though that all that glorious complaining is starting to make a concrete difference.

There’s some real money for a real street sweeping program in the city budget this year, and there’s a lot of useful public agenda-setting discussion happening around this issue that is going to be helpful for making the 2023 Mayoral campaigns better on this.

First, there was a genuine win for the Sweeperheads in the Mayor’s budget, where the plan is to spend $62 million on a street sweeping program over the next 5 years. If it happens, that’ll be a real downpayment on bringing back this basic municipal service for more parts of the city.

It’s a little bit of a mixed bag of an announcement, according to the Inquirer’s report. Alternate-side parking rules—necessary for actually cleaning right up next to the curb— will be a part of the program now, whereas in the past the Kenney administration had done everything possible to avoid that particular conflict. That’s progress. The city’s survey of the pilot zones they swept during the leafblower pilot found that 91% of residents surveyed were willing to move their cars for street sweeping.

The same survey unfortunately also found that 92% of people in the pilot areas supported the use of the gas-powered backpack leafblowers, and the Kenney administration plans to keep those in the mix too, even though they emit shocking amounts of air pollution. It's always possible people were reacting favorably not to the blowers specifically, but to the fact that this was the only kind of litter remediation the city had done up until this point, and they were giving a thumbs-up to the general direction of things.

It’s also still the case that the street sweeping program will be limited to just a few neighborhoods through 2023—officially a broken campaign promise by the Mayor, as Inquirer reporter Laura McCrystal points out.

“Now the administration is resuming plans to expand the program — but it won’t be citywide by the end of the mayor’s term in 2023. The administration blames the pandemic for coming up short on that campaign promise.

Resuming citywide street sweeping was one of Kenney’s campaign promises when he first ran for mayor in 2015.”

The leafblower issue and the universality issue go hand-in-hand, since this bears on how large of street sweeping crews the Mayor’s office is envisioning, and how much the total program will cost. The version of this where a single worker drives a mechanized sweeper costs a lot less than the Mayor’s pilot version of this, where it was common to see 7 or 8 people with leafblowers on a block at one time. The Mayor’s disinterest in controlling the program costs is an important reason why they won’t bring this service to every corner of the city on Mayor Kenney’s promised timeline.

Still, the fact that the Keney administration is begrudgingly going through with even a partial version of a sweeping program is a win, because it's a sign that the politics are really starting to shift.

Outside of government, there’s more helpful agenda-setting work happening too that’s worth paying attention to for 2023. This Thursday, Terrill Haigler, aka Ya Fav Trashman, and fellow activists including business owner and RCO leader Morgan Berman, and former Zero Waste cabinet director Nic Esposito, held a protest at the Municipal Services Building where they dropped off bags of garbage to protest what they dubbed as a trash “epidemic.”

The group released a list of demands, calling for the following changes:

It’s important that people considering a run for Mayor in 2023 try and seek out the insights of people who have worked within the Streets Department to understand what it will take to improve the situation. At the same time, there’s also been far too much emphasis on inward-looking solutions, and not enough on trying to copy best practices from the many big cities who have successfully solved their trash and sanitation problems.

An Inquirer editorial last week called on the city to consider more structural changes that, to date, have been considered off the table.

“​​In Edinburgh, Scotland, the city’s rowhouse neighborhoods don’t put their trash out on the street, they have communal bins every 100 meters. The bins make trash collection more efficient and less labor-intensive, and could reduce the need for constant overtime.

In Austin, Texas, residents rent specialized household trash bins from the city. These bins are emptied by the truck and use smaller crews. This reduces injuries to workers, as they are protected from directly handling hazardous material.

Philadelphia might require a mixed strategy, with Overbrook and Mount Airy using rented bins, and East Passyunk and Fishtown hosting communal bins. We don’t know yet because we haven’t investigated."

While we can’t know exactly which issues will be the most salient by the 2023 election season, it does seem clear by now that the Kenney administration doesn’t plan on pushing any major structural reforms to the trash and sanitation issues in the second half of the Mayor’s term. That means there will still be plenty of room for the next Mayor to make their mark, and if the issue stays high-salience with the public, we can expect to hear a lot about it from the 2023 candidates.

Writing in Slate, Jordan Fraade points to former NYC Sanitation Commissioner Kathryn Garcia’s recent Mayoral campaign, which came within one percentage point of winning the Democratic primary, as evidence for the political potency of a “back to basics” type of pitch to improve city service delivery. Fraade suggests that while this pitch nearly worked for Garcia, who ran as more of a moderate, it could also work for more left-wing figures, noting that a reputation for efficient and effective service delivery has been a critical part of the brand for the more politically-successful socialist elected officials in U.S. history.

The point is that it’s a pitch that has some resonance with people across different political ideologies, and perhaps especially with the not-especially-ideological majority of the electorate who just want city services to work, and are fed up with the dysfunction.

A candidate for Mayor who can credibly claim to have the vision and the skills to fix the trash situation, and deliver other public services efficiently at a reasonable value, is going to have a very compelling pitch to the 2023 Democratic primary electorate.

Stay up to date on the latest politics and policy news in Philadelphia and Pennsylvania by signing up for our weekly email newsletter.