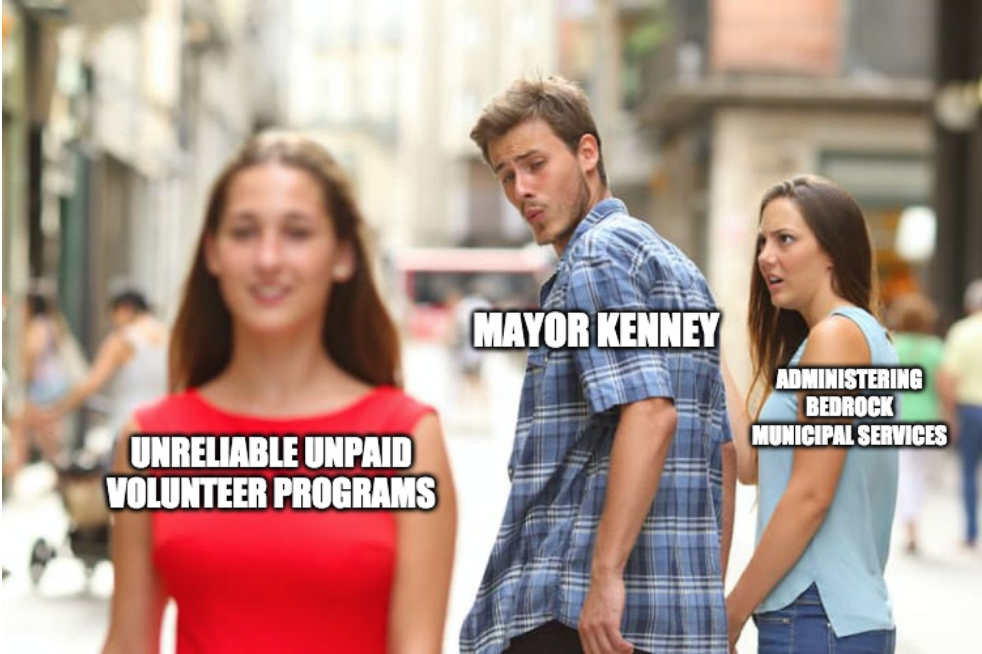 Philadelphia City government has an unfortunate tendency to assume volunteer magic will fill gaps in their service provision that are much too big to fill with unpaid neighborhood volunteer efforts alone—a similar phenomenon to the unfunded civic engagement mandate problem we've called out in the past. A couple of stories published this week help illustrate this problem in the areas of street trash cans and tree maintenance.

The first article by Michaela Winberg in Billy Penn checks in on the "community cans" pilot program where the City will try outsourcing the core municipal function of emptying street trash cans to unpaid volunteers. Everybody knows Philly is dirtier than it needs to be, and that litter is a big issue, but there's a lot of incoherence among decision-makers about what the implications for policy should be. Specifically, the Streets Department has been in the grips of an esoteric theory that says putting out more street trash cans will encourage more litter, and so it follows that removing street trash cans should tend to reduce it. This has been used as a rationale for Streets to remove a lot of street trash cans from busy areas.

Behavioral researchers working with the City recently tested this theory and found that the intuitive view is actually right, and removing the cans increases litter. But sadly this finding hasn't led decision-makers at Streets to embrace the intuitive municipal solution, where ideally Streets would put out a lot more trash cans, and then pay more people to go around emptying them more frequently. Maddeningly, the proposed solution is just more volunteer magic.

As part of its Community Cans program, the city is providing the coveted items to blocks in Southwest Philly and Juniata Park. The catch? The neighborhoods will have to empty the rubbish themselves — and then put the bags out with their regular garbage collection.

Getting neighborhoods to agree to do their own maintenance was key to selecting them, Nic Esposito, director of the Zero Waste and Litter Cabinet, told Billy Penn. After Philly’s Office of Innovation and Technology helped the Streets Department highlight areas with bad Litter Index Scores, they narrowed things down to places where people were willing to put in the work.

“The trash is to be managed by the community sponsor and their community partners,” Esposito said. “The city does not empty.”

This is austerity, plain and simple, and it's not going to work because these kinds of slapdash volunteer efforts are just way less reliable than using paid workers who are directly accountable for doing the work. That's not a reflection at all on the individual volunteers who will be tasked with maintaining the cans—it's just the reality of volunteer organizations and their spotty capacity.

Without speaking for Fishtown Neighbors Association (where I am a board member) my personal observation is that FNA's Feed the Fish program that is the template for Community Cans has been a necessary but insufficient adaptation that came about out of necessity in the absence of adequate city sanitation services. It also has high start-up costs that were funded by Penn Treaty Special Services District, the local fund sponsored by Rivers Casino, which doesn't exist in most other neighborhoods. There's still way too much litter around the neighborhood, in large part because even more official city trash cans are still needed, and because the City also doesn't clean up after themselves on trash day with regular street sweeping. Pilots are great for untried ideas, but the best practices for sanitation programs are really well-established at this point, and there's just no need to innovate in this particular area. We should just be copying and pasting the best practices from other cleaner cities around the world.

The other story from this week highlighting the problems with the volunteer magic approach is Frank Kummer's piece on the 10-year Urban Forest plan the City will pursue, following some alarming news that the tree canopy has declined by 6% despite an increase in tree plantings.

Multiple city departments provided money and built partnerships with community organizations and corporate donors including TD Bank through the TreePhilly program, which has given away 24,000 trees since 2012.

The Pennsylvania Horticultural Society has also contributed through its TreeTenders program, which offers training in planting and caring for trees.

One problem with the current approach is that it relies excessively on individual initiative instead of municipal responsibility. Property owners need to actively request the trees, as opposed to the City deciding where they should go. At a minimum, the default should be flipped to opt-out instead of opt-in.

The bigger issue though is that once the street trees are planted, many are lost due to lack of maintenance because we mainly use volunteer magic to keep them alive. PHS's Tree Tenders volunteer program is great, but if it's results we care about, volunteer organizing should be seen as supplemental to an actual maintenance contract with an arborist organization that's paid to maintain street trees. With the volunteer efforts as the primary maintenance strategy, it's no wonder we're losing ground.

In Mayor Kenney's second term, it's time to get back to basics, and stop cheaping out with excessive reliance on unpaid volunteers to do the bedrock functions of municipal government.