The Pennsylvania election updates are coming fast these days, and to help you cut through the noise, each week we’re spending some time summarizing all the high-level takeaways that everybody needs to know about. Read on for this week’s news, and send us an email at [email protected] if there are questions you still have and want to see answered in an upcoming newsletter.

Satellite Election Offices will open on a rolling basis

That means starting September 29th, voters will be able to drop off their mail-in ballots in-person at one of the SEOs during their hours of operation. Voters who have not yet requested a mail-in ballot will be able to go to the office, request a ballot, fill it out, and turn it back in—all in one trip. For those who have already requested mail ballots, the Commissioners will begin mailing those out by this Friday.

The Commissioners also voted Wednesday to update the procedures for replacing mail-ballots before the election. Voters must wait until October 6th to request a replacement ballot at one of the Satellite Election Offices, in order to avoid duplicating ballots already being delivered in the mail. So if your ballot hasn’t arrived by the 6th, and you think it may have been misplaced, you can go to one of the SEO locations and get a new one.

Mail-in ballots come with two envelopes—a “secrecy envelope” and a “Voter Declaration envelope.” Nobody needs to know those terms, but you do have to remember to include both envelopes, and sign the outside one.

If you don’t include both envelopes, your vote won’t be counted, according to last week’s Pennsylvania Supreme Court opinion. According to some projections, based on the rates at which people did not include the secrecy ballot during the primary, this could lead to as many as 20,000 votes in Philadelphia not being counted, and as many as 100,000 in Pennsylvania overall. The Biden campaign is taking this seriously and launching a voter education campaign about the two envelopes.

The City Commissioners released a voting guide with pretty straightforward illustrations of how it all works, and it’s worth fixating on just these slides because this is the part that’s easiest to accidentally mess up if you’re not paying attention. Make sure not to write anything on the inner envelope either, as that’s another reason your ballot could be rejected. 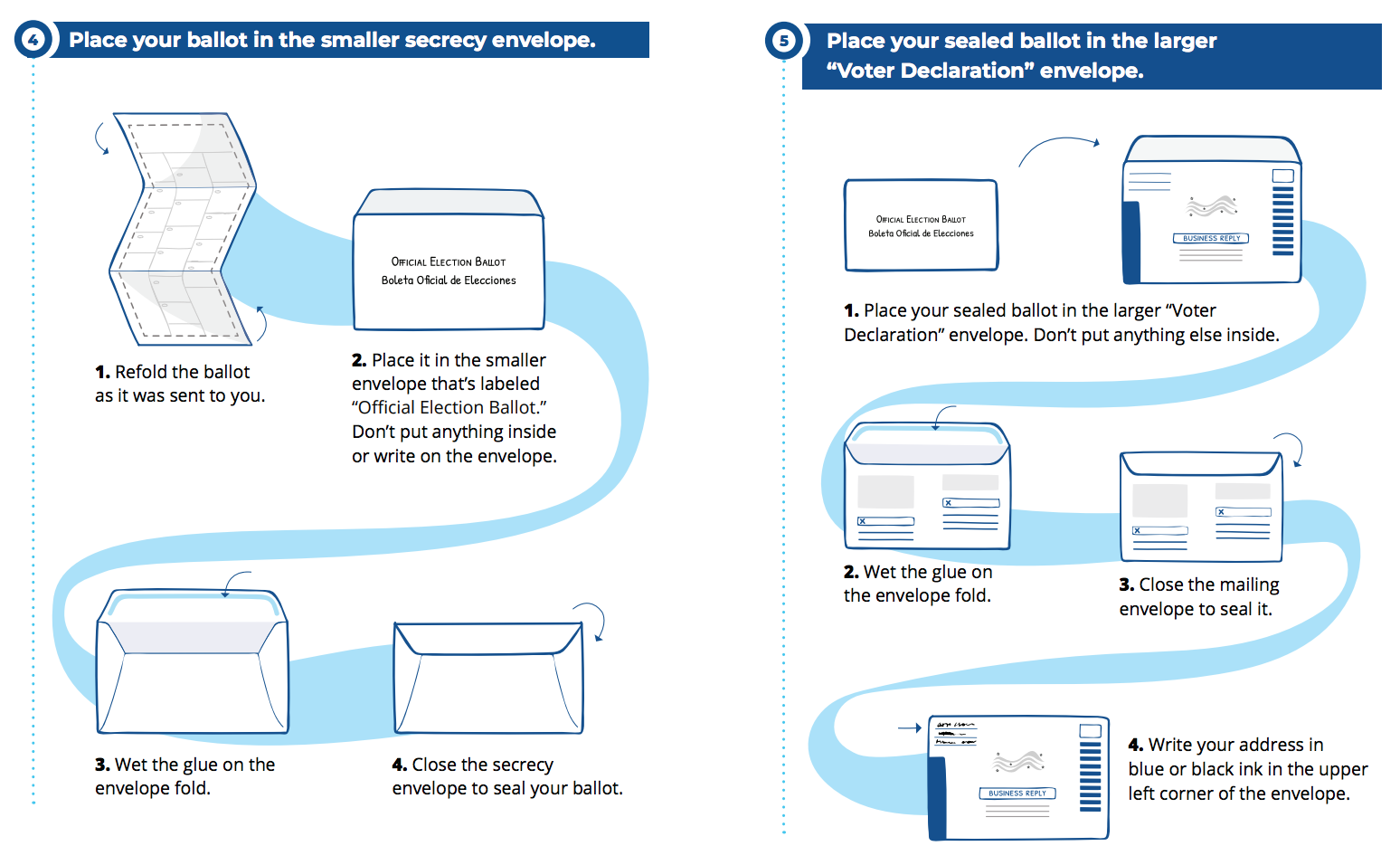 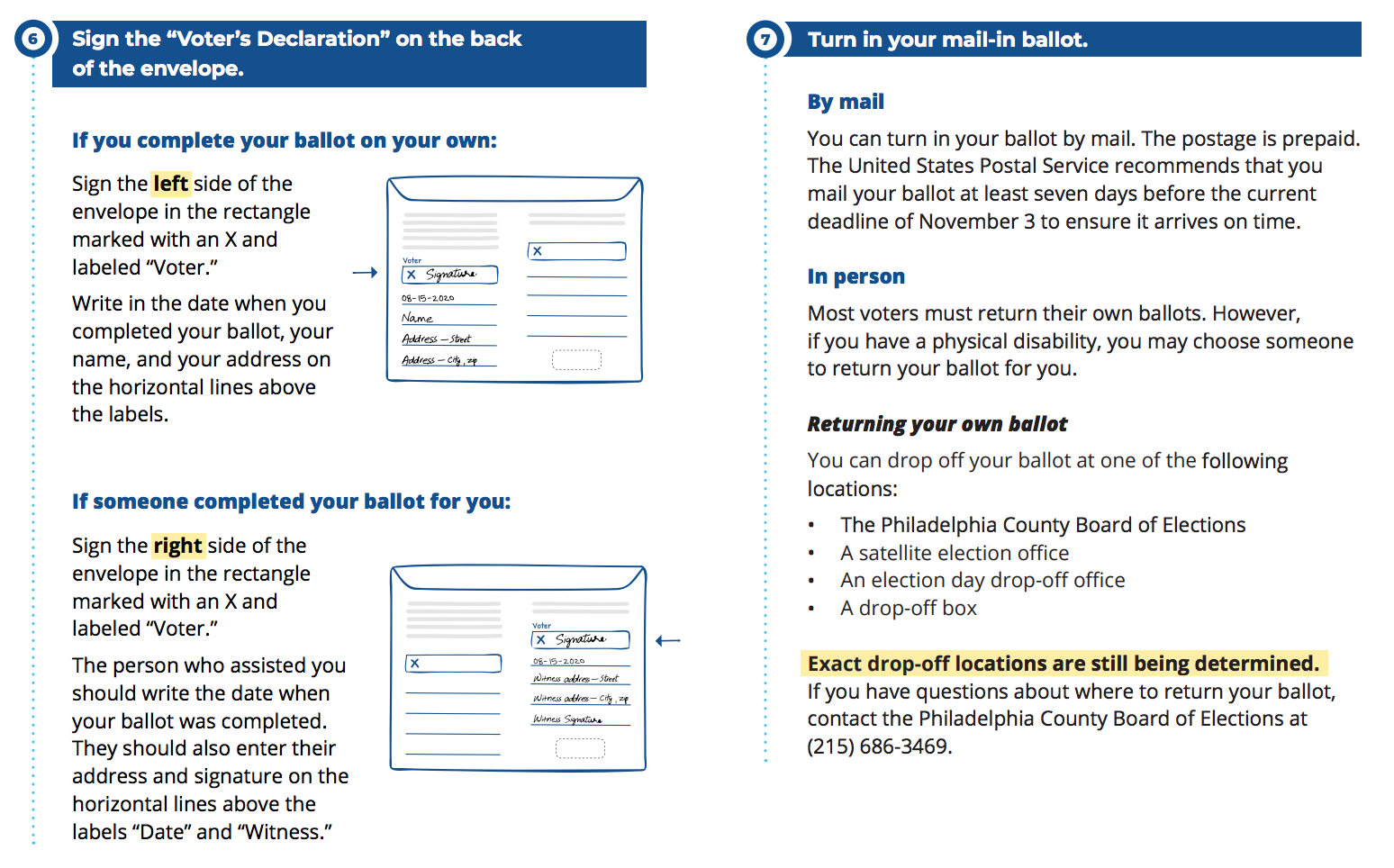 We also love these original memes by Caroline Tiger, a committee person in the 2nd Ward. Have something creative you think could catch on and help get the word out about this? Send it to us at [email protected] and we’ll include it in a future newsletter crediting you. Most Polling Places Are Confirmed

The City Commissioners announced another tranche of confirmed polling places this week, with just a few hundred locations yet to confirm.

View the list to see if your division’s polling place is on there.

The city has approved locations for 1,440 polling places (out of 1,703 divisions in all), and the locations approved so far are all divisions that will be returning to their November 2019 locations.

There are still 263 divisions remaining without confirmed locations. Most of these will likely be proposed to move to new locations for various reasons, including public health considerations. The board will be voting on these at their upcoming meetings in the next few weeks. The list of confirmed locations is still subject to change, but we can assume most of them are locked in at this point.

GOP Response to the PA Supreme Court: Burn It All Down

The PA Supreme Court tried to settle many of the issues in the election, but PA Republicans are laying the groundwork to appeal that decision in federal court, where a lawsuit by the Trump campaign is still alive.

Republicans are asking the Western District of PA to specifically strike down the PA Supremes’ decision extending the deadline for counting absentee ballots until Friday, November 6th at 5:00 pm. Military and overseas ballots are still accepted a week after the election, so there is precedent for accepting them after the date.

That would cause some chaos, if successful, but not nearly as much chaos as throwing out the results of the vote and appointing some random Republican electors to hand the election to Donald Trump, which is apparently something that could happen in the United States of America in 2020.

Pennsylvania top Republican officials don’t deny they’re considering taking things there in a rather frightening piece in The Atlantic about the democracy doomsday scenario.

According to sources in the Republican Party at the state and national levels, the Trump campaign is discussing contingency plans to bypass election results and appoint loyal electors in battleground states where Republicans hold the legislative majority. With a justification based on claims of rampant fraud, Trump would ask state legislators to set aside the popular vote and exercise their power to choose a slate of electors directly. The longer Trump succeeds in keeping the vote count in doubt, the more pressure legislators will feel to act before the safe-harbor deadline expires [...]

In the most recent poll, Joe Biden had a 9-point lead over President Trump in Pennsylvania, and on average he's been polling about 5 points ahead lately, so it’s unclear whether this will ever really go anywhere. The strategy relies on Donald Trump being ahead in the count on Election night and for several days after, and then stopping the counting of mail-in ballots somehow. It’s unclear whether this could get past the Pennsylvania Supreme Court, where Democrats currently enjoy a comfortable majority, and which would presumably be strongly disinclined to stop the count prematurely.