Philly Needs A Plan to Capture More of the Region's Growth 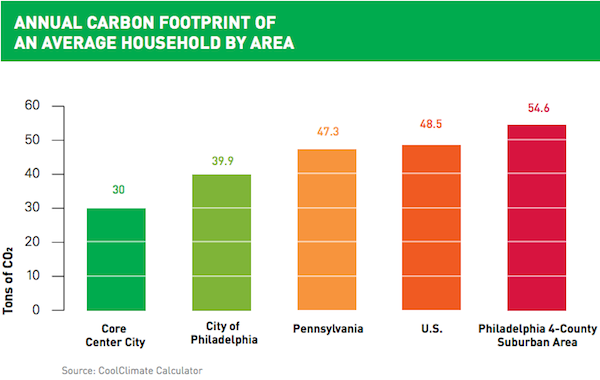 One of the more disappointing aspects of what we know about the Kenney administration's Housing Action Plan is the lack of a regional perspective on how we want the Philadelphia region to grow.

For a whole host of reasons—namely climate, jobs, and transportation—we all would be a lot better off if the city of Philadelphia, and specifically neighborhoods with good transit connections to jobs, were to take in the lion's share of all population growth in the southeast Pennsylvania and southern New Jersey region going forward, and the surrounding suburbs were to take in very little.

People's per-capita greenhouse gas emissions go down when they can live and work in dense urban areas, and go way up when they live in low-density, drivable areas. It's greener to live in the core Center City area than it is to live elsewhere in Philadelphia, and it's greener to live anywhere in Philadelphia than it is elsewhere in Pennsylvania, on average. The least green place to live is in the suburbs, where people have to drive everywhere, and the land use footprint of everything has to be made excessive to accommodate all the car travel.

Cities benefit from so-called agglomeration effects, where people and firms are more productive at greater densities. As a worker, it's good to live in a place with lots of potential employers or opportunities relevant to your skills than it is to live somewhere with fewer employers and opportunities. Wages are higher in central cities, and there are more opportunities for specialization and advancement. As a firm, it's better to locate in a place with a larger and more specialized pool of workers than in a place with a smaller, less specialized one.  And a harder to quantify aspect that makes this all add up to more than the sum of its parts is the random, serendipitous encounters that are possible in dense cities where people can walk around and bump into people they know all the time.

Today, while going to pick up my daughter, I ran into a neighbor and had a quick conversation that resulted in a connection to a local landscape architect who's going to help out with a neighborhood project I'm working on. That wouldn't have happened if I just drove to work and then drove home. That kind of thing happens all the time in Philadelphia, and it's a key ingredient in the secret sauce.

While there are also additional costs that come with providing public services to more people, on balance, it would be very good for Philadelphia's economy if more people, of all walks of life, relocated here from both our nearby suburbs, and from our very expensive neighboring cities in New York and Washington, DC.

This has already been happening, to a degree. Joe DiStefano reports that Philly is the only large city in the country right now that's still growing faster than its suburbs after a few years of more urban-centric growth. And the journalist Matt Katz recently wrote an incredible piece for the New York Times about the international migration Philadelphia has been seeing as new immigrants arrive in New York and then eventually find their way here. Anecdotally, I've been noticing I'm meeting more people from Washington, DC who saw more opportunities to work somewhere other than the District with the Trump administration in power.

More people, more diversity, and new ideas from all over are a strength, and welcoming new people and new ways of doing things has increased the vitality of a great many of our neighborhoods and commercial corridors. We have to be intentional about keeping it going.

A Housing Action Plan that started from the premise that we want more people of all backgrounds relocating to Philadelphia from both expensive cities and nearby suburbs at a higher rate than they are now, and then designed our housing policies to try and make this happen would likely find success. If we built more homes in Logan Square or Callowhill, more people would use them. Or if we tried to take in a larger share of Pennsylvania's refugee population, or tried to facilitate more hurricane victims from Puerto Rico joining their families here, that would probably work too.

Unlike global economic powerhouse cities like New York City or San Francisco, there's likely a finite number of people who'd want to live in Philadelphia, but we've got the space, we've got the infrastructure, and it can't hurt to try and pull in everybody who's interested with a housing policy and economic approach that tries to make room for everybody.