What the Early Evidence Says about Philly's Mixed-Income Housing Program

The Planning Commission released their report last week on the first-year performance of the 2018 Mixed-Income Housing program, which City Council adopted in fall of 2018 as a compromise at the end of a big debate over mandatory inclusionary zoning, and has been talking about expanding more recently.

As part of that deal, the Planning Commission was tasked with reporting on the program, and we finally have some official numbers on how the program has been performing.

Council originally projected for the program to raise around $3.6 million per year but the results surprised everyone with a projected $8.1 million raise instead, some of which is still coming in as projects proposed and permitted in 2019 are completed in 2020.

That’s a bit less than the $10 million estimate in City Council’s Poverty Action Plan, but the point remains that the outlook pre-COVID for this program was more optimistic than Council originally anticipated, and even during the economic downturn, it has continued to raise revenue, including from a big $2.5 million payday coming from a single large project near Rittenhouse Square.

In 2019 seven developments earning the bonus received building permits. The developers of those projects: �

Seventeen developments planning to use the bonus received zoning permits in 2019. If completed, those projects will: �

One of the main takeaways from the report was that everybody is using the in-lieu fee option and basically nobody is using the on-site units provision. That’s partly because Council made the on-site option very hard to comply with, and the in-lieu option very easy to comply with, and the whole structure of it is tilted more toward the goal of raising money for the Housing Trust Fund.

So this is more a case of Council's strategy working as designed, and the result is that the actual production of affordable housing through this program is completely tied to how much the Housing Trust Fund is producing by leveraging the funds. The most recent Trust Fund report for years 2018-2019 indicates that the HTF does a pretty good job of leveraging its budget to help a lot people. With $28 million in funding, plus another $20 million in bond proceeds, the HTF funded around 10,000 home improvements, 4,500 stabilization services, 300 affordable rental units, and 80 new home purchases, which seems like a pretty good return on the public's investment. With more funding from Mixed-Income Housing revenue, they'll be able to do even more.

A few large payments contributed the most total money, but in terms of the most common use cases, RM-1 and CMX-2 zoned lots seem to be the ticket for driving widespread use. 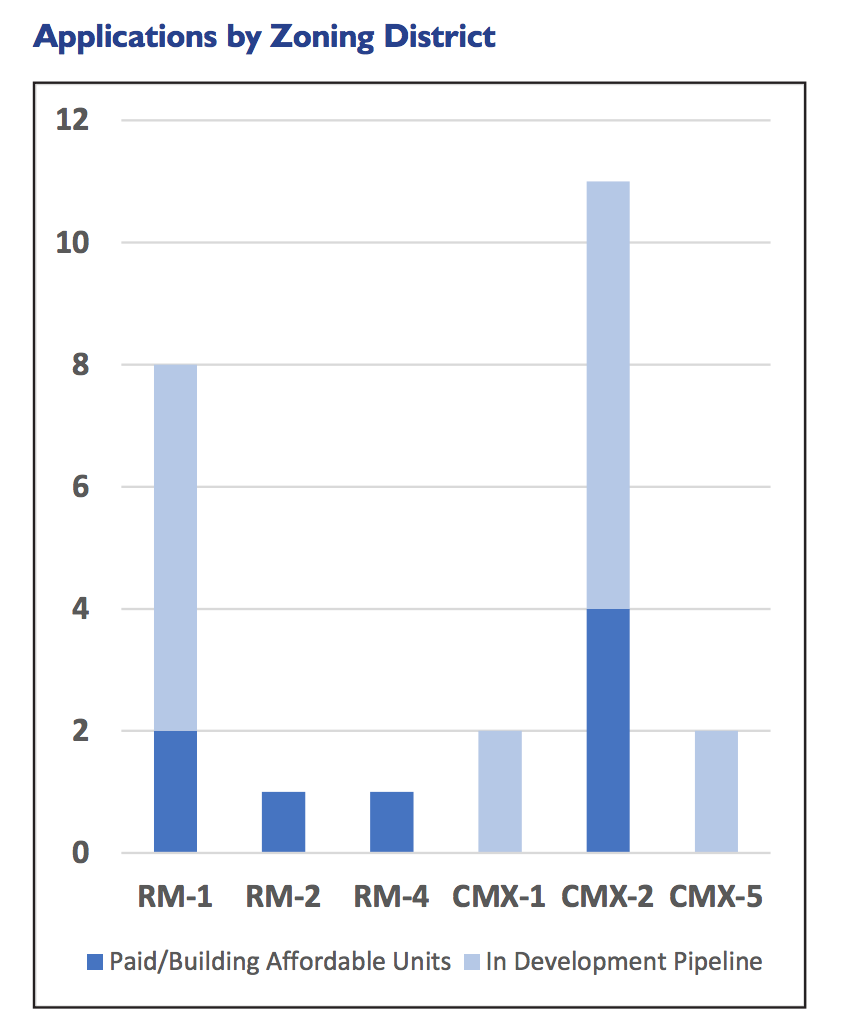 As a general proposition, rezoning more land to RM-1 and CMX-2 likely increases revenue to the city from the Mixed-Income Housing Program. RM-1 has exactly the same dimensions as Philly’s standard rowhome zoning district (RSA-5) and still allows for a single-family rowhome, but RM-1 always allows for multiple dwellings and is eligible to use the program while RSA-5 isn’t, so there’s a fairly straightforward path to raising more Housing Trust Fund revenue through rezoning if Council really wants it.

Where it could be argued the program is falling short is on the integrated housing goal, which is really the beating heart of the inclusionary zoning idea. IZ was conceived to be much more a desegregation tool than a significant source of housing units for very low-income people. Philadelphia’s program is much stronger on the second point than the first, since the Housing Trust Fund is much more geared toward this than providing middle-income housing of the sort you get with on-site below-market units. Some on Council understandably want to retool the program to try and encourage more on-site affordable units. In doing so, they should be careful not to do anything that would reduce the program’s overall popularity or cost the Housing Trust Fund money at a time when it’s already on the chopping block in the city budget.