Philadelphia's Revenue and Spending Are Way Up Since 2016. Where Are Our New Services? 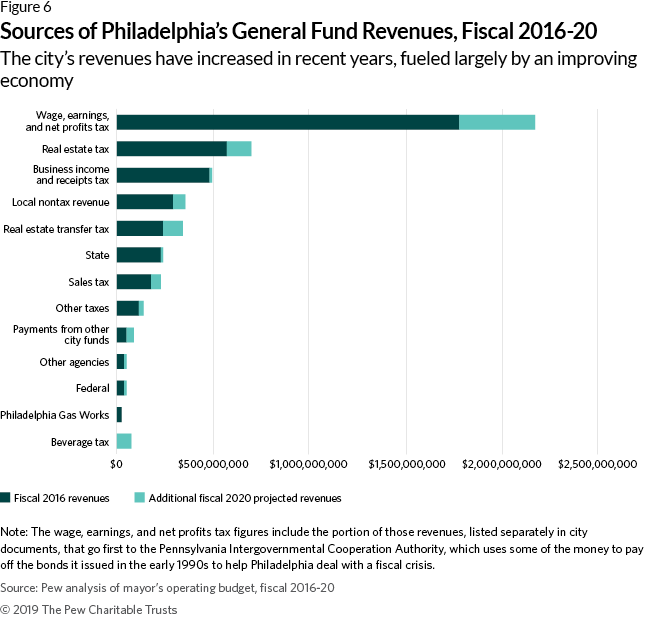 (Philadelphia revenue is up 23% since 2016 | Image: Pew Philadelphia Research Initiative)

As Philadelphia has seen more job growth and investment in the years following the Great Recession, we've seen a lot more tax revenue come into local government as well, and Pew's Philadelphia Research Initiative has a new research brief out looking at where those revenue increases have come from, how elected officials have increased spending in response, and what they've spent it on.

On the revenue side, the biggest drivers of tax growth between 2016 and 2020 have been the wage tax by far, followed by the real estate tax, and the real estate transfer tax, and all told, the 23% increase in tax growth has powered approximately $905 million in new spending during that time.

Pew compared this to the spending growth in other large U.S. cities and found that we're somewhere in the middle of the pack overall and also on a per-capita spending basis. The really interesting part though is where the new money's been going, which is helpful to see as a corrective to some of the popular conceptions about where it's been going.

The rest of the $905 million overall increase was spread across several city departments and programs, only the largest of which are shown in the figure below. One notable item was a first-ever deposit of $34 million into the city’s rainy day fund, meant to help officials deal with the next economic slowdown. There were some decreases in spending in departments and programs as well, including the prisons department.

What's notable about this is that so much of the spending growth has just gone toward maintaining the current service baseline, with very little of the $905 million increase going toward any new services that most people would recognize, with the exception of the pre-K and community schools programs, which are still far from universal at this point. The School District got a decent bump of $118 million, which, while objectively a lot of money, still doesn't come close to fulfilling the major backlog of needs or wants in the school system. Certainly many teachers and students and other workers will be seeing improved working, teaching, and learning conditions as a result, though to a large extent we're really just maintaining the baseline.

Once the Rebuild program finally gets started working on capital projects at local parks and libraries, that will be one of the first genuinely new things most residents will see from the nine-tenths of a billion dollars in new spending.

This is a big reason why the City's extreme stinginess around providing some of their basic municipal quality-of-life responsibilities, like street sweeping, street and sidewalk repaving, or tree maintenance is so strange. There's obviously some money there—clearly, if there's enough to make 532 new hires in the Police Department—and it wouldn't even be that expensive to move some of these activities out of the land of volunteer magic and municipalize them.

The fact that so many people see their property tax bills going up every year with no real noticeable impact in the quantity or quality of municipal services just makes for a really cynical politics around taxes, and delegitimizes local government in ways that are politically corrosive. It's a problem for those of us who want to see local government accomplish big things, and provide better and more universal public services. People need to see what city government is doing for them if spending is going to keep going up.

In the last citywide quality-of-life survey from 2017, respondents named streets and sanitation as the city services most in need of improvement. We're still waiting on the results from this year's edition, but it seems likely it will remain high on the list, if not the top concern again. If that's the case, Mayor Kenney should consider stepping up the City's quality-of-life services in visible and cost-effective ways like a citywide mechanical street sweeping program that reaches everybody, unlike the misguided leaf blower pilot.